originally posted by: Bedlam
a reply to: IAMTAT

I can't see crap on the recording, TBH. It's just amazing they couldn't turn on the camera's light.

Maybe you need new glasses, the static to the hair is easily viewable. A bright light behind the subject shows strands of hair standing straight up. It might be a better video if it were recorded under better light conditions, maybe with several subjects walking together. Whatever, it appears to be a real effect to some kind of energy.

Is there any indication of this being a hoax?

Electrostatic fields of this magnitude are rare. And since it allegedly happened outside of Google's London offices is even more intriguing. Especially given the date was close to the time Google acquired DeepMind.

Apparently, others have since experienced the effect on location, though, to my knowledge, it hasn't been shown to be a hoax.

At first, many viewers simply said the jolt in the video looked fake or a possible hoax meant to scare people passing by the Google office on the London city block. However, a couple of other clips have also popped up online showing that their hair is also standing up on end near the building, so perhaps there is a possibility of some mystery going on there.

For their part, officials from the UK Power Networks company did visit the site of the purported “beam” on Monday. Whether static electricity was present in the area was not distinctly mentioned, but a crew confirmed the location was very “safe.”

Multiple people have reported being zapped by a field of static electricity outside the building, and they have started videoing it to prove the weird phenomenon exists.

Google declined to comment on this story when reached by Business Insider.

Reddit user "master_poop" was one of the first people to discover the strange electrical field, posting a video which shows his hair standing on end.

There's even an audible "buzz" from what he guesses is static electricity.

After posting the video online, he explained that both of the people featured in the video had since suffered from toothache, and he had even had a small nosebleed.

Some people on Reddit dismissed the video as fake. After all, people often try and game the popular site by inventing weird phenomenon. They can earn money if enough people watch their videos through ads on YouTube. But more videos have come to light showing the same electricity field outside Google's office.

Back in September, YouTube user "LessAmazingPhil" uploaded a video showing his hair standing on end at exactly the same spot outside Google's London HQ.

And there's even a third video showing another man standing outside Google's office with his hair standing on end from some kind of static electricity field.

There are a number of theories for what might be causing the strange build-up of electricity. Some people theorise that there could be a problem with electrical wires underneath the street outside Google HQ.

Others guess that the design of the building could be to blame. They claim that the building features a mesh of metal poles that could generate static electricity.

Despite reports of painful tooth fillings and nosebleeds that may have been caused by the electrical field, UK Power Networks has investigated the area and declared it safe.

Earlier today, workmen were seen outside Google's office, digging up the exact spot where the electrical phenomenon was taking place.


There's a cool update video from a guy called cench that thinks the AC unit at the restaurant downstairs is generating the static. He also shows a lot of construction going on where they have dug up the road and sidewalk checking for power "leaks."


He made a quick schematic of his theory: 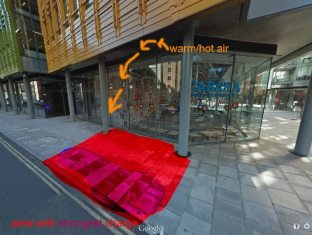 He detailed his observations and theory pretty thoroughly on Reddit.

In a discussion thread on Globalspec.com a couple of the posts indicate there is a grounding condition that can occur with compressors that cause static buildup in the system. So that seems as good a theory as any...for now.