Following the refusal of the Beavercreek Chief of Police to meet any of the very reasonable demands of the Ohio Students Association and other protesters against the shooting of John Crawford by Officer Sean Williams, the “hacktivist” group Anonymous initiated Operation John Crawford early last month.

Masked AND armed! Honestly this is what we need. We need to start showing that were serious.

Ive been thinking about it a lot lately and i think my generation is lacking a voice. I hope we find our ground here with these 2 issues and start taking serious steps towards making real change happen.

Because, is it not obvious, armed conflicts and masks solve everything.

Yeahkeepwatchingme
+1 more
posted on Nov, 23 2014 @ 03:48 PM
link
Good for them. This country's ridiculous and nothing's going to change by paying attention to tv and Bill Cosby. S + F our priorities are so messed up.


Masked AND armed! Honestly this is what we need. .


i cant believe how bad this world sucks right now......i shouldnt be surprised but i am

Well, they better get in bed with the IRA now, because short of that, they don't stand a chance against the US military. ;p

I'll just say if the system wasn't so oppressive it wouldn't be getting crazier and crazier each day. Sure the citizens are to blame for becoming complacent and distracted but without the oppression there'd be no oppressed.

This is plain and simple just more extremism. This is the last thing this country needs, "An American spring"

It's not our government that makes this country great, it's the people. Don't turn on each other over nonsense we can work through these issues without violence.

masked, armed protestors/demonstrators/whatever you want to call them does not exactly make me feel warm and cozy.

I guarantee everyone here that now, "nothing" is not going to happen.

I normally don't care for protests and protestors because they are often paid shills, but I am in support of this action. This seems to be an organic rebellion against injustice and police brutality.

Neither does police with tear gas.

Lighting up a cigarette in your mouth using a flame thrower is "different", too - this doesn't mean it's a good idea.

WASHINGTON — The number of felony suspects fatally shot by police last year — 461— was the most in two decades, according to a new FBI report. 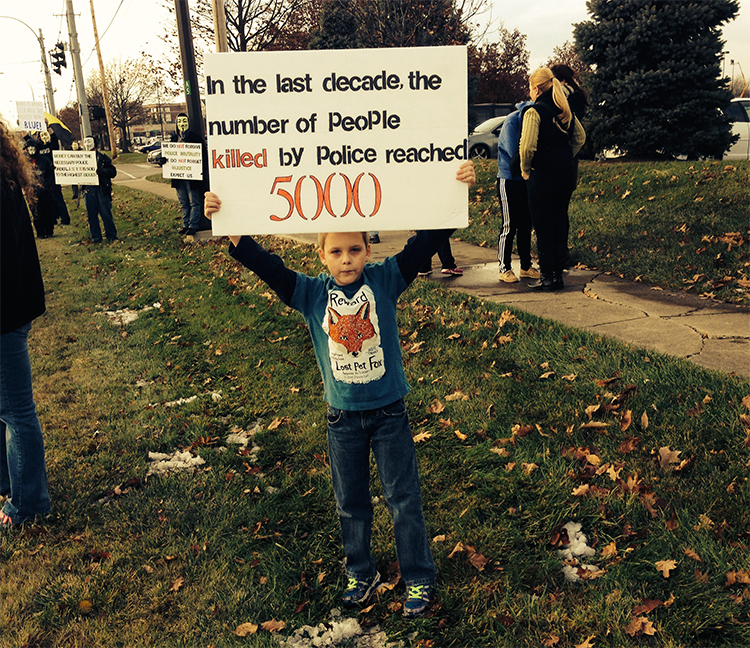 originally posted by: onequestion
Masked AND armed! Honestly this is what we need. We need to start showing that were serious.

Just make sure you aren't one of the people here complaining when the police respond to these criminals..

EDIT
Not quite a swarming of a store like your headline says.

I also love the hypocrisy of Anon fanboys (not saying that is the OP)..Someone else is judge , jury and executioner = righteous outrage!
Some script kiddie in a fawkes mask though has the right to do the same.
edit on 23-11-2014 by opethPA because: (no reason given)

originally posted by: Metallicus
I am in support of this action. This seems to be an organic rebellion against injustice and police brutality.

The protestors are becoming like those against whom they protest in the first place.

I wouldnt mess with a guy with a flame thrower.

Police would respond with lethal force if these people got tired of being ignored and stormed a public building to make dialogue happen. Its not like dialogue and amends DONT HAVE TO HAPPEN.

Showing that there is not exclusivity to force is not a bad thing. They didnt shoot anyone right? Then all is well. Being armed will be the only thing that will change the response in this situation compared to the COUNTLESS ones just like it where nothing happens.

EDIT TO ADD:
Its not even that strange. We have been conditioned to see this as extreme, but read some news from even a decade ago or from other places on earth. Its actually a normal reaction believe it or not.

posted on Nov, 23 2014 @ 04:05 PM
link
And what injustices are you fighting for? What non violent tactics have you seen work? Everytime I see a peaceful protest the cops use force. I am American, I love my country, but it is going south fast. I support the people, and the people need to support eachother.
a reply to: swanne

Yup, no issues with legal protests and hopefully that is how it remains.