Were Neanderthals a sub-species of modern humans? New research says no

posted on Nov, 23 2014 @ 09:32 AM
link
In the countless research directed to the human origin, we all know the place Homo Neanderthalus takes. For a while evidence has shown that Neanderthalus is not a human subspecies but a different species. A new study done by SUNY Downstate Medical Center supports the growing evidence that Homo Neanderthalus is a totally distinct specie, separated from Homo Sapiens.

Samuel Márquez, PhD, associate professor and co-discipline director of gross anatomy in SUNY Downstate's Department of Cell Biology, and his team of specialists published their findings on the Neanderthal nasal complex in the November issue of The Anatomical Record, which is part of a special issue on The Vertebrate Nose: Evolution, Structure, and Function (now online).

They argue that studies of the Neanderthal nose, which have spanned over a century and a half, have been approaching this anatomical enigma from the wrong perspective. Previous work has compared Neanderthal nasal dimensions to modern human populations such as the Inuit and modern Europeans, whose nasal complexes are adapted to cold and temperate climates...

Which makes you wonder is it not possible that both Home Sapen and Neanderthal both originated from a sapient species as after all they did have at least limited genetic compatability making them essentially two distinct breed's of the same species who though adapted to different environment's were in fact first cousin's more genetically compatible than a horse and a pony as they managed to produce viable offspring.

posted on Nov, 23 2014 @ 12:28 PM
link
Great Post.
This old news, I am just waiting for the new propaganda machine to try to place the neander above the rest of the human family.
Just watch how much 'history' and 'facts' come out to make them appear "superior".
I always had a problem with this idea because it opens so many doors. Alot of scientific parties suggest all Non-African people have neander dna.

Same sh*t different toilet and its getting old.
So does this confirm the indigenous traditions and history about the wars and contact with the "others" and teaching the grunters how to speak and write, clothe and wash themselves.
This makes one think.

It is going to be pretty hard to remove Africa from the center of everything. People were trying to do that with theory and no evidence to suggest otherwise except fictitious mistranslated aryan myths/fables. Look at the globe, it is virtually the only continent that hasn't moved but others have moved away from it. The symbolism there is huge. Lets say Africa is NOT the birth place of the entire human family, you still would not be able to say that it isn't the cradle, elementary-highschool, and original college of the planet.

I wish I could find the article that explains how people of neander descent did not even have the genes to articulate, express themselves, or talk before 6000 years ago. Which would explain europes fascination with 6000 years ago. Once upon a time the world was only 6000 years old according to the brightest european minds at the time, and those same minds compiled and tried to translate scriptures and tried to even use the bible to exclaim this falsehood.

This could get sticky.
edit on 23-11-2014 by AKINOFTHEFIRSSTARS because: (no reason given)

posted on Nov, 23 2014 @ 01:00 PM
link
Designating what is a species and what is a different one has always been a difficult problem. At what point does a common heritage split into two?

As noted HSS has HSN DNA so some intermixing occurred. Whether HSN was a species of his own or just a 'flavour' of HSS is probably unimportant in the long run.

originally posted by: LABTECH767
a reply to: Telos

Of course I do keep that in mind. There are anthropological finding that show that homo sapiens and neanderthals did in fact interbreed. Creating a subspecies as a result is acceptable. But the view and proves that Neanderthals were a totally different species, you have to admit it, is quite exotic.

posted on Nov, 23 2014 @ 02:36 PM
link
What do you guys think of the Asperger's/Neanderthal theory? When I read some of the points they clicked with me but that could just be my particular case. S + F

"neander descent did not even have the genes to articulate, express themselves, or talk"

You don't really believe this do you? Even our fellow animals of Earth can do this.

Interesting, this is a study science daily also posted about Neandertal & the early human relationship.

Re-examination of a circa 100,000-year-old archaic early human skull found 35 years ago in Northern China has revealed the surprising presence of an inner-ear formation long thought to occur only in Neandertals.

"It suggests, instead, that the later phases of human evolution were more of a labyrinth of biology and peoples than simple lines on maps would suggest."

This story is not over by a long shot

posted on Nov, 23 2014 @ 08:46 PM
link
With the emerging information on Neanderthals lately, this seems very likely. It accounts for the differences in people, the percentages of Neanderthals in the genes. While not all of the gene variants carried over to certain populations such as MC1R(hair color and more), new findings are coming forth about what carried over.

This is new news? I thought it was decided when the draft genome was published 4 or so years ago? Perhaps they were still arguing over it, but it seemed to be cut and dried then.

posted on Nov, 23 2014 @ 09:28 PM
link
I thought that it was fairly well established that Neandertals were a separate species and that we both are descended from Homo Heidelbergensis. I believe that Neandertals died out because they intermarried with Homo Sapiens. Most of the hybrid offspring were possibly infertile as the parents were from different species. They would not have understood this until it was too late.

Their track record has demonstrated a complete lack of credibility.

This whole Neanderthal thing is a total complete fabrication... 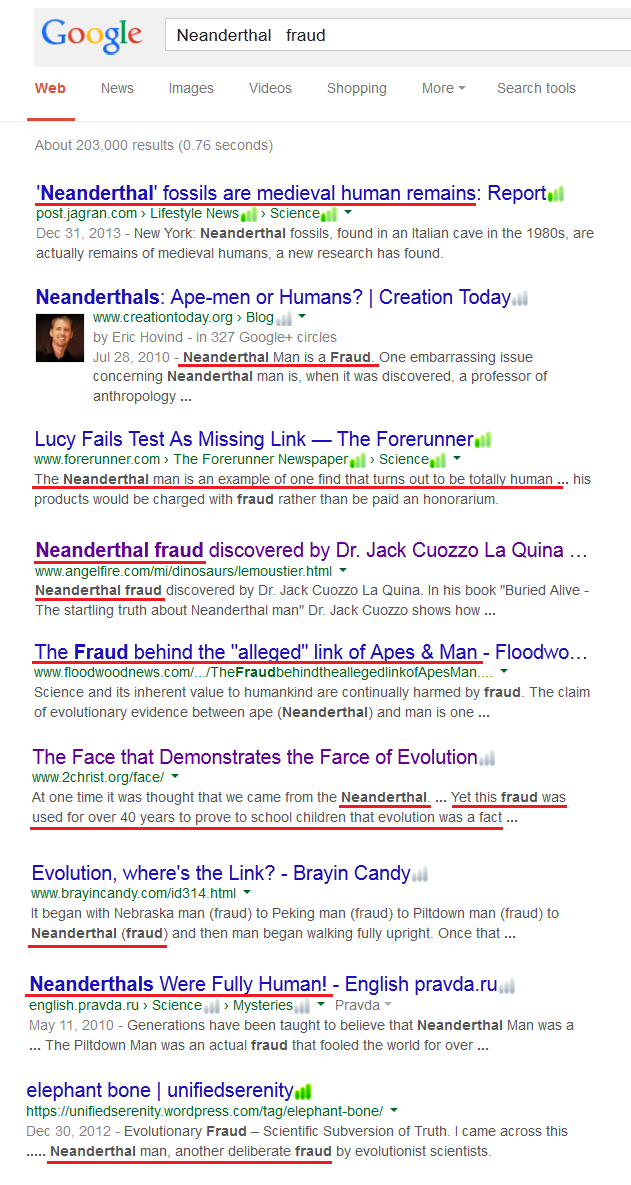 "Primitive Man never existed, and there never was a Stone Age. They are nothing more than deceptive interpretations of (Neanderthal Findings) by Evolutionist." THE NEPHILIM WERE MORE "INTELLIGENT" THAN HUMANS. So the Word "Primitive" is an Understatement. The Size of their Brains Reveal they were Super-Intelligent The Stone Age Deception

By the way, Neanderthals were not emerging primitives. That’s fiction. They had a skull capacity larger than that of modern man. Classic descriptions of so-called Neanderthal man were based in large part on the skeletal remains of a man suffering from severe osteoarthritis. He had degenerated. In fact, there are folk who would pass for Neanderthals, alive today. Aliens The Deadly Secret (Page 347)

Dr. Jack Cuozzo shows how many Neanderthal fossils have been tampered with to support the theory of evolution. One of the many fraudulent things that people have done to the Neanderthal skulls is to reconstruct the lower jaw in a forward protruding position. This is based on the preconceived notion, that Neanderthal was dimwitted, and ape-ish. The jaw is purposely manipulated to look this way in reconstruction’s, because that is how some ape jaws are aligned.

Of the thousands of people who have seen Neanderthal skulls in a museum, I wonder how many of them knew the jaw had been altered? Dr. Cuozzo adds: "The exact same thing happened with the famous La Chapelle-aux-Saints skull and jaws" The La Quina V skull has also been altered. Now look to see what somebody did to the chin. They cut it off to make it look more like an apes chin. They then smoothed it all out with a plastic material.

"About every few years they come out with the new missing link, only to find out the link is either another species or a fraud. And this happens over, and over, and over, and almost no one ever questions this, and joe public just believes what ever the news media tells them." What part of Evolution is a lie?

Neanderthal man cannot possibly be a missing link."These Neanderthals are just perfectly normal humans that are living to a really great age." See, before the Flood came, the people lived to be 900. But after the Flood, life spans dropped off to 400, and then 200, and then 100; but that's still a long time to live. And it's a simple fact the bones of your eyebrow ridge never stop growing. Jack Cuozzo

Professor Reiner Protsch was invited to date the famous skull, which he later pronounced to be the vital missing link between Neanderthals and modern humans. He dated the skull at 36,000 years old, allowing it to fall neatly into the evolutionists’ timeline between Neanderthals and modern man. For evolutionists, it was too good to be true. And indeed, it was. On February 18, 2005, Protsch was forced to retire in disgrace after a Frankfurt University panel ruled he had “fabricated data and plagiarized the work of his colleagues” Once believed to be a world-renowned expert on carbon dating, Protsch’s entire professional career is now being questioned. The university noted: “The commission finds that Prof. Protsch has forged and manipulated scientific facts over the past 30 years”. Neanderthal (another deliberate fraud)

originally posted by: Noinden
a reply to: grumpy64

That's why I suggested that most, not all, offspring may have been infertile. And yes sapiens have introgression from Denisovans and Neandertals and probably some others as well but these events were not common. And yes the reasons for Neandertals dying out are still and will always be debated.

You are always good for laugh Murgatroid!

Its more likely that the breeding was limited. There is strong evidence neanderthals were well on the way to decline as a species when sapiens came knocking for a date. They had a bloody good run as a species however.

posted on Nov, 23 2014 @ 10:16 PM
link
they used to be called the missing link between us and the apes
but sure they might have been advanced race
during times of Atlantis ?