[Mod Note]
AboveTopSecret.com takes pride in making every post count. Please do not create minimal posts to start your new thread. If you feel inclined to make the board aware of news, current events, or important information from other sites; please post one or two paragraphs, a link to the entire story, AND your opinion, twist or take on the news item as a means to inspire discussion or collaborative research on your subject.

- a brief description
- a link and short quote
- YOUR thoughts, comments or opinion on the matter.
edit on 19/11/2014 by Sauron because: (no reason given)

posted on Nov, 18 2014 @ 11:39 PM
link
Just Putin feeling around for a way out of things. Looking for a way to cut a deal and save face at the same time. Russia is in bad shape and even if santions ended today with the Ruble worth nothing and Russias credit rating just above junk it will still be a hard road for Russia ahead. These oil prices are murder on Russia who really has not much more to count on.

I guess Russia didn't learn from the past.

Deals made with Western Elite mean nothing. They will still look for ways to if not outright destroy you, then damage you over time.

originally posted by: MrSpad
Just Putin feeling around for a way out of things. Looking for a way to cut a deal and save face at the same time. Russia is in bad shape and even if santions ended today with the Ruble worth nothing and Russias credit rating just above junk it will still be a hard road for Russia ahead. These oil prices are murder on Russia who really has not much more to count on.

As usual you are wrong on everything.

Oil prices are killing guess who, Canada of all countries. Don't worry about Russia, they made a 400 billion deal with China on gas supply.

Russia will survive you and your bias and thrive, this isn't the 1970-80s anymore. Don't worry

Putin's asking for guarantee's about Ukraine and it remaining in the soviet bloc (like it always was) and not joining Nato.

After all, we wouldn't allow a Russian state on our door step (remember Cuba?)

Of course, all the anti Russian - pro American lunatics will bash Russia and Obama and claim victory over the universe.

But this, is a positive step. If people want peace and stability they'd move on this and open discussions. I don't expect the west (and people on this board) to ever entertain that notion though.

originally posted by: Agit8dChop
I guess Putin went home from the G20 understanding the world was turning against him.
So this is a positive step in my mind.


Funny you should write that.

Western line of thinking is exactly what you wrote and is repeated on western sites all the time.

But Eastern sites and chats, draw completely different conclusion. They think of it in terms of Putin gave them THE FINGER by leaving early.

The US got humiliated by China at the APEC meeting, and at the G20 the US and it`s vassals showed how much their buts hurt.

China got lashed out somewhat because of that, but Russia was the more easy target.

The reactions of the West only showed what just had happened.

posted on Nov, 19 2014 @ 01:51 AM
link
Ukraine is a sovereign nation and can broker whatever deals they wish, especially around their own security and economic development.

It is crass arrogance - in these post Cold War times - for Russia to dictate what a sovereign nation can and cannot do.

Could it be that Russia fears that if NATO was in Ukraine they could not threaten and bully?

Except the trade deal with RUssia was a strong arm tactic Putin used against Yanukovych when he was about to sign the EU deal.

Putin tells Yanukovych he and Ukraine face losing Russia trade if they go to the EU, and the funny part is that by going to the EU it wouldn't have changed the Ukraine/Russia trade deal one bit yet Putin doesn't want to be cooperative and wants everything for himself.

And exactly how would that undermine his economy as other western countries trade with Russia yet they aren't undermining the Russian economy, so that example really doesn't work.

Problem is it isn't RUssias right to dictate anything in a sovereign nation that is not theirs. Ukraine can dictate who they want to deal with and who they want to be secure with and NO RUSSIA HAS NO SAY. Maybe if this was 1989 yes, but it's 2014 and no they don't.

originally posted by: Blister
Um, I do not think the global trade system quite works like that.

I was not talking about trade.

I was talking about Ukraine's freedom to broker whatever deals it likes, without Russian interference. If Ukraine wants to join the EU and NATO, for example, and they make the necessary reforms and so on, then it is not Russia's business

Russia and Ukraine had a trade agreement which allowed for free trade between both nations. The moment Ukraine would have done the same with the EU, Russia would also be wide open to EU products.

Russia naturally would protect their own market (which the EU also does) from flooding by EU products by raising import duties, so Ukraine would lose the Russian market. The EU countries on the other hand have no interest in Ukrainian products.

Because there`s free movement of labour force in the EU, western Ukrainians think they can go work in the Germany, The Netherlands, UK, etc., but even high educated people who have just gotten their diploma are not able to find work in those countries easily. Companies in these countries are not interested in those Ukrainians, even with good papers.

All that`s left for them are nothing more than cleaning jobs or working in greenhouses.

At 1 Jan `14 the borders of those countries became open to Bulgarians and Romanians, but after working for 9/10 months in the greenhouses, almost all go home disillusioned and broke.

So Ukraine ends up just like Greece, Spain, Portugal, Cyprus, Corsica, Sardinia, and parts of Italy and France.

What Russia offered them was in the short term better for the Ukraine. Maybe in the far future they would have been better off with the EU, but with how the EU economy goes and looking at Southern Europe it`s not that likely.

The "rich" EU countries are now shifting huge amounts of tax money to those troubling countries, but it doesn`t help them because they can`t devalue the currency to be competitive again, and at the same time the European institution also costs lots of money. So you can imagine EU citizens of the rich countries and citizens of the troubled countries are not happy with the EU, it simply isn`t working for no one.

But this wasn`t about what was good for the Ukraine and its people, but about the excuses to do economic warfare against Russia to make Russia lose money, so "maybe" there can come a Western puppet government in Russia. Russia has vast amounts of natural resources which the Western oligarchs sure would want to control and is strategically located between Europe and Asia, and just as with chess, whoever controls the center controls the game (World).
edit on 19 11 2014 by BornAgainAlien because: (no reason given)

There's too many what ifs.

The fact is that Ukraine should be allowed to broker whatever agreements it so choses without Russian interference. If Ukraine wants to (for example) contemplate membership of the EU, and the EU are happy for this to proceed, then there may be years of Ukraine implementing reforms. Plenty of time for productive negotiations with Russia. Plenty of time for due democratic process in Ukraine to accept / not accept change.

No ifs about the EU countries not interested in Ukrainian products.

What Ukrainians want doesn`t matter, it`s all about the war of The West against Russia/China/Iran/Syria.

originally posted by: BornAgainAlien
What Ukrainians want doesn`t matter, it`s all about the war of The West against Russia/China/Iran/Syria.

Totally disagree with you. My worldview is not so narrow.

The average Ukrainian lives in a country that is rife with corruption - almost as bad, or worse, than the levels of corruption in Russia. They want change. The last year has seen a realignment of what the majority want, expressed in the presidential and parliamentary elections. Clearly, some people don't want change and Russia is doing their best to exasperate, but you need to roll with a couple of principles.

1. Not every Ukrainian who wants change is CIA!
2. Western liberal democracy is better than what the average Ukrainian is forced to accept.

posted on Nov, 19 2014 @ 05:02 AM
link
I guess NATO won't give such guarantees in public (as they are asked for in public). NATO sharp wording response will follow in a matter of days or hours.

It would be a miracle if NATO or more likely Ukraine government says it doesn't want to enter NATO. But it said so in the past only to change that stance at every change of situation in Donbass. The sides don't keep promises made days and weeks earlier, what to say of decades ahead. If that "guarantee is given", it will win several more months before repetition of situation (Crimea was in March and then Donbass war later).

If such guarantees are not given though, if there is a sharp response as I would expect after all recent freeze between Russia and the West, then the war in Ukraine will get bigger and bigger every next week. Both sides are armed to teeth, and we know that from multiple sources. Lavrov just said the Ukrainian economic sanctions on Donbass mean prep for invasion.

posted on Nov, 19 2014 @ 05:14 AM
link
Is this how threads are made nowadays? Just throw out a link and let everybody figure it out for themselves? 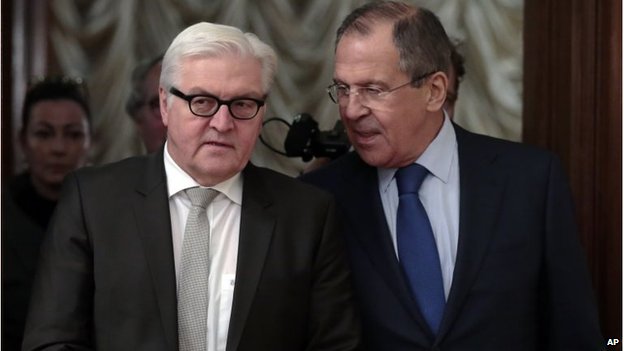 During a joint news conference in Moscow with Russian Foreign Minister Sergei Lavrov, Frank-Walter Steinmeier said that as fighting escalated in east Ukraine he could see "no grounds for optimism".


Am I the only one upon viewing this image and reading what has been said feel that they are two sides of the same coin?

I don't trust either side, who's looking out for the average person in this mess?

Maybe Ukraine after Centuries of dealing with Russia knows all too well and better than most why it wants it's sovereignty and separation from Russia, whether Russia and it's supporters see it otherwise.

Ukraine's refusal is their right. It appears to many that Putin is the one that acts infantile and threatens war when he doesn't get what he wants. Just like he took his ball and went home at the G20 when he was in the hot seat.