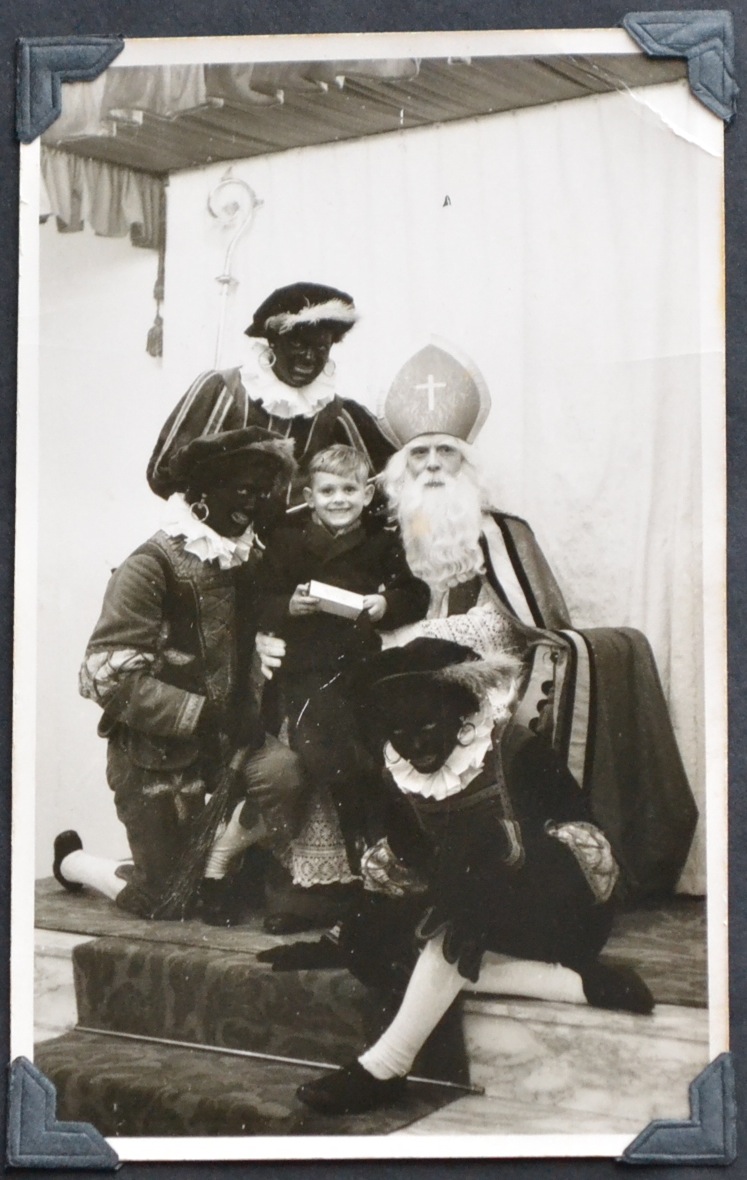 (Yes, that's me in the middle)

One of my favourite memories during childhood was the arrival of old Saint Nicholas by boat to my hometown. In those days, there was only one 'Santa Claus' and, when he disembarked at the docks, he'd be riding his big white horse and the Black Petes would throw candies for the children lining the streets.

However, there was a sinister side to the Petes... they held big bags to collect the bad children and take them away, supposedly to the south of Spain and into slavery (which was once part of the Caliphate). It served to keep the cautious kids well-behaved.

But, today, the idea that people in blackface are tied to a 'good Christian holiday' has become a point of contention. Personally, I'd never thought about it before, but now I'm kind of wondering if the racist connotations aren't a bit much.

Police arrested 90 protesters Saturday as a traditional Dutch celebration of the arrival of Saint Nicholas was disturbed by demonstrators who say his faithful sidekick, Black Pete, is a racist caricature, and by supporters of the popular children's figure.
In some of the worst scenes of unrest in the increasingly acrimonious debate about Black Pete, opponents scuffled with police on the historic market place of the central city of Gouda as thousands of children watched.

posted on Nov, 15 2014 @ 06:55 PM
link
They should hire Sam Jackson to play Pete. White people painted black will be offensive to some.
A real black man saying be good or I'll stuff yo' lily white ass in this muthashuckin' sack would be way cooler.
edit on 15-11-2014 by skunkape23 because: (no reason given)

It's not like there aren't enough people with that particular skin pigment in the 'Low Countries'... it's more a case of traditional blackface going back many years before immigration opened up the country. Personally speaking, I doubt there was much immigration prior to the end of the Indonesian Rebellion against the Dutch colonists. Those that fought with the Dutch in that conflict were allowed to become citizens for their own safety, bringing their families with them. After that, the immigration really opened up.

Don't know what you mean.

Care to expand a bit on your statement?

It's just another case of society retroactively finding offense in things out of context.

The Santa you grew up with used to have a demon instead of Black Pete. I had a friend who celebrates the season with Sinterklaas and his demon. That demon (I can't remember his name) served the same purpose as Black Pete. People wanted to be less offensive so they made up Black Pete to replace the demon. Ironically, now he's considered offensive so maybe they'll replace him with "White Cletus" until that becomes offensive.

The problem I have with this is that the offense seems to be people relating it to slavery. Black Pete wasn't ever African but he was supposed to be Moorish. The fact that people are offended tell me they all assume all dark-skinned people are from Africa which is, in itself, rather offensive. And a bit funny.

So, celebrate your Black Pete demon with your St. Clause and realize that you aren't being racist. Although the black face is a bit stupid and should probably go.

Throwbacks to days gone by , the kind of throwback that should be thrown away, either you are going to view and respect your fellow man in the same light as you, if not then you have a problem and I really cant' sit here to break that one down but one has to look deep in himself, also as you pointed this was symbolic of the Moors and the Visigoth period in History.

The only way some equal footing could be brought to the situation would be if at the same time you have black people replacing these characters in white face, but that really would be missing some of the other dimensions involved, you see it's a bit more complex than that, it probably would not have as much shock value, unless of course it were back prior to the defeat of the Moors and they had a Caliphate and the Mohammedan was the centerpiece in some fashion with Europeans the 3 characters except portrayed by Moors in white face, I think people would understand why this tradition is so lacking in taste then if they saw the symbols embedded.
edit on 15-11-2014 by phinubian because: addding

originally posted by: masqua
I grew up with Black Peters

Schwartzer Peter was part of our December 6th 'St. Nicholas Day'...kind of a weird adjunct to our already strange Christmas Eve celebration. All part of a German household. We'd put our shoes out on the 6'th, when good kids got small treats and bad ones (so we heard) got coal, and the latter would be courtesy of Black Peter. I never thought there was anything untoward about it, certainly nothing to give insult to Blacks. Nor were my folks anything but tolerant of racial diversity at a time when it was not necessarily a popular stance. I seriously don't know what to make of this current foofaraw.

I've spent a lot of time with Dutch families here in Australia. (I'm Aussie). I'm partnered with a fine lady who parents immigrated here in the 60's as kids with their respective parents.

In saying that I'm familiar with "zwarte pete". And the controvery over in the Netherlands regarding the character is dissapointing to them. I add that I'm a bit perplexed by it because to me it's harmless and was a tradition of Holland. Pete to me was Santa's helper although a bit unlike the elves who help our Santas in the shopping malls and pose for photos and the like. I remember the "Black and White Minstrel Show" with similar characters to Pete was a television favourite here back then too.

Perhaps soon they might even find Olly Bolla offensive.

You're absolutely correct on the origins:

Most Dutch don’t connect Zwarte Piet to prior myths rooted in the Middle Ages that always have Saint Nicholas operating in tandem with a servant who, under different names and disguises according to time and place, personifies a tamed Satan. This domesticated devil was often depicted in chains to convey that Nicholas had shackled and enslaved him as a triumph over evil. Several Saint Nicholas customs from other nations continue to depict the benevolent saint in the company of, and in dominion over, a symbolically evil character.

I used to be an attentive observer when my grandmother made Olie ballen before Christmas. They were delicious... just like what people call a 'Dutchie' donut today.

Although I had no problems with Zwarte Pte 'back in the day' when I was growing up and I haven't seen him since I was seven, so it's rather a surprise to me as well. I do know, however, that it was becoming an 'issue' in Holland last year. Now, it's gotten to the point of fisticuffs in the town squares.

originally posted by: masqua
a reply to: the owlbear

Don't know what you mean.

Care to expand a bit on your statement?


Oh, come on...
I actually really enjoyed the whole black peter thing. Amazed I never heard about it as a religious studies major. You have to admit it has some fun connotations.

originally posted by: masqua
Now, it's gotten to the point of fisticuffs in the town squares.

Well then, they're just going to get a lump of coal in their shoes now, aren't they?

So did I... as a 6yr old, but I must admit to not wanting to be carried off to Spain. Rather liked where I was.

I moved to Canada when I was 7 and never really thought about Swarte Pete until this brouhaha got going.

Yeah... and we know who's going to get the lump of coal if Swarte Pete has any say.

Glad you noticed. That was the whole idea... he was supposed to look scary.

posted on Nov, 16 2014 @ 12:06 AM
link
Maybe it is blowing things out of proportion, and reading thing between the lines that aren't there. Black, back in the olden days was used to describe evil. If that was formed out of some kind of racial prejudice, I don't know. What I do think, is that most ordinary people didn't seem to make that connection in their minds. I kinda doubt they went black to imitate black people, but as a symbol of evil. Of course, I could be completely wrong, I don't know, I never lived there.

Ahhh, Olie ballen, I still help making them every year. Used to make sure I was there helping out my wife's Oma each year until she passed away. Poor old dear. Great woman.

Now I make the Olie ballen with my wife's mother and, for an aussie, I'm pretty good at it. If Pete turned up I'd give him a beer.

Well I'm from the Netherlands and whats being played here about Black pete most of us don't understand also black people I know don't understand what the fuzz is all about. What Ive heard is that someoneat the VN started to complain about our National celebration ( Sinterklaas) on the 5th of December.
But we never learn our kids that Black pete was some kind of slave for Saint Nicolas ( Sinterklaas) We always say that hes some kind of very talented man who learns to climb roofs and chimneys ,thats where he gets his color from . I also tell my kids that you can become one if your talented enough.

Now after that this has become some sort of racist issue and maybe history tells it so .I can tell you that you ask some kid around here who black pete is he will tell you some acrobatic person who gives candy and gifts to children in their shoes.

Now the media has come to this idea to show how the Black pete's get their color, so they start white and glide along the chimney and end up to be black from the coal ..