posted on Nov, 15 2014 @ 08:25 AM
link
You really have to wonder if all the dog shooting is not some kind of conditioning.. "If they will do that to a no threat dog what will they do to me or my family" has to run through some people's minds, no? The best control of any population is to control their fears and their thoughts

An example of how any type of shooting, at any time, of any animal, no matter how small or unassuming, can be twisted to serve the officer's needs - this is what he described according to Toledo Blade:

That was his written statement. You can see the actual wording from the police report. The dog never barked or growled (he wrote) and has always been described as sweet - thus, its presence at the office. He wrote that he shot it for the family's safety.

The vehicle owners said the dog was wagging its tail - big surprise. Since officers often say they shoot at threats, this incident and others like shooting a cat, leave people confused and angry.

Only the officer's view is important. Here's what Chief Whitehead said:

What happened that day is very unfortunate. But the only one that will ever be able to justify what he saw is that officer.

The stricken part of his recount continues…

posted on Nov, 15 2014 @ 08:55 AM
link
I've almost stopped reading about this kind of stuff from the police because it has become so common place and just doesn't surprise me any more. When did "Officer Safety" come to be more important than protecting the community and mean you get to kill any thing at any time, just because it scared you? Awww, diddums big bad doggy scare the wittle man? [ spits in disgust ] My opinion of law enforcement could honestly not get any lower. Some want to stick up for them, saying it's a dangerous, thankless job, but they've brought on the hate, distrust and fear all on their own. Shooting a dog because it was walking toward you is just cowardly and I believe most of them are bullies and cowards, hiding behind a badge and that "Thin Blue Line" BS that let's them get away with far, far more than they should. You will never be able to convince me there are "good cops" out there, as long as the bad ones continue to get away with crap like this. Protecting this scum because they are your Brother In Blue makes you just as guilty.

Which doe not match the witness statements... I swear there was a time when police reports were basically believed.. The official line etc etc... I wouldn't believe anything they write up anymore unless there is a video they can't edit from start to finish..

It's getting so surreal I find myself laughing. It's like a crazy vendetta against dogs. I follow Cop Block on FB and it happens ALL the time. Heck I know they do it to cats too because I've heard of ATF agents stomping on cats for no reason. So I google, "cop stomps cat," and I kid you not the second return was an article about cops that hit a dog in a squad car, got out and beat it and stomped it to death. Look!

I mean it's insane. Google police kill dog and you get endless returns.
edit on 15-11-2014 by nukedog because: (no reason given)

The official line etc etc... I wouldn't believe anything they write up anymore unless there is a video they can't edit from start to finish..


Same here. Thats why I added the sarcasm in my post. If you want my honest opinion (lacking the video) I bet he became peeved because they weren't responding quick enough to his commands so he just friggin shot the dog, blowing out their eardrums and any resistance to his "control" of their lives.

But we can't see and I wasn't there either.

originally posted by: smurfy
Do the police still have that, "Protect and Serve" sticker on their cars?


originally posted by: smurfy
Do the police still have that, "Protect and Serve" sticker on their cars? 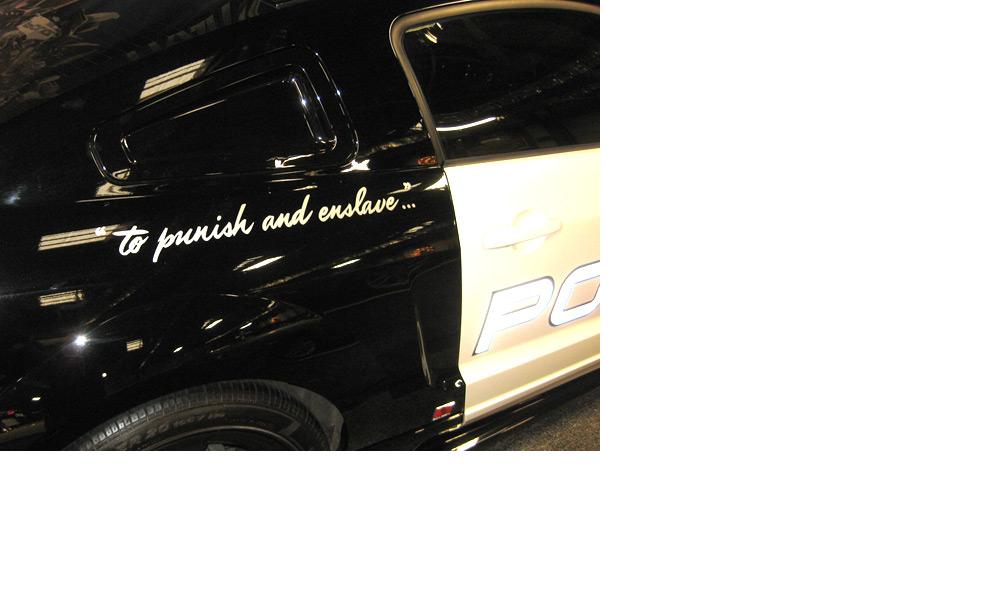 posted on Nov, 15 2014 @ 10:47 AM
link
If a civilian kills or injures a police dog, it is treated the same as if you kill or injure an actual police officer. I know a great deal of families, myself included, that consider their dog(s) as a family member. So I think it should go both ways. You kill my dog because it "approached" you in what you consider an "aggressive" manner? Then you should be charged with murder. Of course, there are situations where there are big dogs that are vicious and the officer truly feared for their safety. This I can understand. However, most of the incidents I read about, the dog is small to medium size. I just don't see any justification in shooting a dog of that size even if it is acting aggressive.

originally posted by: smurfy
Here's one of the latest,

That's the Decepticon police car from the movie "Transformers".

posted on Nov, 15 2014 @ 10:59 AM
link
Fear is always the operative word whenever we here about a coward cop killing innocent life. Can we get rid of all the cops who fear for their lives (all of them) and replace them with courageous, intelligent and discerning individuals who understand the meaning of 'protect and serve'?

If we were to taser or spray Mace at the dog, and it wanders out into the roadway and gets hit by a truck, think of the crucifixion we’d be going through if that happened.

A potential accident (or maybe not) caused by them versus the cold blooded action of just shooting it for no valid reason.

posted on Nov, 15 2014 @ 11:29 AM
link
Off topic to a certain extent, but I'm beginning to wonder if 'they' would be able to hire staff for any given police force apart from the smallest towns, if they didn't hire the sociopaths who weren't locked up quite yet.

Take a look at those photos of riot police all geared up for going up against a peaceful protest (and don't tell me you can't tell the difference between a peaceful protest and one where people are going to start throwing molotov cocktails).

Helmet, face shield, body armor, carrying handguns, rifles or AK47s or whatever, ammo, batons, handcuffs, tasers... have I forgotten anything? Don't forget the dudes in the tanks all grinning at their military toys, BooYaah!

Now what kind of person willingly for meh money puts that gear on when ordered and goes up against a crowd of perhaps 1:10 or 1:100 odds or better? People who live in his own neighborhood? People who know where HE lives?

Add on how many people wanna patrol a city full of meth heads, alcoholics beating on their wives/husbands, being the first to arrive at a suicide or murder, car accidents, all manner of jackasses doing what jackasses do, spending half the shift bored out of their minds and half in stark terror that today will be the day you stop someone on a traffic violation who will have 10 lbs of coke in the trunk and decide offing you is better than a sure thing life in jail?

I know it's not a job *I'd* want. Not many sane people would, given any other option, right?

So what's the solution? Damned if I know. Maybe certain members of the public, say the 10% that are dregs, are ruining it for everyone and the cops are just at the same level or being brought down to that level after a few years on the force, and the management's hesitation at firing their sorry asses is due to the fact that replacements aren't forthcoming...

Ok. Let's run with it

According to new FBI statistics released this week, violent crime rates in the US fell over 4% in the past year alone, bringing the amount of violent crimes lower than it has been in nearly 40 years. The statistics showed that there were an estimated 1.16 million violent crimes in the year of 2013, which is the lowest number since 1978, when 1.09 million were recorded. Read more at thefreethoughtproject.com...


According to the FBI’s annual Uniform Crime Report, 461 felony suspects were shot by police last year, which is the highest number seen in decades. These numbers are likely unreported as well, and only includes felony suspects, so it is possible that this figure is much higher than the study suggests. Read more at thefreethoughtproject.com...

Our local police have a "See Something Say Something, Report all Suspicious Activity to Authorities!" sticker with a creepy eyeball on it.

Serve and protect, not the case. I have caught thieves in the act, got a tag number and the responding officer refused to do anything. In that same area, I have been arrested for 'pissing off the police' after they handcuffed me for 3 hours because I looked suspicious let them know they can't keep someone in cuffs for that long without making a arrest. They let me go, only to arrest me the next morning for disorderly intoxication. (the prosecutor dropped the charges, the Judge tried to coerce me into pleaing no contest at my arraignment).


There most certainly is. I know of a good guy, someone who has stayed out of trouble and a hunter who is quite familiar with guns. He went through the police academy and finished on the top of the class. He had several interviews with local PDs and did not get hired. He told me that they asked a bunch of psychological profiling questions. He now works at a major store in the collections department.

The guys I know who went on to become local police officers, either already knew a few people and that got them hired, or they got their start being a CI Narc and worked their way up.
edit on 15-11-2014 by jrod because: a