Does the Federal Government Do More Harm Than Good?

Admittedly, I have not fully thought this through, but I would suspect that everything except for currency and the common defense could be eliminated. You could argue that even those two functions of Federal Government could be eliminated with a little thought. I would also argue for complete and total nuclear disarmament. We simply can't afford nuclear war as a species.

Our Federal Goverment was never meant to have power over the individual states and think of all the crap and expense we could eliminate with the dissolution of Feds.

I would love to read the ideas of my fellow ATS members.

In Canada they do nothing for anyone but themselves...

Useless bunch of criminals who just steal from the public...

Harper just spent $121k to chat with a few big shots from other countries... guess who foots the bill?

They sit around and argue, and get absolutely nothing done... and get 6 figures to do it...

All governments are corrupt... They're all thieves...

They rob us blind, tax us to death... and for some reason we don't have a choice

I HEARTILY ACCEPT the motto, — "That government is best which governs least";(1) and I should like to see it acted up to more rapidly and systematically. Carried out, it finally amounts to this, which also I believe, — "That government is best which governs not at all"; and when men are prepared for it, that will be the kind of government which they will have. Government is at best but an expedient; but most governments are usually, and all governments are sometimes, inexpedient. The objections which have been brought against a standing army, and they are many and weighty, and deserve to prevail, may also at last be brought against a standing government. The standing army is only an arm of the standing government. The government itself, which is only the mode which the people have chosen to execute their will, is equally liable to be abused and perverted before the people can act through it.

From the opening paragraph of Civil Disobedience by Thoreau.

Sounds like you and him might find a few points in agreement (except I suspect that he would either spit or laugh at our fixation on the concept of "liberal/conservative" aligned politics. Especially as it stands today.

Well, and that you and he seem to disagree on the need for a standing army. In regards to that, I certainly am in the Thoreau camp. I think the oceans do a perfectly find job of providing for a common defense. For free. i.e., not costing us $800bil a year while our deficit grows and our infrastructure crumbles.

originally posted by: Metallicus
a reply to: bigfatfurrytexan


The following is my opinion as a member participating in this discussion.
I agree. And considering the fact that most people do not wish to war with one another that would likely not be a problem. It's the governments that quarrel within themselves. Not the people. I would hazard a guess that most countries would never lift a hand to another country if it were up to the general populace alone.

And yes... The government most certainly is doing more harm than good at this point IMO. I don't think there is a way to change it without dismantling the whole farce and starting over with something new. I think the swift his flipped over to far for it to be salvaged as it stands now.

As an ATS Staff Member, I will not moderate in threads such as this where I have participated as a member.
edit on 11/9/2014 by Kangaruex4Ewe because: (no reason given)

originally posted by: Metallicus
a reply to: Akragon

A few years ago the premier of Ontario spent a billion dollars for a gas plant...

this is what they ended up with... 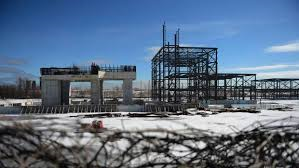 the premier just shrugged and stepped down... and the rest of the government shrugged... bitched, and forgot about it... Then we re-elected the party a few months later...

Anyone else would have went to jail for life... this guy basically walked with a few million dollars in his pocket and a snicker towards the Canadian public

The Canadian government is so corrupt its not even worth talking about...

So you think each state should govern itself with no federal government? Is that the idea?
edit on 10-11-2014 by tavi45 because: auto correct mistake

So you think each state should govern itself with no federal government? Is that the idea?

Yes. I would also be fine with the US breaking up into smaller republics.

I'll take my chances over being ruled by some politician in Washington.

Well without a federal government then states really become there own little countries with there own little dictators each with its own set of rules and without the feds to keep them bound to the constitution could really get out of hand. Hell in no time at all I think we would see little wars breaking out state against state over issues like water rights to rivers.

Dont get me wrong because I know the federal government has overstepped it bounds and does a ton of things horribly but some things it does better. Such as interstate roads, vaccination programs (did a good job against a lot of diseases like polio) and I do think we need a military just not one like we have now. I boost things such as coast guard and stop building giant super carriers which does lead to VA benefits like the GI bill. Consumer protection agency isn't bad either.

Here is a small list of things it got right. www.huppi.com... Some on that list I dissagree with but the majority I agree with.

I will mention this one as pertains to the alternative of individual states taking care of it.

The EPA (yes I know it does a lot wrong as well) Consider a scenario where states ran things the way they want and one state lets a company dump toxic sludge into a river that runs into another state I am sure that would cause quite a bit of conflict between the two don't you? Hell who is to say one state doesn't build its own Nukes they could without a federal entity.

Then there are those landlocked states just imagine if embargoes were placed on them or high tariffs sounds like recipe for conflict. In this age there would be no fly zones and the like as well.

As much as I dislike DC and over reach I don't think the country well it wouldn't be a country anymore but lets say the sovereign states without a DC would fare all that well for very long without it.

I think such a scenario would make us more like what you see in Africa lots of little countries and lots of animosity and conflict.
edit on 10-11-2014 by Grimpachi because: (no reason given)

I like your analogy and it could also be used to point out why we have no need for a Federal Government. Small countries settle their disputes all the time and usually without the need for violence. Also, these would not be dictatorships as the people would still be selecting their state officials. Each state supreme court could have their own interpretation of our Constitution allowing for more freedom and for regional values to be better represented.

I know this isn't perfect, but I still like the idea of less Government and would be willing to experience a bit of the unknown for more freedom and regional self determination.

I have never proposed anarchy only a return to state rights. I also never proposed "every man for himself". I am not sure from where you draw your conclusions. It appears that you post whatever you want to say and then attribute it to someone else.

The country is far too interconnected to rely on each state governing itseld and making independent deals with one another. If the federal government dissolved, it would be anarchy.

"I'll take my chances over being ruled by some politician in Washington."

Well I ask who would insure they remained as constitutional if they don't answer to anyone like a federal government? Historically speaking smaller countries see more conflict and considering the way the nation states are divided I could imagine quite a bit of conflict over resources and differences. Eventually I would foresee one nation state overtaking others eventually leading to several larger countries within the area known as the US.

I like you would like to see less government but I wouldn't want to see what would become of the US without the federal Govt.

Anyone for the Monroe Republic. LOL revolution humor. BTW that show got canceled no big loss but it had its interesting points.

I can't disagree with the potential risks you pointed out. I guess it is a matter of trusting in an unknown future over a the known evil of the present.

I guess I really don't understand why you wouldn't want to take care of yourself. I would rather rely on myself, my family and my local community over the Feds.

Thanks. I think we need to fix the government we have but don't ask me how even I see a revolution of sorts as inevitable one day in fact I think we are overdue.

The founding fathers just couldn't imagine what technology would bring along with corporate interests or I think they would have written something to keep them in line along with money and special interests out of politics. They laid a great foundation but there were a few cracks that the slime and mold made its way into and it is going to take some great minds and brave souls to fill them in to keep that out.