An explosion in space near the Cassiopeia constellation on Oct. 19th, 2014...

posted on Nov, 9 2014 @ 09:22 PM
link
Sunday night, 10-19-2014 / 8:22PM PST, near the Cassiopeia constellation I seen a 'blink'. A light, or ???, blink on then back off every 6 sec or so. In a different spot but in and around Cassiopeia. This blinking light covered quite an area mileage-wize in about 30 seconds and a total of 6 blinks. The 6th and last blink happens when the object is flying in between the star "Shedir" and the smaller star near it. This time when it blinks it sets off a massive explosion! From the point of origin shoots a fire burst that resembles a straw. Long, tubular with a width, length and tube-like appearance but made of fire. It looked like it was headed for, and did contact the smaller star I mentioned. In a way similar to lightning being attracted by a tree. It seemed like some kind of static discharge igniting a gas or chemical source on an unbelievable scale. Possibly millions of miles long... I got the coolest life... This was on the same date, and near the same time, the comet Siding Springs was to have a flyby of Mars. Did anyone else happen to see this or hear or read about this event?

posted on Nov, 9 2014 @ 09:27 PM
link
I don't know anything about it, but I'm glad you posted about it. It sounds pretty cool to say the least and you are lucky to have witnessed something like that.

I don't know what you saw, maybe a war in space with lazers, etc., but it could not have been millions if not billions of miles away.

Personally, I have no doubt but what secret wars are being conducted for the control of space. President Reagan set the tone with his "Space Defense Initiative," better know to the public as the US government's own "Star Wars."

It was then sold to the public as a massive, expensive joke. It was anything but. We were beginning to have the super vehicles at the time--not rocket powered--to move into space with ease. The US Space Force was created and organized from the existing services. The stated goals were clearly set out and explained with tons of non-relevant camouflage data in a large book commissioned by the US Congress. That book, Military Space Forces: The Next 50 Years explains how the US with superior forces was going to control all space within the orbit of the Moon.

I have no doubt that by this time they have succeeded and they defend and control that territory as key to the concepts of US precepts which are not necessarily by their nature malevolent by typical standards in a world of adversaries.
edit on 9-11-2014 by Aliensun because: enhance readibility

posted on Nov, 9 2014 @ 10:03 PM
link
While searching online for relative info, one interesting thing I found talked about how the constellation Cassiopeia was thought to have been created many years ago, from some kind of cosmic gas related explosion...

posted on Nov, 9 2014 @ 10:27 PM
link
Any kind of explosion in space far away would be visible for quite longer than one evening. So it must have been something alot closer imho.

I have seen similar things. Things that are definitely not satellite or iridium flares. Distant flashing/blinking lights that stay in the same general area without traversing much of the sky.
I have no idea what they could be. I've never chocked them up to being ufo's because they are merely far off blinking lights that stay in one spot, but I suppose they could be. Also the blinking is intermittent and not systematic with a pattern like planes, etc.


While searching online for relative info, one interesting thing I found talked about how the constellation Cassiopeia was thought to have been created many years ago, from some kind of cosmic gas related explosion...


The constellation Cassiopeia is a group of stars that are widely separated (with distances of between 54 and 631 light years from Earth) and not related to each other except from our point of view where they happen to make a nice W shape in the sky. They are of different stellar types which indicates a wide difference in ages.

posted on Nov, 10 2014 @ 12:38 AM
link
Thanks, Phage. I guess I misunderstood something I read before having to do with the Cassiopeia A Supernova explosion and the dispersion of iron gas and space dust... a reply to: Phage

What is an iridium burst?

posted on Nov, 10 2014 @ 01:15 AM
link
a reply to: gorsestar
I think she means Iridium flare. They can reach magnitudes of -8. Far brighter than the brightest star.

Yeah.
But really cool. You can amaze your friends when you know one is going to show up. Wave your hands magically and....flare!
www.heavens-above.com...

Iridium bursts or rather, flares, which you saw are reflections from satellites less than 300 miles away from you. They just happen to be above you.

What the original poster saw was most likely atmospheric phenomena which can be pretty spectacular at times. The other things like "ItCameFromOuterSpace" described are most certainly satellites.
edit on 10-11-2014 by JadeStar because: (no reason given)

Which is why I say it was something closer not located where it looked like in the sky. I as well like a good iridium flare, perhaps something else in orbit or atmospheric like another poster suggested.

Could just as easily been an aircraft at high altitude for example and it's seems possible embellishment of the story as well. 19-10-2014 the coolest thing you have seen and you report it now? 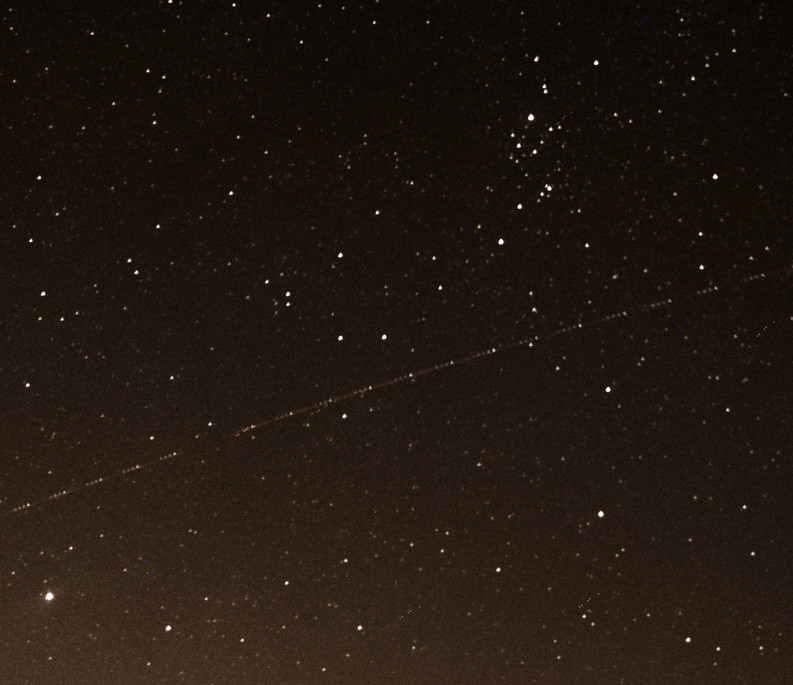 Happens all the time when taking widefield astrophotography shots, if you don't and up with a plane it's a meteor or iridium flare or ISS or a mix of any of those !

Blink of aircraft lights as it came into an airport about 35-40 miles from my location.

sets off a massive explosion


How big was the explosion? If you check out this link you can get an idea of how to describe measurements in the night sky.

posted on Nov, 10 2014 @ 05:21 PM
link
Well thanks to this thread I now know what iridium flares are and what's the main purpose of the satellites. And there I was expecting it to be a natural phenomenon turns out to be man made! Definitely going to keep my eyes open and play that trick on my threads
edit on 10-11-2014 by ThePeaceMaker because: Spelling