Where Is Dave Chappelle???

Where is Dave Chappelle? I know this is what's on your minds right now. Don't look away. But seriously.....

What happened to him? Was he possibly another MLK? 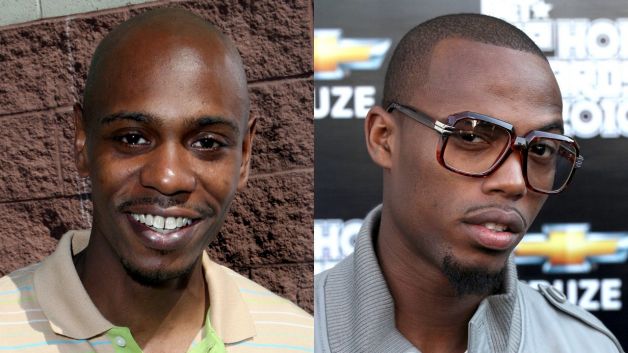 
Context or a bit more information would be helpful.?..

The ear to head ratio is different. But again, a little confused here, are you saying this is supposed to be the same person? I recognize the first photo obviously but there is no date or context of the photos to reference.

posted on Nov, 8 2014 @ 03:35 AM
link
He supposedly quit stand-up comedy. I saw his last show (according to him) and he said he was pursuing other avenues of entertainment. I loved his comedy. Hilarious. I wish he would do an HBO stand-up comedy show, as he was good at it. I have not seen him though since.

Well, just Googled him and apparently he is doing a tour.
Source

Well he disappeared. Had a successful show and up and "went crazy."

Plastic surgery might explain the difference between the two pictures I randomly found on the internet.
edit on 8-11-2014 by nukedog because: (no reason given)

Do you mean this exact moment (probably asleep) or in general? Where is he in his personal development or in space? Are you worried about him, or why he needs glasses? Didn't he have farm or house in central Ohio at one point, maybe he's asleep in there.

posted on Nov, 8 2014 @ 03:40 AM
link
I'm not sure your second image is actually of Dave Chappelle. Different lighting and angles can make huge differences in people's appearances. It could very well be Chappelle and could very well not be him (from the info we have so far). Like the member above it would be helpful if you would add more context. Where did the first pic come from? Where did the second pic come from? What time frame passed between the two photos?

Information like that would help. I do see a difference in the ears, and the nose but to me the second pic does not look like Dave Chappelle at all. I understand that is what you are saying, but we would need to know for a fact that this picture was claimed to be him by someone other than a stranger on the internet.

Are you inferring that he was disappeared for some nefarious reason and replaced with someone else?
edit on 11/8/2014 by Kangaruex4Ewe because: (no reason given)

"All that stuff about partying and taking crack is not true," he told TIME. "Why do I live on a farm in Ohio? To support my partying lifestyle?" Chappelle returned to his Ohio estate after several weeks in Africa, but he never went back to The Dave Chappelle Show — though he later promoted the documentary Dave Chappelle's Block Party in 2006. He has returned to stand-up sporadically and was even rumored to play Rick James — one of his most popular parodies on his show — in a biopic, though that eventually fell through. He's no Thomas Pynchon, but he was still the best recluse of 2005.

I hope this helps!

posted on Nov, 8 2014 @ 03:58 AM
link
His appearance has definitely changed without a doubt i saw him on a late show i think Letterman? There was a thread about it here anyway and he looked way different put alot of weight on and to me looked alot healthier, depending on who takes the photo or where it comes from and what editing is done etc they can majorly differ and make people look totally different between shots, he had taken a major change in appearance though but hasn't disappeared i really miss his show!!!!!

posted on Nov, 8 2014 @ 04:08 AM
link
What all of you fail to grasp is he was right on the cutting edge before Obama. He has disappeared from our collective consciousness right after he up and "went crazy and went to Africa," abandoning a million dollar show mid season.

Is it possible that he is a victim of a sophisticated ostracism?

That's not Dave Chappelle on the right.

It's a rapper known as B.oB

Cool. It's a hypothetical though. What happened to him???

Was he a victim of some sort of, (dare I say it,) right wing agenda?

He talked at one point about the intersection between art, and corporate interests and said prepare to have your hearts broken, I imagine to a group of students.

LMAO that other guy doesn't look a thing like Dave Chappelle. Who the hell is that? I thought it was DJ lance, but I've watched way too much Yo Gabba Gabba with my daughter.

Oh thank goodness... I thought I just wasn't seeing it. It looked nothing like Chappelle to me. I can sleep now without thinking my brains are melting.


Where is Dave Chappelle?

I found these two pictures on the internet to back up my point. I hope your brains are ok.

Nobody has offered a reasonable explanation for his sudden "change of direction."

This man was borderline unifying. Right before we got our thrill in the pants hope and change

posted on Nov, 8 2014 @ 04:52 AM
link
I believe there are fairly in depth doco's on the topic, just take a look on YouTube and you should find something. If I remember correctly, the main reason he stopped doing so much show business was because he simply didn't like the popularity, but it does go a bit deeper than that if you have the time to research this topic.

So are you saying he was cloned ??