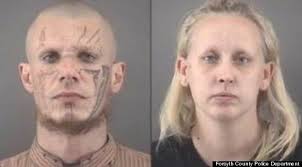 This guys is a freaking whacko.

According to a friend of Burch, Algarad claimed to get a high from eating the “still-beating heart” of a sacrificial animal and bragged openly about having killed two prostitutes. Last month a front-end loader scooped up tires, lawn mowers and other debris from the couple’s yard. Burch’s friend spoke about conditions inside the house that were so bad she thought she might vomit. Devil-worshiper or no, who in their right mind (a long stretch with this Pazuzu cat) would want to live in a filthy hovel loaded with feces and dead animals.

“He was on all kinds of drugs and drink when I got there,” she said. “I’m pretty sure I witnessed him peeing in the corner.” The friend said Algarad’s behavior was “very sexual, very provocative.”

As oon as I seen this dude naked and pissing in the corner I would have thrown deuces and peaced the f### out. Seriously. I don't know wtf to think about this guy. He has some serious mental issues going on. Well... at least he wasn't eating anyone... as far as we know...

These are the type of cases that I have no problem seeing them receive the death penalty. Torture or kill someone, you deserve to lose your own life. Taxpayers money shouldn't be going to keep these sicko's alive. They want to kill for satin, let them meet him and enjoy his company.

As much as I agree that would be downright foolhardy for the police. There is probably a lot of evidence in that S###hole.

posted on Nov, 7 2014 @ 03:49 PM
link
Disgusting. I can't help but notice how similar this guy looks to his "wife". Around the eyes and such. It looks like they could be brother and sister.

Cleanliness must be next to Godliness....

They want to kill for satin.

But yeah, I agree. In this case it is abundantly clear that this guy is a complete and utter nut job. Our society is probably better without the likes of him and his "wife"... Creepers to the max.

I don't even want to dwell on the possible implications of that...

posted on Nov, 7 2014 @ 04:04 PM
link
Holy spider webs! The infestation they must of had....
I agree I don't see how you could save that house, that needs to be torn down and the lot not used for a while.
I would also agree with the death penalty here, and that isn't to common for me

My crappy internet wouldn't allow me to see the rest of the pics. Stupid internet!

What I could see was still pretty gross.
What is wrong with people?

If I ever was in a house where someone walked to the corner and pissed, I'd be outie!

I once saw a grown man poop on a puppy pad in the middle of room full of people at a party. It scarred me for life.

That the fellow is bat crap crazy is fairly evident, but you can be crazier than a box of locusts, and NOT be obsessed with odd rituals and devil worship. What I want to know, is where his addled mind got the idea to go down the ideological route, rather than the just plain old dysfunctional route.

posted on Nov, 7 2014 @ 04:23 PM
link
All that crap and pee and smelly, dirty walls and religious stuff is simple cover for he's just a killer. So is the government. But we're going to hang this guy. Okaaay…

A sign posted on the front door of the house warned police officers not to enter. “No gang members allowed: anyone that dresses the same, has the same badge and call themselves the authority of the land they did not create.”

Not defending him either so save it.

At any rate, we can do something about this guy, right now, just because we can't take down the entire governmental power structure doesn't mean we can't get this guy off the streets now. Your point is lacking in validity I fear. I do agree with your underlying sentiment, however.

Yeah, that was my impulse, too. Cleanse that bad boy with fire. I feel really bad for the officers actually walking in that place because for as bad as it looks, I do not even want to imagine what that place must've smelled like.

Total insanity in that place.

I know some women who would kill for satin sheets.

I once saw a grown man poop on a puppy pad in the middle of room full of people at a party.

Yeah it's pretty freaking disgusting. I can't imagin living in a house like that. I mean, I used to be a punk rocker and we had s### written on the walls all the time and on everything. But we didn't live in filth and squalor. We cleaned up after ourselves, for the most part, I'm not saying the place was immaculate but it wasn't a dump either.

God Forbid what they find in the walls, attic, and foundation of that place!

Hum there was a recent thread where nearly everyone ascertained so called Satan Worshipers don't kill people and make sacrifices...clearly they were mistaken.

Or this is just one crazy guy that just liked the evil version of satan?
Maybe we shouldn't use one person to paint the picture of others

This kind of smacks the Lucifer Light Bringer concept in the face.