Luxembourg Leaks: Tricks of the Trade

Pepsi, IKEA, FedEx and 340 other international companies have secured secret deals from Luxembourg, allowing many of them to slash their global tax bills while maintaining little presence in the tiny Central European duchy, leaked documents show. These companies appear to have channeled hundreds of billions of dollars through Luxembourg and saved billions of dollars in taxes, according to a review of nearly 28,000 pages of confidential documents conducted by the International Consortium of Investigative Journalists and a team of more than 80 journalists from 26 countries. Big companies can book big tax savings by creating complicated accounting and legal structures that move profits to low-tax Luxembourg from higher-tax countries where they’re headquartered or do lots of business. In some instances, the leaked records indicate, companies have enjoyed effective tax rates of less than 1 percent on the profits they’ve shuffled into Luxembourg.

Luxemburg has consistently had one of the highest standard of living in the Eurozone. 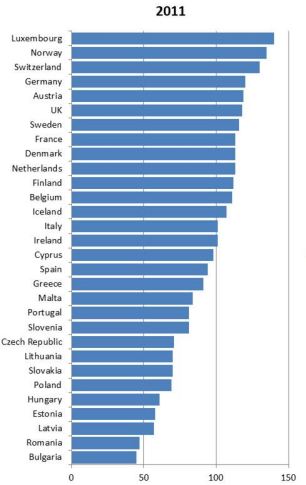 And I happened personally to work as a contractor in an Investment Bank on the Kirchberg hill in Luxembourg city. Plus, I'm from a neighbouring country. So feel free to ask more details if you want.

posted on Nov, 6 2014 @ 07:34 AM
link
Not really a shocking piece of news this - it's been discussed in the UK News and Parliament for a few years with regards to such firms as Starbucks and Amazon. I believe they have started to address this issue, as it could be against EU law as doing secret deals with firms to cut tax bills is tantamount to State Aid, which is strictly controlled in the EU (or supposed to be - not if your French or German though).

I believe they have now changed the Law in the UK (and possibly EU wide) so that firms have to pay the VAT (Sales Tax) on earnings in the state at which the sale was made, rather than before where they'd Gandalf the money around until it was untaxable. But there is still some way to go to sort this nonsense out.

It's almost from 1 year ago but my guess is that this article is still relevant today :

Britain rules the world of tax havens, Queen is warned

The Dutchs go to Belgium to drop their savings, the Belgians go to Luxembourg. The grass is always greener on the other side if you are after tax reduction. I don't know where the Americans are the most likely to end but even within the US, the situation of a state like Delaware is ambiguous.
There needs to be an end at the overall hypocrisy surrounding some rogue tax-heavens nations.

posted on Nov, 6 2014 @ 08:01 AM
link
If you look at the cost of importing food into the EU, 90% of the retail price comes from the Luxembourg middle-men who handle all the import and distribution paperwork as well as speculate on the commodity market prices. Only a small fraction goes to the actual farmer. They have made an entire industry based on international trade, which is paid for by the consumers.

Quite - although as many are Crown Dependencies and not actually part of the UK, there is only so much the UK can do (which is not much) about getting them to reform their Tax Laws and for a good many, it is a principle source of income to their coffers, so they are naturally resistant to any change.

posted on Nov, 6 2014 @ 08:47 AM
link
The more learn, the worse it seems to get, just what are going to do with all that money? does it trickle into a parallel universe?

posted on Nov, 6 2014 @ 02:08 PM
link
Interesting site (part of it in german) where the documents are publicly disclosed :
Süddeutsche

Surprisingly some company names are still witheld up to the 10th November.

originally posted by: WilsonWilson
I used to love living in luxembourg the standard of living was great. I worked in a bar and took a £4000 pay cut when i came home to the UK to work for a bank.

A british-style pub near the train station of Luxembourg ?

Senior Associate in Employment Law Gilles Dall'Agnol has keenly observed the reactions of companies to the two reports, which revealed tax agreements with international companies made by big four companies in Luxembourg.

“I think that LuxLeaks, for all its negative consequences, has had the effect of increasing awareness about the topic of data security,” he said.

As a result of the scandal, he says he expects to see the role of information security officers strengthened, along with the introduction of specific policies and mechanisms, such as whistleblowing structures. Meanwhile, he says companies will be more reluctant to outsource data security responsibilities.

However, Catherine Di Lorenzo, Allen & Overy Senior Associate in IP/IT and data protection law, said that many companies are failing to address a key question when securing tangible evidence of a data breach: are they authorised to monitor or screen employees' emails?

“With respect to such screening, probably the most important part you have to know is that screening qualifies as employee monitoring which is only permissible if certain data protection rules have been complied with,” Ms Di Lorenzo explained, adding: “The data protection steps cannot be retroactively applied, which means if you've a suspicion to do with an email in which client data might have been sent, as you did not comply with data protection rules, the employer cannot simply go and screen the employee's account.”

A company carrying out monitoring while having failed to comply with these rules exposes itself and its managers to criminal liability. In addition, evidence collected in this way is likely to be considered inadmissible in court.

This means, in other words, that a dismissal of an employee based solely on evidence collected in this way is likely to be ruled as abusive.

“If a company has not complied with the data protection rules, it should not even be carrying out a screening as this would itself qualify as a criminal offence. If the company does the screening anyway and finds something, it will most likely not be able to use it.

"It's a disaster if you find yourself in such a situation,” Ms Di Lorenzo said, adding: “Compliance with data protection rules costs just one or two days' work. But it is simply an element of corporate housekeeping everybody has neglected for a long time.”

Mr Dall'Agnol adds that in many such cases, companies do not have another choice but to make a criminal complaint without carrying out screening or employment law sanctions and leave it to the prosecutor to find the evidence.

So the morale of this 'incident': keep-on tax fraud as long as you protect your sensitive datas ...

This was somehow a very 'christian' move from the lux authorities : proactive disclosure of their own practices (confession) in order to raise some awareness (redemption). Some will never understand ...

edit on 6-2-2015 by theultimatebelgianjoke because: filled out

The European Commission intensified efforts to fight rampant tax avoidance by multinationals on Wednesday (18 March), in its first major effort to counter the LuxLeaks scandal that embarrassed President Jean-Claude Juncker just days after he took office.

The EU executive said its ambitious plan would force the EU's 28 countries to share details of any tax deals agreed with some of the world's biggest multinationals, ending the secrecy that allowed member states to often compete against each other to attract business and investment.

"Tolerance has reached rock-bottom for companies that avoid paying their fair share of taxes, and for the regimes that enable them to do this," said EU Economics Affairs Commissioner Pierre Moscovici, as he announced the plan.

"We have to rebuild the link between where companies really make their profits and where they are taxed," he said.

The plan targets so-called tax rulings, secret deals at the heart of the LuxLeaks scandal which revealed last year that some of the world's biggest companies -- including Pepsi and Ikea -- had lowered their tax rates to as little as one percent in secret pacts with tax authorities in Luxembourg.

The revelations, unearthed by a consortium of investigative journalists, were an especially huge embarrassment to Juncker, the then-newly installed Commission head who presided over the tax pacts for almost 19 years as Luxembourg prime minister.

“The next must be the maximum possible transparency among economic players themselves and consumers. The ultimate objective is justice, tax fairness among states and companies".

Under the new regime proposed by the Commission, member states would be forced to reveal tax rulings made with companies to other bloc members automatically every three months.

This transparency, Moscovici said, would deny companies the ability to secretly shift profits and avoid taxes, at least within the EU.

The plan, however, did not question the perfectly legal practice of offering companies tax rulings, Moscovici said, this being the strict responsibility of member states.

Critics said the plan was too narrow in scope, and the transparency too limited, to truly address corporate tax avoidance they said occurs on a massive scale.

"Though this tax transparency package is supposed to be a response to the Luxembourg Leaks, it's only addressing a fraction of the problem," said Koen Roovers of the Financial Transparency Coalition in Brussels.

"Over 150 companies in the leak were associated with the United States, but they will simply be out of bounds under this proposal," he said.

Activists also criticised the fact that the tax ruling would remain out of the public eye, remaining privileged information for tax authorities.

"This is not tax transparency or tax justice. The veil of secrecy remains in place," said Tove Maria Ryding, of the European Network on Debt and Development.


The revelations, unearthed by a consortium of investigative journalists, were an especially huge embarrassment to Juncker, the then-newly installed Commission head who presided over the tax pacts for almost 19 years as Luxembourg prime minister.

A embarrassment? No, wait, a "huge" embarrassment. In my world, embarrassing is like wearing mismatched socks. For someone in charge for nineteen years, I'd say it's much more than that. Nice understatement by the source there.

It just burns me. If I fleeced someone for a measly dollar I'd probably have felony charges brought against me at the very least yet this guy screws millions of people and nothing happens except he's a little embarrassed.