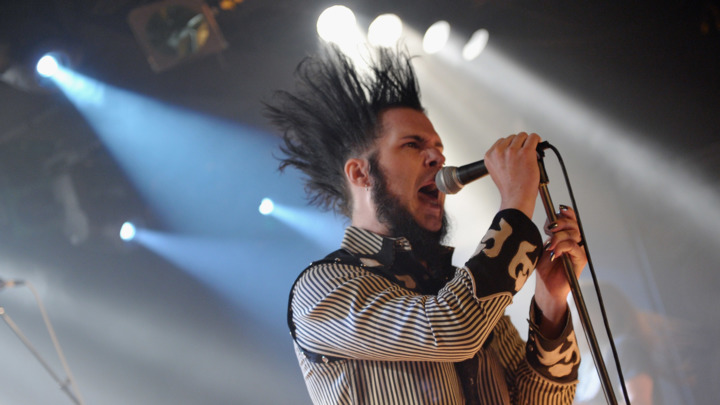 Wayne Static, the singer of the California metal act Static-X, died November 1st. "Platinum selling musician Wayne Richard Wells, better known as Wayne Static, passed away at the age of 48," Static-X's Facebook page told fans on Saturday night. "Wayne Static was the enigmatic former frontman and namesake of Static-X, who later forged a successful solo career. Wayne was scheduled to co-headline tours with Powerman 5000 and Drowning Pool over the next several months. No additional information is available at this time." The rocker's publicist also confirmed Static's death to Blabbermouth.

This sucks. I remember the first time I heard "I'm With Stupid" I freaked out. Static-X was one of my favorite bands for years.

While Static's cause of death wasn't revealed, tweets from his musician friends and peers suggest that a drug overdose was to blame. "RIP Wayne. This is so sad. Too many musicians are dying from overdoses," Papa Roach's Jacoby Shaddix wrote on Instagram. "I'm serious, addiction is real and takes fools out. No one is invincible. So glad I live a sober life today. The number of friends that I have lost to addiction is crazy… I know drugs and partying are part of the 'rock 'n' roll lifestyle,' but damn, how many more gotta die??? # the lifestyle, I want life!!!! See you on the other side, Wayne."

So it looks like Wayne OD'd on something. Either way, Stati-X helped define who I was as a teen and a young adult. I will be blaring Static all day.

First Static song I ever heard

RIP Wayne Static, your hair shall live on for eternity.

Another great lost to substance abuse.

posted on Nov, 2 2014 @ 02:23 PM
link
RIP. These songs brings back memories.
As a big fan of Coldwave, appreciate the band's more mainstream slant of it sharing to people who otherwise wouldn't have found it.

Wayne Static on backing vocals- Skinny Puppy's "Use Less"
edit on 2-11-2014 by dreamingawake because: (no reason given)

posted on Nov, 2 2014 @ 04:58 PM
link
Bummer. Static was a very influential band if a tad later than say Korn. Drugs take their toll but there wouldn't have been rock and roll as we know it without them. They feed on each other, it's a little creepy if you think about it.

First time I heard his music was in a "Crusty Demons of Dirt" (freestyle motorcross) video. He had quite a voice, I'm sure he lived a hard fast life. Sad to hear the News. I always liked this one.

posted on Nov, 2 2014 @ 07:13 PM
link
But but but. I thought he's been clean for a while. This has to be a joke! I was planning on finally seeing him play in concert now that I am financially stable.

I remember the first time I heard Bled for Days on the radio. The next chance I got, I bought Wisconsin Death Trip and listened to it exclusively for months. That album was a huge influence to me and I still crank it every time I hear something off it!