I don't practice any pagan religion, but have always been somewhat drawn to the beliefs. I also think that knowing the true history of Halloween is something many disregard. I would be fine with my children learning the roots of Halloween in class, but the school can't do that.... no, have to be politically correct (or what the principal deems "correct")..... I know that what I grew up with as Halloween is not what it was historically, but it created in me a desire to know where it all stemmed from.

I actually wrote a long rant about how my children's school was morphing Halloween (and all celebrations, except for "state" holidays) into something I don't much like. But, like usually happens, it was lost in the loading process.

Anyway, I just wanted to ramble about my love for this ancient celebration.

Even though I live in the Bible Belt Halloween is still a big celebration here. Even the churches participate in "Spirit Fests" and the like!

There's been no obvious pressure in our school system to succumb to the political correctness overlords.

I love Halloween. I'm dressed in costume today at work. Your right about it being changed. It's depressing. But no matter how old I get, I'm keeping up tradition.
And I keep up the other traditions, at home, later tonight.
edit on 31-10-2014 by chiefsmom because: wrong sign

In the Bible belt as well.... and boy, my kid's principal is pissing me off big time! The kids were allowed to dress up today, but only in "career oriented" costumes! I had to go all over town, over multiple days, to find a lab coat for my 3rd grader (she wants to be a chemist). I never found a lab coat, but found something close enough.

We no longer have Christmas parties (or Christmas break), it's all "winter parties"...... Both of my kids were sent home with notes saying there will be no Halloween parties, but could we send in candy and treats? After speaking with my kindergartner's teacher, I was informed that the teachers have to be sneaky and "work parties into" the curriculum.

I would be ok with the changes if it were because parents asked for it, but this is just at my kid's school.... just the principal. Political correct BS!

Oh, there I went, got my rant in that I lost earlier!

I got me a costume.... found an awesome top at Goodwill, and it is perfect for a Studio 54 themed outfit. I haven't decided if I am going to wear it yet. Kinda depends on how cold it is tonight (calling for snow flurries).

posted on Oct, 31 2014 @ 11:17 AM
link
Halloween garnishes more attention nowadays because its "scary". Who wants to be all warm and fuzzy holidays when you can be frightened out of your wits?

I actually don't care for the scary aspect of it that is so popular now. I like low key Halloween movies- just showed Hocus Pocus to my church youth group the other night.

For my, it's the historical and (if you are inclined to believe in it) the mystical feel that I enjoy. I look forward to my children being old enough to enjoy that part too.... for now, they get frightened and I don't get into Samhain. Later though, they will understand where this "trick or treat" comes from.

For my, it's the historical and (if you are inclined to believe in it) the mystical feel that I enjoy.


I don't had a link but as I understand it, the historical aspect is scary. Someone correct me but "Trick or Treat" meant do a good trick for us when we come to your door or we will take a treat (one of your children).

Hopefully I am misled by some TV show about this.

Everything except my accessories, came from mine, or hubbies closet! Very little money involved, but have made people laugh everywhere.

Which brings me to a sad point. Getting gas this morning, and just now going out for lunch, I have not seen ANYONE except my co-workers dressed up!
What is wrong with people? When I was younger, it seemed more people did, even cashiers at the grocery store.

I love the scary aspect of Halloween, just old school, not so much the blood and gore that has become popular. But this year I went with funny.

@intrptr: I thought the OP meant more of the "All Hallows Eve" or Samhain history as oppose to the Trick or Treat part. I could be wrong.

I had to go to my school (returning college student) and there were tons of people dressed up! My 3 year old went with me, dressed as a fairy!

You are correct, I was referring to the Samhain traditions. I'm all for hitting up a cemetery on all Hallows Eve, but it is the blood and gore I shy away from. Just not my cup of tea.

You know, I'm not familiar with this idea, but I will be looking into it!

I love Halloween too! The smell of pumpkins lofting through the house as you carve them with your loved ones. Kids running around in their costumes, super excited to dig in to their stash of candy later. The spooky way the fog drifts over the hills, the color on the trees, the smell of fireplaces. Love everything about it!

posted on Oct, 31 2014 @ 01:00 PM
link
Me too, Autumn and winter are my favorite seasons, the atmosphere of Halloween is great, I love anything dark and creepy, should be Halloween all year

For my, it's the historical and (if you are inclined to believe in it) the mystical feel that I enjoy.


I don't had a link but as I understand it, the historical aspect is scary. Someone correct me but "Trick or Treat" meant do a good trick for us when we come to your door or we will take a treat (one of your children).

Hopefully I am misled by some TV show about this.


Sort of. The way I understand the history, it's to deter spirits from doing harm of some kind to you & yours. I'm not entirely convinced people back in the day really believed in it to the extent we today think they did, it could have been more along the lines of just a community tradition thing with a spooky story to it.

posted on Oct, 31 2014 @ 01:31 PM
link
I had to have my werewolf teeth pulled about seven years ago. A toothless werewolf is not scarey. I'm depressed, now I just look like Odin with a trimmed beard. en.wikipedia.org...

Every Halloween I whip out old Bessy here.
[atsimg]http://files.abovetopsecret.com/images/member/bcca3bd970d7.jpg[/atsimg]

Trick or Treat my left foot! They're after my booze!

I catch the little buggers out in the open coming across the lawn. They can't maneuver much being all weighted down with candies. They drop like flies. Next day I have all the candy, plastic pumpkin buckets and wigs I can handle and then some...

I would think yours would be the best house to hit up.... Even having to pay a candy toll, that would have been the highlight of my route!

posted on Oct, 31 2014 @ 08:49 PM
link
It was a crappy day for Halloween that's for sure. Though it's around 40 degrees out, there has been a light snow since morning. Then just when dusk came on, some sleet and high winds. Hardly anyone trick or treating at all. There was not even a sufficient random sampling to initiate a single deviate, as the bowl was never emptied after a single hit.

I switched on the jaw box today while tending to the candy bowl.

Get this. In Chicago, they showed some barge that was near capsized, moored along the shores of the lake. Listing bad in huge waves that are crashing over Lake Shore Drive, along the entire lakeshore. It was an intended Halloween attraction that was supposed to have been filled with kids. But high winds came in (60 mph) just before school let out, and the barge was empty of human cargo. I caught just the tail end of the story but it was obvious that the 'barge' was naught but a potential death trap from the start.

Kids, on an inflatable barge, in the dark, racing around, collecting and eating candy, on one of the Great Lakes, in November, with no life jackets. 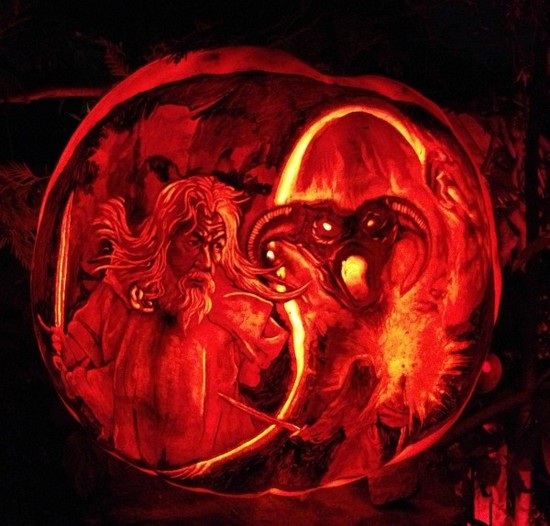