JERUSALEM — The Israeli authorities closed off all access to a contested holy site in the Old City here on Thursday for the first time in years, a step that a Palestinian spokesman denounced as amounting to “a declaration of war.”

The action came after Israeli forces shot and killed a Palestinian man who was suspected of involvement in an attempt on Wednesday to assassinate a leading agitator for more Jewish access to the site, which Jews call the Temple Mount and Muslims call the Noble Sanctuary. The closure prevented Muslims from worshiping at Al Aksa mosque, one of the three holiest sites in Islam.

The site has been the scene of increasingly fierce clashes between Muslim worshipers and protesters and the Israeli police in recent weeks. Mr. Abbas has accused Israel of trying to change the status quo at the site to allow open Jewish prayer there, something Israeli and Palestinian analysts alike have warned could set off a major conflagration.

Officially claim they closed one of the most holy sites in the world to prevent an act of terrorism... But is something more going on?
Jews call it the Temple Mount and Muslims call it the Noble Sanctuary. Muslims worship at the Al Aksa mosque, third-holiest site in Islam. AKA gold-domed shrine, the Dome of the Rock. 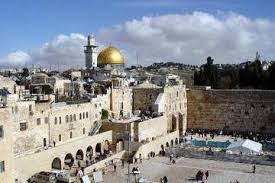 For decades Jews have not been allowed worship atop the mount, only at the Western Wall, a remnant of the retaining wall around the ancient Second Temple. 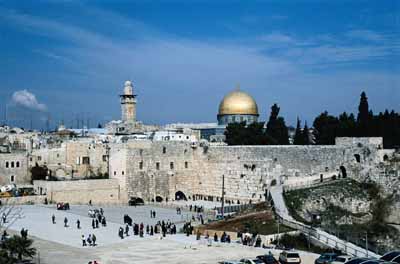 Now that takes us to the man targeted for this would be shooter.

Mr. Glick is a prominent Israeli-American activist who has frequently been arrested at the Temple Mount. Mr. Glick leads a Ultranationalist Jewish activists and other groups who over the past few years campaigned for Jewish prayer rights on the mount. and despite the prohibition, more than 8,500 Jews visited the mount last year. setting off the Islamic Waqf who are responsible for keeping order there at Al Aksa and they are not happy. Over the last few weeks there have been a number of clashes between the two groups over who has the right to worship where...and it all came to a head on Wednesday.

Mr. Glick was shot and seriously wounded on Wednesday night as he left the Menachem Begin Heritage Center. The Times is reporting he was shot 4 times, chest, neck, stomach and arm and is in stable but serious condition. Mu’atez Hijazi the shooter was killed.

posted on Oct, 30 2014 @ 11:37 AM
link
I thought about making a thread on this a few hours ago, but I figured by the time I posted it there would be half a dozen others.
From what I gathered, Israel had already banned anyone under 50 from the area in and around the Haram al-Sharif in order to "put pressure" on Palestinians to keep their kids from throwing rocks at "settlers" in the area.

The next few months should be interesting.

buster2010
+8 more
posted on Oct, 30 2014 @ 11:45 AM
link
Israel has no rights banning anyone from this site. Israel's occupation in Jerusalem is illegal and the Palestinians should tell them to get the hell out and if they keep coming arrest everyone for trespassing better yet don't charge them with anything just throw them into prison like Israel does. Palestine allowed Jews to come there and pray to the wall even though by law they didn't have to but that wasn't good enough for some people like that terrorist wannabe who was shot. As a notice to the American government please strip this nutcase of his American citizenship people like him degrades Americas image abroad.


Because of the sensitivity of the Temple Mount, Israelis enforce strict security measures for Jews and Muslims alike. For instance, during Friday prayers, any Muslim under the age of 45 is prohibited from ascending the mount; a rule put in place in response to young demonstrators throwing stones at Jewish worshipers at the Western Wall. Additionally, no Jewish groups can pray in the plazas surrounding the mosques or provoke the Muslims.

that website has a list of some of the more recent clashes
Three police officers were injured after the Temple Mount opened to non-Muslim visitors on Wednesday October 8.

On Friday October 17 2014 Palestinian Authority President Mahmoud Abbas gave a speech in which he stated that "we have to prevent the settlers from entering the Temple Mount by any means. It is our mosque and they have no right to enter and desecrate it".

there they call Mr. Glick


Yehuda Glick, a prominent Rabbi who worked day and night to restore Jewish rights to visit the Temple Mount

Look, every country has their nut jobs and visitors who are not respectful of another cultures differences.
Living where I do...SW Colorado... home to Mesa Verde and both the Ute and Navaho Nations every summer we are inundated with tourists...

For us Native Americans we are our more than happy to have visitors attend our ceremonies all we ask is that no photographs are taken during some of those rites... I can not began tell you how many cell phones and camera get confiscated by the tribal police...

now it's been a few years since we last had someone show up on the Rez and demand we raise up to overthrow our White Oppressors... that happens too and usually they are firmly escorted off tribal lands.

No sir, what's going over there now has nothing to do with Mr. Glick being an Israeli-American... It has everything to do with who will take control of Temple Mount and the Al Aksa mosque...
edit on 30-10-2014 by HardCorps because: (no reason given)

Interesting. I saw 50 but now I'll have to track down where. Thanks for the clarification. 50,45 whatever...either way it's just asking for more trouble. As if speeding up "squatters" wasn't doing enough to provoke the Palestinians. The pressure is on Israel. Jordan called on the U.N. for an emergency meeting of the security council about these illegal settlements...I wonder how that turned out?

originally posted by: HardCorps
a reply to: buster2010

Look, every country has their nut jobs and visitors who are not respectful of another cultures differences.
Living where I do...SW Colorado... home to Mesa Verde and both the Ute and Navaho Nations every summer we are inundated with tourists...

For us Native Americans we are our more than happy to have visitors attend our ceremonies all we ask is that no photographs are taken during some of those rites... I can not began tell you how many cell phones and camera get confiscated by the tribal police...

now it's been a few years since we last had someone show up on the Rez and demand we raise up to overthrow our White Oppressors... that happens too and usually they are firmly escorted off tribal lands.

No sir, what's going over there now has nothing to do with Mr. Glick being an Israeli-American... It has everything to do with who will take control of Temple Mount and the Al Aksa mosque...


How many people show up to the rez claiming that land belongs to them? How many of them show up and say you can't go there or your youth isn't allowed there?

If you were to do a little checking on Glick you would find out that he has started several riots and he should be in prison. The only reason his American citizenship was mentioned in the article is to get sympathy from Americans who think that our citizens can go abroad do whatever they want and get away with it. Palestine has control of the Al Aksa mosque Israel has absolutely no rights when it comes to that area.

you should do a little reading up on just how much land has been stolen from we 'Red Skins'...

it would give your rant a bit more credibility.

and again I reiterate...this has nothing to do with nations... and where people are from... this is just another case of two religions squiring off to pick a fight... Both sides worship the same god so you'd think they could figure out a way to share...Naw, it's easier to just kill those who don't look, think and act like we do, right?

posted on Oct, 30 2014 @ 12:23 PM
link
Israel just recalled their ambassador to Sweden after they recognized Palestine as a state earlier. As I said earlier, we're just getting started folks...

Well you can't say the Obama admin is in bed with Israel..
An article in the Atlantic paper earlier this week quoted Obama administration officials calling Israeli Prime Minister Benjamin Netanyahu a “chickens**t” and “coward” who is engaged in political posturing instead of making efforts to normalize the situation in the region. In a private conversation with The Atlantic’s Jeffrey Goldberg, on condition of anonymity, the US official called Netanyhu “myopic”, “pompous”, “reactionary” and “obtuse”, as well as blaming him for the “lack of political will” and “selfishness.”


MK Motti Yogev (Jewish Home) said, "The attempted murder in the heart of Jerusalem, the capital of Israel, of Yehuda Glick, a human rights activist on the Temple Mount, is shocking. This requires a ‘Defensive Shield’ style operation in Jerusalem to arrest all the leaders of terrorist organizations.”

I expect an emergency meeting of the security council to be announced any minute now. With Jerusalem involved, this could get ugly fast. Uglier than it already is. What blood moon are we on? Moons and goochers aside, someone needs to break up the argument before any more blood is shed.

If Israel doesn't know how to comply with others peoples/nations opinion/view/position over this land dispute, it should very well pump the momentum and start recalling ambassadors from all Europe. IMO.


After the shooting of Temple Mount activist Yehuda Glick Wednesday night, police closed off the Temple Mount to both Jews and Arabs, for fear that mounting tensions between both sides would erupt into a full-fledged riot.

But witnesses Thursday said that the ban had apparently been partially lifted: Arab Muslims were observed on the Mount, but Jews are not being allowed to ascend.

MK Zvulun Kalfa (Jewish Home), a member of the Knesset's special committee on Temple Mount matters, said that “closing the Temple Mount to Jews, while allowing rioting Arabs to traipse freely on the holy site, shows our weakness and our willingness to surrender sovereignty. This is the appropriate time to increase our presence and sovereignty there.

It reminds me of when my daughters start to argue over a toy...

Enough...Israel... Palestine... Go To your rooms and I while your there I want you to think about what you've done! 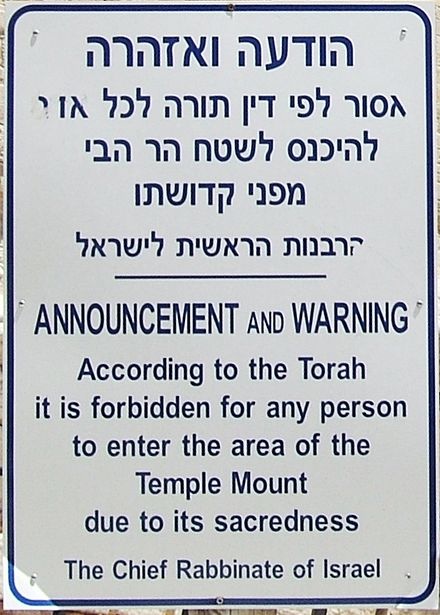 And what does that mean ?

That means insanity is ripe and in season on this earth...as per usual.

"Al Aksa mosque, third-holiest site in Islam. AKA gold-domed shrine, the Dome of the Rock." 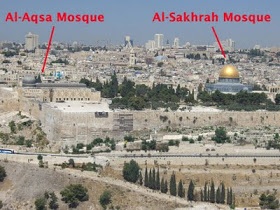 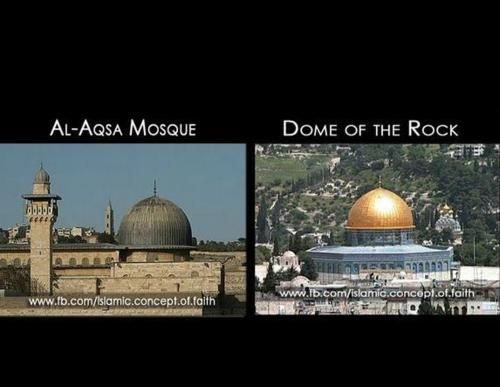 posted on Oct, 30 2014 @ 01:59 PM
link
Is this the mosque that fundamentalist Christians want to destroy to JumpStart the apocalypse?