Radiation Poisoning? Have a Beer!

posted on Oct, 27 2014 @ 03:25 PM
link
If you've been in need of a scientifically grounded reason for imbibing, here's one straight from a DOE handbook's recommendations! 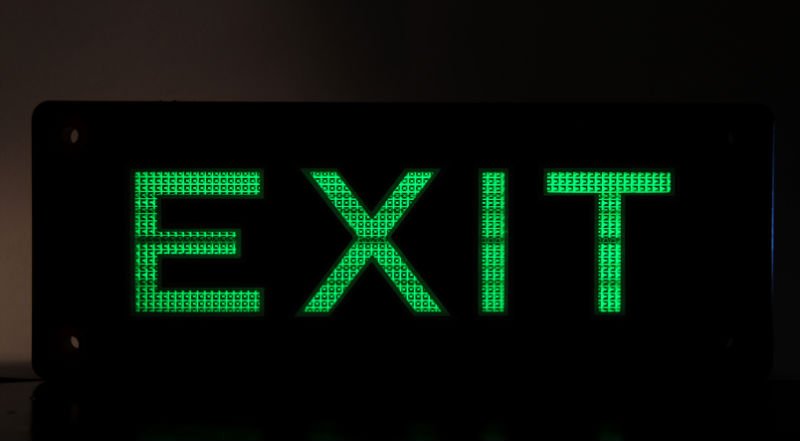 First a little background. Tritium is a radioactive isotope of hydrogen that naturally occurs on Earth in only trace quantities. It was first produced by Ernest Rutherford in 1934 and these days, it's made in nuclear reactors. Most people have likely seen a commercial application of tritium where it's used as the low energy beta-emitter (source of beta rays) behind the oh-so-cool green glow of radioluminescent glow-in-the-dark watch faces/hands, gun sites and self-illuminating exit signs like the one pictured above. Tritium-based radioluminescent applications should not be confused with the more common phosphorescent ones that are not radioactive and require "charging" with a light source. It also has uses as a booster for fission weapons, in controlling fusion reactions in nuclear reactors and as a radiolabel or tracer in various scientific experiments.

How bad are beta rays? The thing to remember about beta rays is that they have vastly less penetrating power than gamma rays and so typically, low energy beta-emitters like tritium produce particles that can't even penetrate the outermost layer of dead skin cells. Where beta radiation becomes a problem is when a beta-emitter finds its way into the body where it can emit particles that strike molecules like DNA, causing mutations (and not awesome ones that give you super powers) that could in a worst case scenario cause cancer. This is what happened to the Radium Girls who ingested radium-based paints while working at the United States Radium factory in New Jersey. Fun fact: radium was replaced with promethium-147 in the 60's but the luminosity degrades quickly which is why tritium came into favor.

Tritium sometimes finds its way into the environment in levels that are concerning. It's been discovered leaking into the ground from improperly disposed of self-illuminating exit signs for instance and in high levels in the contaminated water from the Fukushima Daiichi disaster. Tritium is particularly insidious (or useful if you're doing certain research) because it can readily replace the run-of-the-mill hydrogen atoms in water to form tritiated water also known as super-heavy water.

This is where the beer comes in. From iO9:

Once in the body, it gets incorporated into "body water," which is just what it sounds like. The fluid that sloshes around every part of our body is suddenly contaminated with tritium.

Fortunately, scientists have found a great way to reduce tritium exposure. Increase the "turnover" of water in the body. One simple way of doing this is upping liquid consumption. If the consumed liquid has the effect of flushing out the liquid already present in the body, so much the better. This is why standard practice for scientists at Los Alamos who worked with tritium was to head off to a bar and get drinking. Beer is a diuretic, taking liquid out of the system. A few beers can up the body's turnover rate and flush out the tritium.

To be fair, other diuretics will also work as is pointed out by the DOE on p. 19 of Primer on Tritium Safe Handling Practices (PDF) under the heading "Dose Reduction":

Although the average biological half-life is 10 days, it can be decreased by simply increasing fluid intake, especially diuretic liquids such as coffee, tea, beer, and wine. Even though the half-life may be easily reduced to 4 to 5 days in this way, a physician must be consulted before persons are placed on a regimen that might affect their health.

And there you have it. Beer can save your life!
edit on 2014-10-27 by theantediluvian because: (no reason given)

Ya, I used to have a tritium faced watch, I loved it so much, I constantly kissed it. Nonetheless I got lip cancer.

posted on Oct, 27 2014 @ 04:08 PM
link
Sounds like good cause to build a microbrewery. They failed to mention this little item in college. I guess they figured we had enough beer they didn't need to mention it.

A wonderful description of Tritium, it's uses and dangers. Well Done!!!

They're never gonna get me! *falls down rapidly

Thank so very much . Now tell my wife that

This is the global internet. When you posted this, it was after 5:00 PM on the U.S. East coast, and already well into the night in Europe.

A philosophy professor stood before his class and had some items in front of him. When the class began, wordlessly he picked up a large jar and proceeded to fill it with rocks about 2″ in diameter. He then asked the students if the jar was full. They agreed that it was.Visual

So the professor then picked up a box of pebbles and poured them into the jar. He shook the jar lightly. The pebbles, of course, rolled into the open areas between the rocks. He then asked the students again if the jar was full. They agreed it was.

The students laughed as the professor picked up a box of sand and poured it into the jar. Of course, the sand filled up everything else.

“Now,” said the professor, “I want you to recognize that this is your life. The rocks are the important things — your family, your partner, your health, your children — things that if everything else was lost and only they remained, your life would still be full. The pebbles are the other things that matter like your job, your house, your car. The sand is everything else. The small stuff.”

There was total silence as the students absorbed the lesson.

“If you put the sand into the jar first, there is no room for the pebbles or the rocks. The same goes for your life. If you spend all your time and energy on the small stuff, you will never have room for the things that are important to you. Pay attention to the things that are critical to your happiness. Play with your children. Take time to get medical checkups. Take your partner out dancing. There will always be time to go to work, clean the house, give a dinner party and fix the disposal.”

The students started nodding in agreement at the professor’s profound wisdom.

“Take care of the rocks first,” the professor finished — “the things that really matter. Set your priorities. The rest is just sand.”

A student then took the jar which the other students and the professor agreed was full, and proceeded to pour in a bottle of beer — and then another! Of course the beer filled the remaining spaces within the jar making the jar truly full.

The professor asked the student, "Why did you do that?"

To which the student replied, "Just to show you that no matter how full your life is, there is always room for a beer or two."