UFOs Around and Refueling From Our Sun

posted on Oct, 27 2014 @ 09:52 AM
link
With the SOHO telescope now, NASA generates a live-stream of video images from our sun. UFO watchers check it daily for odd and unusual independent-craft, and this NASA feed rules out any photoshopping. There has been a lot of odd craft seen going right up to the sun's surface, or close to it, for a few years now. And very few of them can be ruled out as solar flares.

So I decided to start a thread to keep track of these oddest of UFO sightings. Here's the latest:

www.examiner.com...
NASA/SOHO FEED SHOWS EARTH-SIZE UFO ATTACHED TO SUN
"According to the website, Russian scientists alerted the world to UFO’s that enter the Sun’s orbit about five years ago.

"This isn’t the first time a space ship has been reported orbiting the sun, 'though this latest captured image is humongous in comparison to most of the other reports. Live Science reported what looked like a spaceship back in April of 2012. It was another NASA picture that captured this image. This is just one of many."

If these huge, Earth-sized craft are what we'd call "generational ships," they actually aren't that rare in our galaxy:

"If this proposal is correct, it could be that nomad planets play a dynamic role in the universe. In particular, if life can exist without the warmth of a nearby sun, it raises the possibility that, along with sustaining life, nomad planets could be transporting it as well. While just an idea, it's one that becomes more intriguing when considering not only the number of nomad planets, but the behavior of galaxies."

(Anyone want to guess how many of these inhabited "nomad planets" - over the past millions upon millions of years - have parked their craft as an orbiting moon over a solar system planet they decided to inhabit? OR got tired of roaming the galaxy and getting shot at, so decided to "park" their rogue-planet somewhere safe, like the rings around a gas giant like Saturn?)
edit on 27-10-2014 by MKMoniker because: add content

Here's the first one straight from the NASA/SOHO page 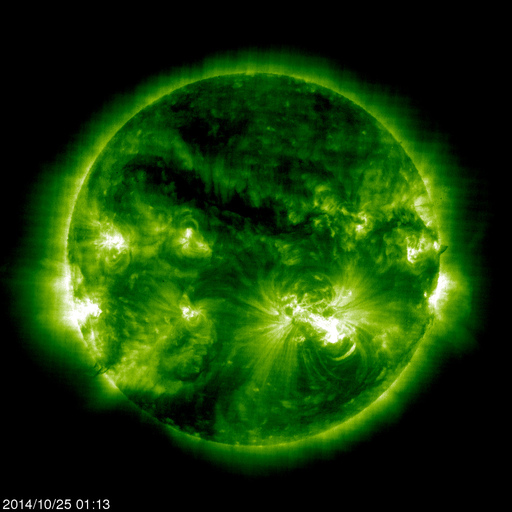 The object in question is at the 3 o clock position
edit on 27/10/14 by SecretKnowledge because: (no reason given)


Here's a close up of it 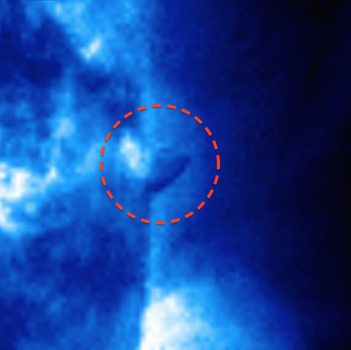 Very interesting picture! I'm looking forward to seeing some of the explanations of this strange triangular object.

Maybe the aliens just wanted to re-heat the sauna?

Heres a close up of the "object" from the link… 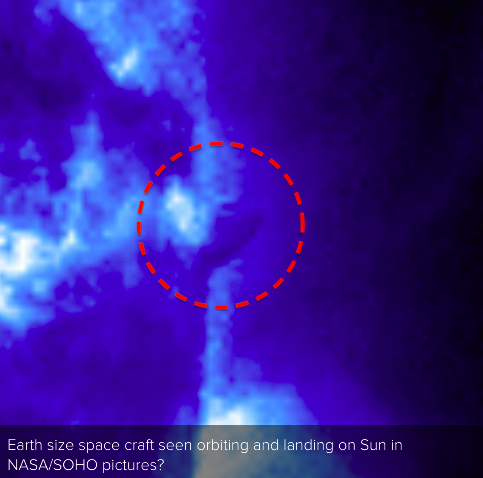 How is this not a solar flare? Because it "sticks out"?

i can't think of anything besides pimple and solar flare.
looks like our sOn is becoming a grownup!
...
i'll see myself out.

Heres a close up of the "object" from the link…

How is this not a solar flare? Because it "sticks out"?


Because the Examiner headlines said it was EARTH-SIZE UFO ATTACHED TO SUN .

Still getting the creative SOHO misinterpretations, I see.

Does this "object" appear in any of the visible light spectrum images?

Or is it always in the extreme ultraviolet spectrum (which is what these images are: UV).


There has been a lot of odd craft seen going right up to the sun's surface, or close to it, for a few years now.


I read this many times and whats been shown has been scary, scary that simple thoughts don't enter a mind for many when such extraordinary claim is made.


So I decided to start a thread to keep track of these oddest of UFO sightings.

Great its not like its been done before on numerous occasions, but hey Boyd got a rehash so lets see where this goes.

Thanks for the full-sun view!

A UFO shaped as a "shark fin" is rare, but not unheard of:

www.syracusenewtimes.com...
1952 - THE FLYING SAUCER AT THE GIRLS' CLUB
“It looked like a shark’s fin at first … I may have been the first to notice the thing.” She says.

"Diane described the object as self-illuminated; “It had a harvest moon orange color sort of appearance. No other lights were visible.”

"She explains that the object drew closer and enlarged in size, “then it flipped or sort of rolled over, I saw this whole thing very clearly, when it sort of turned over or revolved horizontally, it appeared as a disk and approached us very quickly and stopped in the sky about 45 degrees up from the south horizon.”

(This was a smaller shape-shifting craft that only started out like a shark-fin. I have no idea how this shape might enhance that larger craft refueling from the sun.)

I think these images are a plant to discredit the idea. There is a video around that cclearly shows something very bizzare moving away from the sun which shows surface distortion as it moves away

It just broke my record for not doing so in many many months.

Must be a plot to discredit considering the contents of my last post and the sensitivity of the topic.
edit on 27-10-2014 by SLAYER69 because: (no reason given)

I like that idea about the Nomad/Rogue planetary body's, it raises the possibility too of small brown dwarf's emitting no light but warm enough for some form of life to evolve on large moon's close enough to recieve the warmth and radiation.
Also the idea of Rogue Planet's closer to the Galactic core with more ambient star light and radiation including warmth.
Of course a civilization who decided to leave there star system may perhaps colonized such planet's as well,.
Generational ships may host entire civilization but on a humorous side note "who do they think they are stealing from my sun, Get of Ma Yard ya mangy alien dog's an stop diggin up ma lawn".

"How is this not a solar flare? Because it "sticks out"? "

Because what is observed up close is a straight side, a point, then a curved side. These three exact shapes are seldom seen in non-living Nature all together like this, and are usually indicative of an artificial (made by a separate intelligence) construct. And I've never seen a solar flare with a point.

Care to share the video or a nice linky?

It is probably as you point out a corronal mass ejection, such huge dome's of gas are ejected to just above the surface of the sun then fall back into it, they can have a dome like or even spherical teardrop shape as well as the more famous snake like arms of plasma.

However the story say's that it was seen approaching the sun as seen by russian astonomer's, that too could have merely been a coronal ejection that was cast further up, remember the missing planet as well, there was a planet discovered then lost between mercury and the sun which they called Vulcan, it was first seen as a planet, later as what appeared to be broken up and later it was gone but all before modern astronomy could have identificed what it really was, it is generaly believed a planet that close would not survive the tidal and other forces from the sun anyway.

But the concept of a ship harvesting Hydrogen from a star is an old one, what type of technology to survive such radiation and heat though is beyond any science we currently have (at least at the civilian level).

Thanks for your post. Yes, Nomad/Rogue planets are very intriguing. And if they DO carry intelligent inhabitants who "drive" it, they probably have an internal energy/propulsion system that needs to at least occasionally be refueled. And if the outer shell can protect them as they roam thru space, it can probably also withstand a refueling trip right up to our sun's surface.

What do you think of Uranus in our solar system?

www.universetoday.com...
TEN INTERESTING FACTS ABOUT URANUS
"Uranus comes in second as the least dense planet in the Solar System. The density of Uranus is only 1.27 g/cm3. In other words, Uranus would sink in water (water is 1 g/cm3. This low density has an interesting side effect. Even though Uranus is 14.5 times as massive as the Earth, you would only experience about 89% the force of gravity if you could stand on its surface."

"How is this not a solar flare? Because it "sticks out"? "

Because what is observed up close is a straight side, a point, then a curved side. These three exact shapes are seldom seen in non-living Nature all together like this, and are usually indicative of an artificial (made by a separate intelligence) construct. And I've never seen a solar flare with a point.

Where do I pay?


Just because you never have seen was what tipped me over the edge and I am ready to by anything you are selling.


Its in an image,

did you ever think that any shape can be formed with a fluids or gases and at the moment the camera catches a glimpse it might look like something that couldn't form and hold that shape, does it hold that shape or is it simply a glimpse of a moment like all photos are?

originally posted by: skyblueworld
a reply to: SLAYER69

Care to share the video or a nice linky?


Sure, here is the video and the 'Explanation' For what it's worth.

posted on Oct, 27 2014 @ 11:28 AM
link
Glad everyone's having fun with this thread. I know there are other discussions at ATS with "UFOs near the sun," that probably deal with just one incident. But I plan to archive all old and new "Sun UFOs" here, since SOHO has given us a new view of the sun and some possibly "refueling UFOs". Here are some of the older sightings:

nibiruplanetx.blogspot.com...
(March 2012) HUGE SPHERE UFO WITH TUBE ATTACHED TO SUN
Same as posted above, this huge sphere stayed unmoving near the sun for some time, ruling out any "natural" explanation, since the surface of the sun is turbulent and always writhing, without geometric shapes that stay the same over a period of time. The tubing to the surface would be another "refueling" idea, and the spherical shape might indicate another rogue/nomad planetoid.

www.foxnews.com...
(April 2012)LONG SEGMENTED UFO WITH JOINT-AND-ARM NEAR SUN
(The debunkers couldn't quite nail this as a solar flare/coronal ejection, so they came up with ... "camera glitch.")

www.ufo-blogger.com...
(July 2012) GIGANTIC MOTHERSHIP UFO SEEN ABOVE THE SUN
A close-up shows a long ship flying away horizontally from the sun, with at least three large projections on top, and leaving a "stream" below its entire length from the sun.

www.ufosightingsdaily.com...
(Feb. 2013) PLANE-SHAPE SEEN OVER SUN
I'm sure this is no "giant angel", but it IS a double-winged shape around a central cylinder. (Perhaps from another view, the "wings" are actually a bowl-shaped shield.) And the take-away point should be that this UFO has been seen near the sun before. So it may be a craft that stays in this solar system.

www.ufosightingsdaily.com...
(March 2013) ODD SHAPES AND/OR HUGE CRAFT NEAR THE SUN