Recently, I was reading this thread here on ATS: The Off-Malibu Ocean Structure Is Giving Off Radio Signals... 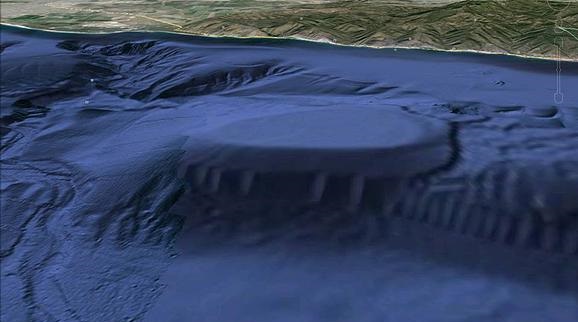 In this thread, there was information from the following source: World UFO Photos and News
(I cannot verify the credibility of this source)

In the above source, it gave the following data on the supposed structure:


The plateau structure is 1.35 miles x 2.45 miles wide, 6.66 miles from land and the entrance between the support pillars is 2745 feet wide and 630 feet tall. It also has what looks like a total nuclear bomb proof ceiling that is 500 feet thick.

Take a close look at that quote, and hold onto a certain piece of information: 6.66 miles from land.

Now, onto another idea:
For years I've held the belief that if the End Times were to come about as they are described in the Book of Revelation in the Bible, it would require a mass persecution of Christianity, even in the Western World. This seems hard to accomplish, though; after-all, Christianity is pretty widely tolerated, save for the few debates about "tolerance" and other matters.

But, there is one way for people to turn on their heels against Christianity: a "higher power" tells them to. But what could fit the bill?

An extra-terrestrial seems to be capable of doing that pretty good. So here is a theory of mine:
- "Extra-Terrestrials" make contact with governments/people of the world
- Offer to lead us to a technological/spiritual/social revolution
- They promise us all of the successes of their civilization
- They urge us to follow in their footsteps, abolish war over land, etc.
- But, they tell us that they were only able to do this once they disbanded religion
- The people, when faced with possible world peace, technological/medical revolutions, will surely follow in the foot-steps of these new "leaders".

Now, these "extra-terrestrials" could be from another planet, another dimension, or even demons... I'm not sure on that one. It could possibly even be a shadow government (think Project Blue Beam). But it seems like a plausible scenario for these "end times" as they are described to come about.

Now, remember that 6.66 miles from land that I asked you to hold onto? Here is where it comes into play:


This calls for wisdom. Let the person who has insight calculate the number of the beast, for it is the number of a man. That number is 666. - Revelation 13:18


(This is the chapter, Revelation 13, which talks about the "mark of the beast", also.)

Did you notice the link in numbers? This USO submerged off the coast is 6.66 miles from land. The number of the beast that rises from the sea in Revelation is 666.

Could this be our clue? Could this be possible proof that the Beast that rises out of the sea is linked somehow to UFOs/USOs?

posted on Oct, 27 2014 @ 09:27 AM
link
Hmm, there is a huge difference in the resolution of the sub-sono data, which makes this picture you posted misleading.

I doubt that this structure will look alike this when viewed at a higher resolution like the subsurface right beside it.


BTW: 6.66 miles.. I doubt that there is a way to describe the distance at this precision! Look at the structure, the boundaries are not distinct enough to define a clear area of this "thing". Which I doubt is really there.

I say "artifacts in the raw data".
I say "debunked". Sorry.

posted on Oct, 27 2014 @ 09:32 AM
link
I say the theory is very plausible
Not about the structure, but about the deception and destruction of Christianity
Aliens would be a perfect way to say..."we really know God"
or even "we were your gods"
and a fundamental change would occur

I am attempting to verify the credibility of the picture with Google Map...

location on the ocean floor

picture of the spot:

This data directly comes from the NOAA.

Here we have a supposed anomaly 6.66 miles out to sea and the OP tries to tie it in with the bible and the end of times.
Brilliant, just brilliant.
I love us humans
edit on 27/10/14 by SecretKnowledge because: spelling

So you are suggesting that we should ignore a theory simply because you are christophobe?

The OP proposed one theory, amongst many other. It is an investigator's duty to consider every possible theories when faced with a mystery.

posted on Oct, 27 2014 @ 10:15 AM
link
This theory doesn't make a lot of sense. So aliens are minions of Satan then? So out of the ENTIRE universe, humans are the only creation of god worth mentioning? Aliens are the manipulators of evil? This theory has a lot of holes in it. But that's what you get for trying to shoehorn science fiction into mythology.
edit on 27-10-2014 by Krazysh0t because: (no reason given)

posted on Oct, 27 2014 @ 10:18 AM
link
Thanks OP for the thread and It does put a seed of doubt in the back of ones mind. I do not know enough about any of it to argue with anyone either way but It is possible that you could be on to something.

Over the last few years I have had several people reveal to me that they think that God is extraterrestrial and that when he returns it will be our contact with the aliens. Your thread makes me wonder if this is the deceiver that the bible speaks of?

Although if we do make contact within my lifetime I will have this seed of doubt and won't willingly be so accepting of what I hear. But thats why I am here on ATS, I question everything.

posted on Oct, 27 2014 @ 10:22 AM
link
I wonder if someone will send an unmanned mini sub down there to take pictures. It could be some ancient structure that sunk into the ocean. If the frequency is being emitted from there, there could be some sort of geomagnetic anomaly that is causing it. Maybe a bunch of whales are down there making strange noises as they check it out.

originally posted by: rickymouse
I wonder if someone will send an unmanned mini sub down there to take pictures. It could be some ancient structure that sunk into the ocean. If the frequency is being emitted from there, there could be some sort of geomagnetic anomaly that is causing it. Maybe a bunch of whales are down there making strange noises as they check it out.

I do think the same as you on this. If our government can spend money to watch grass grow why aren't we exploring and checking into some of these strange occurrences? What a great find it would be if we were to find an ancient structure down below!

I accepted demons are disguising themselves as aliens along time ago.
I accept they are already here amongst us, on the earth, SETI cant find any proof of aliens coming from outer space, so they must already be here.

The 666 distance thing, not really.
The sea? Its interesting, but, its kinda, sorta, iffy

Interesting at any rate

Maybe some giant octopus was dragging down ships full of gold and stuffing them into that hiding place.

If I had the money I would be checking that place out to see what is down there. I'd do it myself, not hire someone else. Everyone needs something to do to keep us from going insane. Alas....it may be too late for me.

An interesting concept. There is nothing in this Earth a coincidence, however, that doesn't mean that this is, what you think it is. Not saying it isn't either... I really like the idea actually, and there has been rumors of the end times involving 'extra terrestrials.' Shows like V, Earth: Final Conflict, and others have come to prepare us for the eventuality. Or so they say. As you say, it is one of the few ways that humanity as a whole would turn on religion. But, you forget that they would include ALL religion, not just Christianity.

Did you notice the link in numbers? This USO submerged off the coast is 6.66 miles from land. The number of the beast that rises from the sea in Revelation is 666.

Could this be our clue? Could this be possible proof that the Beast that rises out of the sea is linked somehow to UFOs/USOs?

I'm really wanting your help here, ATS. Am I onto something?

First off, the writers of the Bible weren't using feet or miles to measure things.

Secondly (and I *knew* that someone would glom onto that 666 number) from where to where is that measurement taken? From the closest point on land to the closest point of the structure? From somewhere nearby on land to the farthest point of the structure, where it ends and the cave begins? With the help of the Google maps distance calculator, which is rather imprecise? Obviously that would change the numbers and then you'd have 6.67 instead of 6.66 and no one would be batting an eye.

Stop trying to see connections where there are none at all. You'll sprain your brain.