posted on Oct, 25 2014 @ 01:13 PM
link
Ten percent of Seattle police feel it is their constitutional right to use excessive force on the public.

Over the past year, the Seattle police department has revised its policies on when police can use force, as part of a settlement with the Justice Department over findings that officers used frequent excessive, unconstitutional force on suspects.

But some 125 Seattle police officers responded by filing a lawsuit challenging the new rules. In their view, the new policies infringe on their rights to use as much force as they deem necessary in self-protection. They represent about ten percent of the Seattle Police Officers’ Guild membership. The police union itself declined to endorse the lawsuit.

By the same logic, wouldnt everyone then have the same right when it comes to police?

Haven't you heard? The police should have the right to flashbang and headshot whoever they please. Especially the elderly and children. If you say something they don't like while you're dealing with them it is their RIGHT to beat the holy living snot out of any civvie that annoys them. All they have to do is claim self defense and BAM! Paid vacation. Seems like a pretty sweet gig... For an asshole.

Now the link works, thanks.

I wrote a thread on this very topic a lil while ago.

A very tough link to get working, my apologies.
I kept getting a space in the url code like this [/ur l] but was not there when I went to edit

But yes there is an update in the article

I lol'd pretty good, thanks TrueBrit.

That was my thought exactly; terminate their employment as they add a high risk to Seattle PD being sued.

Screw that, I do not think the possibility of the department being sued is even in the top five of reasons to get rid of these rotten bastards!

Here are my top five.
1) Because it is the right damned thing to do. There is far too much arse covering in law enforcement, and that needs to stop.
2) Because only by doing so can the public fully trust that the officer they are dealing with has the protection of the public at the forefront of his or her mind, which should ALWAYS be the case.
3) Because paying people to violate the constitutional rights of citizens is a waste of tax payer money, in that organised criminals do the same job, but do not draw a wage from a government institution in the process.
4) Because law enforcement requires adherence to the law.
5) Because law enforcement professionals should NOT be psychopaths without any moral fibre or empathy, and those are the ONLY sort of people who would consider trying to defend and protect their "right" to behave badly toward those they are charged to protect and serve.

After that, that is when the consideration can be given to silly matters like how much it costs the department in legal fees!

This week, a federal judge summarily rejected all of their claims, finding that they were without constitutional merit, and that she would have been surprised if such allegations of excessive force by officers did not lead to stricter standards.

The officers claimed the policies infringed on their rights under their Second Amendment and under the Fourth, claiming a self-defense right to use force. Chief U.S. District Judge Marsha Pechman pointed out that the Second Amendment protects the right to bear arms — not the right to use them — and that the officers “grossly misconstrued” the Fourth Amendment when they claimed that it protects them, and not individuals who would be the subjects of police force or seizures.

If they appeal, the officers have little chance of faring better. But their lawsuit does shed light on the sort of resistance officials and police chiefs face as they seek to make their policies more humane. The lawsuit employs rhetoric hostile to the idea of treating vulnerable suspects such as the mentally ill differently, and calls DOJ’s findings on excessive force “highly suspect.”

Crazy to think they believe the Fourth Amendment protects them but not their victims.

I will agree with your top five reasons; my reason was meant to be one that the Mayor, council and city manager would find worrisome.

I guess you are right.

Realistically speaking, that is the element that would force the most reaction from local government!

It's also your constitutional right to bear arms to keep a rogue government in check and by extension this includes violent pigs acting on behalf of the rogue government.

The Seattle police department in this instance has declared war on the civilian population.

I say you give them one.

I like it, Fire those who brought the lawsuit.

posted on Oct, 25 2014 @ 06:22 PM
link
well pretty hard to argue the mindset of these thugs now this little revelation has come out.....they enjoy hurting people what a surprise

posted on Oct, 25 2014 @ 06:23 PM
link
Excessive force is warranted on gang members and punks who play the knockout game.

Cops use ur logical mind not your emotions...wear the badge with honor.

They have a right to defend themselves


Its cheaper to sell them to organ traffickers

Take the money and give it to local animal shelters

Recent ATS thread: Police and thier oath of office. 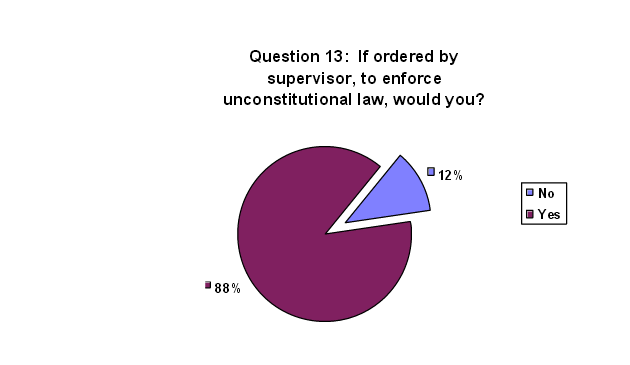 Since they want constitutional protections for themselves when they wont even uphold that very same constitutions values for everybody else , they are nothing but hypocritical MERCENARY GUNS FOR HIRE!

posted on Oct, 25 2014 @ 09:04 PM
link
This shows you how pathetic these people are at understanding constitutional rights and they are supposed to be the people who interact with people on the streets and are supposed to show deference and respect to peoples rights. Pathetic, the entire case should be laughed out of any and every court and the judge should require the police force to educate the officers on the constitution.

At the very least someone should give them a primer so that they know their place under this constitution.

Second, police have authority to enforce the law because they are granted power by statutes, regulations and policies. The police do not have "rights", they have authority granted by statute to their position, office or commission as police officers.

Third, the rule of law has a hierarchy where at the top is constitutional law, then statutory law, then regulations, then policies. Each one trumps the other in a legal fight and the constitution dictates that the people have rights.

Fourth, The people have rights and when some people choose to work as police officers, they necessarily lose the ability to claim that the government can not tell them how to act as police officers or how they exercise their authority to enforce the law because it is the law makers and the rule makers that define the powers granted to police officers. To hold otherwise would be to define the police as a fourth branch of government that receives its authority directly from the constitution and this cannot be the case because there are no constitutional provisions that support that notion. Besides, the day that happens will be the day that the United States dies.