The face-to-face encounter that ended the attack on Parliament

Zehaf-Bibeau continued down the hall toward the wooden doors of the Library of Parliament, where he lodged himself behind a stone pillar beside an alcove to the right of the library's entrance. Vickers' office is around the corner, a few metres away.

Hearing gunshots, Vickers grabbed his side arm, an automatic pistol, and immediately ran out. His security team, who had been cha sing Bibeau, yelled to Vickers that the suspect was hiding in the alcove.


The face-to-face encounter that ended the attack on Parliament

Vickers immediately ran behind the other side of the pillar. That put him an arm's-length away from Bibeau.

According to guards, Vickers actually could see the barrel of Bibeau's gun pointing out, a foot away.

Vickers did not hesitate.

In one motion, sources told CBC News he dove to the floor around the pillar, at the feet of Bibeau, turning on his back as he landed and simultaneously firing his weapon upwards at Bibeau.

SNAP! DAMN do not mess with Canada's Sergeant at Arms, Kevin Vicker. Did you see that matrix shiz? Now I know why they call him the Sergeant at Arms. There's your security. All those cops running down the hall...I thought it was them letting off all the rounds but it wasn't. Just this guy 'taken care of business' Props. 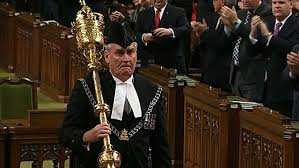 I'm a friend of Canada .. I have a lot of love .. I have friends all over Canada.. french speaking and not... the's definitely a hero, things could have gone much worse... I'm alarmed that one my friends I talk to almost daily, I've not heard from since Monday.. and I know he's not anywhere near both events... I've just been waiting for him to weigh in .. so I'm still waiting..he does work for hire so it takes him many miles away sometimes... but in light of these random attacks I worry about all of my Canadian friends... even those these attacks so far seem to be related to soldiers and government rather than citizens..

posted on Oct, 25 2014 @ 01:29 AM
link
a reply to: miniatus
Try not to fret too much, I think while yes this wingnut was focused on jihadism, previously it was crack, what I mean is I do not believe this is the start of something bigger..both cases are about weak damaged people. I fear not one bit and im sure your friend is all good.

Obviously Sergeant At Arms Vickers is to be congratulated for his balls out obliteration of the threat, hell, just for being able to get to the floor fast enough to do it, despite clearly being a man of some considerable age by the looks of him! Fantastic effort. He has earned himself a shot or two of single malt, and I doubt anyone would disagree.

What I find interesting is the bullet hole in the Library. Now, I am pretty sure, from what the media are reporting, that Vickers rounds are all either in the suspect, or the wall immediately behind the suspects location. The engagement was point blank, angled upward, and at roughly ninety degrees to the direction in which the hallway extends away from that location. The library appears to be at one end of that hallway.

So someone loosed a round right along that hallway, and I think from the description of events, that it is possible that the round that they found in the library, will turn out being from the suspects weapon, perhaps having been fired either in an impact related spasm, or discharged as the suspect hit the ground.

In either case, leave it to a fellow named Vickers to do the necessary in these situations... That name is after all found printed on some of the most badass bits of war gear from the last century, including tanks, machine guns, bombers, and a plethora of other bits of kit that rocked the faces of the enemies of freedom!

Good effort that man! Someone buy him a steak!
edit on 25-10-2014 by TrueBrit because: Grammar and spelling correction.

I totally agree with your comments about Mr Vickers . Although the posted picture doesn't show it as he was obviously overcome with emotion , He has don't screw with my country eyes . I am willing to bet his kids are models of what you would hope your kids to grow up to be . Respect

Check out my thread
www.abovetopsecret.com...
To see a newscast about the event. Not only did Canada's sargent of arms take him down Hollywood style, their national broadcaster gave a wicked speech later on in the evening.

Makes you really wonder when u see an event unfold with big brother America, 10 times the size but if it happened there cops would have unloaded 500 rounds, killed a few pedestrians, blamed it on the victim, then the newscasters would spend the next two weeks arguing about gun control and somehow blame everything on Obama.

Well, anyway... Well done Canada. Although it's a very sad story it was handled with unbelievable professionalism.
edit on 25-10-2014 by boncho because: (no reason given)

Oh, I have no doubt that he was emotional about things. It's not every day that a person who works in a parliamentary building in a western nation, has to straight up John Woo a fellow to death mere yards from his own office. I hope that SAA Vickers gets any assistance he may need with the psychological fallout of his actions. Balls out as they were, he put himself in significant peril to carry out his duty, and to be absolutely frank, he killed a man. No matter what the motivation of the person was in his ill advised invasion of the parliament building, he was still a human being, and taking the life of a human being takes a toll.

Godspeed to Mr Vickers in recovering his composure, and dealing with the long term effects of his badassitude.

This is, I believe, what you meant by emotional?

posted on Oct, 25 2014 @ 03:17 AM
link
Jeesus stay away fom the kool aid...this event was scheduled.....right out of the CIA playbook.....
CSIS or the mounties set this up to influence the election and motivate Canadians to patriotic spasms....
The guy was nuts....simply goaded by the gov boys to blow his cork.....

Mr. Vickers you sir are a hero and deserve your countries highest honors. I hope the men guarding the critical places in the US are cut out of the same cloth this man is. This is a honest to goodness hero.

The Federal election a full year from now? You have to be kidding.

originally posted by: TrueBrit
a reply to: hutch622

This is, I believe, what you meant by emotional?

Check out my thread
www.abovetopsecret.com...
To see a newscast about the event. Not only did Canada's sargent of arms take him down Hollywood style, their national broadcaster gave a wicked speech later on in the evening.

Makes you really wonder when u see an event unfold with big brother America, 10 times the size but if it happened there cops would have unloaded 500 rounds, killed a few pedestrians, blamed it on the victim, then the newscasters would spend the next two weeks arguing about gun control and somehow blame everything on Obama.

Well, anyway... Well done Canada. Although it's a very sad story it was handled with unbelievable professionalism.


Sometimes I see posts that are just so pathetic I can not help but call the poster out..........Pathetic in fact does not do your post justice conspiracy website or not. Always looking to tie good old America into it somehow I see.

What I see is a nut job trying to cause fear..........And one class act of a hero doing his part to keep the calm. Spin this a thousand ways and it will always land on that spot.

Yes that is the shot i was talking about . True hero . I think Canada needs to make a new kind of medal for this man . Could you imagine a couple of hundred Mr Vickers facing Isis . GAME OVER .
Agreed i am sure it could be very stressful for mister Vickers . I sure the follow up will be thorough .

I think it will be important in time going forward, that the media and the government do all that they can to ensure that Mr Vickers gets the privacy that he will need to move through any psychological process he needs to, in order to recover from what must have been a rattling experience.

Although he was a police officer, and moved through the ranks of policing, attaining plaudits for his diplomatic manner of getting his job done, this incident at the parliament building, is the first in which he has ever had to shoot anyone, according to the Wiki at least. I cannot find any other biographical data on him, but there again, I have no idea where to look at this point.

Agree with you. When facing some idiotic ideology you have to realise that you aren't dealing with anything from your own ideology and tough hard response is the only means of dealing with someone who turns on his own.

What bothers me is that islam has two faces attached to one tail: one the Ooh its such a lovely religious about peace which is the soft infiltration method islam uses to get itsw feet under the table and get lots of people into Western countries and the hard liners who peddle the military aspect of islam and convert people like the man who got himself killed.

It is important to realise that these are the two faces of the same ideology that those who follow it want to inflict on the whole world.

Mr Vickers is a brave hero and I hope all people dealing with islamic threats will use the same conviction he did. It will only be by knowing that we are defended by men like Mr vickers that we can still enjoy our way of life. Already restrictions have been placed on freedoms we enjoyed, purely because of the islamic threat and I can't think of anything in truth that islam contributes to Western countries. In fact we are paying to have islamists living amongst us knowing we can't trust them behind our backs - as born out by the soldier that turned his guns on his comrades in his barracks (or place of work can't remember). Perhaps its time to ask the question do we want to be watching our backs and pay for all the restrictions and regulations that we now have to put up with just so people who have brought a medieval religion into our countries can live happily, slowly demanding more and more islamic ideas be put into practice.

The one I do feel sorry for is his mother who must feel so sad within and furious about those who turned his brain. They are the one that need shooting.

Now countries all around the world, even Islamic ones will have to be paying out for extra security around their parliaments because hard-liners, once wired up into action by the poisonous imams who want bigger congregations and mosques will all be trying it again to see if they can do better.

posted on Oct, 25 2014 @ 07:06 AM
link
The video says that Vickers "was in his ceremonial garb" (minus the hat) when he shot the shooter. Must have been a hellava sight for the shooter to look down at this guy dressed like that sliding over on the floor right before shooting.