Felix Baumgartner's parachute record is broken in secret 135,000 foot jump from the edge of space

Alan manually deployed his parachute after freefalling (with his stabilizing drogue) 4 minutes and 27 seconds, opening at an altitude of 12,476 feet. His total freefall distance was 123,414 feet (37,617 meters)—a new FAI World Record.

Alan landed at 09:24—14 minutes and 19 seconds after dropping away from the stratospheric balloon. His total flight time was 2 hours, 23 minutes and 40 seconds. He made a safe landing and in great condition, and of course, in high spirits—mission accomplished.

Eustace cut himself loose from the balloon with the aid of a small explosive device and plummeted toward the earth at a speeds that peaked at more than 800 miles per hour, setting off a small sonic boom heard by observers on the ground.

The previous altitude record was set by Austrian daredevil Felix Baumgartner, who jumped from 128,100 feet on Oct. 14, 2012.

setting off a small sonic boom heard by observers on the ground.

His IT guy told him "hey, the router's frozen, we need someone to turn it off and on again"


I think it is strange that a great chance for some advertising was passed over , can you imagine Richard Branson doing this in secret

The homepage for the project.

Lots of pics in the gallery.

It is odd this was not publicized, but cool all the same. Thanks for the heads up. 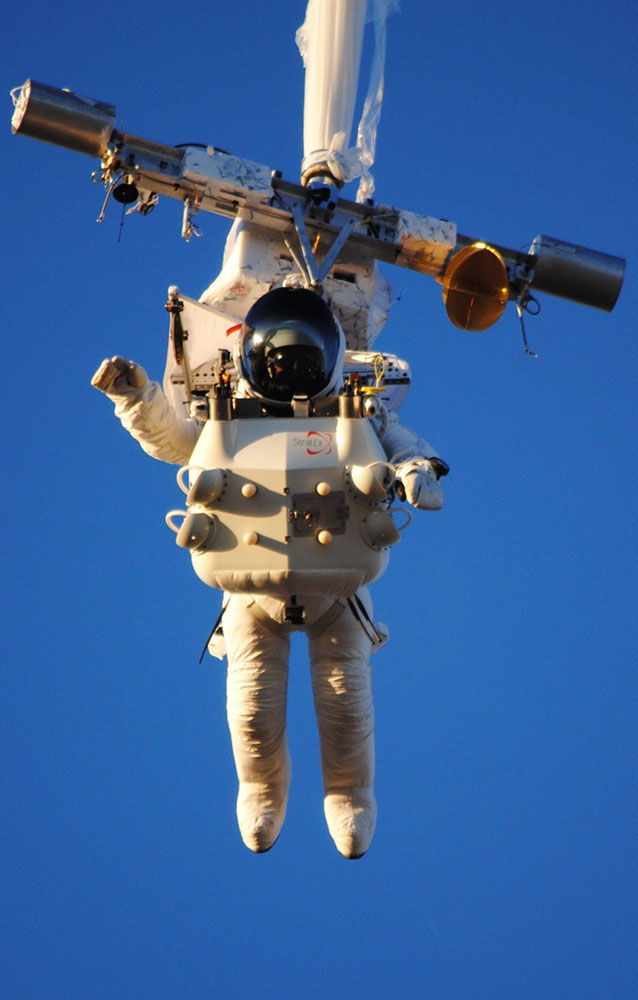 thanks for the photo i think it is pretty weird this was not all over Google they shot themselves in the foot not being in on it , he looks like buzz lightyear in that gear

i just really want to see this video

setting off a small sonic boom heard by observers on the ground.

Do I sense doubt, or am I misinterpreting your post? If he was falling fast enough, it's possible that he created a sonic boom.

Felix Baugartner made an audible sonic boom when he did his then-record jump. A whip crack is a small sonic boom made by the end of the whip as the tip travels faster than sound.

posted on Oct, 24 2014 @ 11:03 PM
link
Sometimes men do things just for the sake of doing it. He even said that Google did offer him funding and sponsorship on his project, but he refused it because he didn't want it to become the circus that surrounded Red Bull's sponsorship of Baumgartner's jump.

I understand his thinking.

If you set a lofty goal, failure can be crushing if you've promoted that goal to the entire world. There's a certain amount of satisfaction in achieving something quietly. If you were to fail, the public eye isn't on you, but if you succeed, the accolades are still the same as they would be if you had bragged all the way to the starting line.

Now I wonder who will be the first to jump from orbit with a ballute and chute system.

Howdy sock glad you dropped by , i was just thinking this will start a rush to get even higher and beat the record

You mean to tell me this feat didn't require corporate sponsorship, a television licensing deal, months (if not years) of hype and a whole boatload of drama to complete?

Well color me jaded from now on

It's great the things you can do with a multi-million pay cheque plus stock options every year , i wonder will this go on his expence account

The technology is available now to make the leap from space.

The sky is no longer the limit...

posted on Oct, 24 2014 @ 11:46 PM
link
How fantastic! This area of exploration is still live and well, going where no man has gone before. What a rush to vicariously share their derring-do! S&F, Doogle.

Eustace and Baumgartner stand on the shoulders of a giant, though. Let's don't forget on of my few heroes Col. Joseph Kittinger. The daredevil badass pioneer that started it all.

Joseph William Kittinger II (born July 27, 1928) is a retired Colonel in the United States Air Force and a USAF Command Pilot. Following his initial operational assignment in fighter aircraft, he participated in Project Manhigh and Project Excelsior in 1960, setting a world record for the longest skydive from a height greater than 31 kilometres (19 mi).[1] He was also the first man to make a solo crossing of the Atlantic Ocean in a gas balloon and the first human to observe the curvature of the Earth.

Serving as a fighter pilot during the Vietnam War, he achieved an aerial kill of a North Vietnamese MiG-21 jet fighter and was later shot down himself, spending 11 months as a prisoner of war in a North Vietnamese prison.
In 2012, at the age of 84, he participated in the Red Bull Stratos project as capsule communicator, directing Felix Baumgartner on his record-breaking 39-kilometer (24 mi) freefall from Earth's stratosphere, exceeding Kittinger's earlier freefall in 1960.

And yea cant Forget the Col... nobody had a clue what would happen to him and he still went up.

I watched a documentary about Kittinger a couple of years ago when Baumgartner broke the record and wow was that guy brave to even think about doing it back then , and how nobody attempted it in all those years shows how difficult a task it is

I was chating about that with a friend of mine who had read a book about this thing being actualy a space ship that would pick people who supposedly are on a base on the moon and then work as a medium to bring them back to earth.

Maybe I am seeing ghosts but it would make sence if this kind of jump would be a test for them to come back undetected now wouldn't?

I like that he did it in secret, Soviet style. Just him, his crew, and the birds. Of course afterwards the publicity will roll in, and the women, and the free drinks in bars...