Just saw this pop up on social media, apparently a large percentage of U-Verse customers just got EAN messages on their televisions. 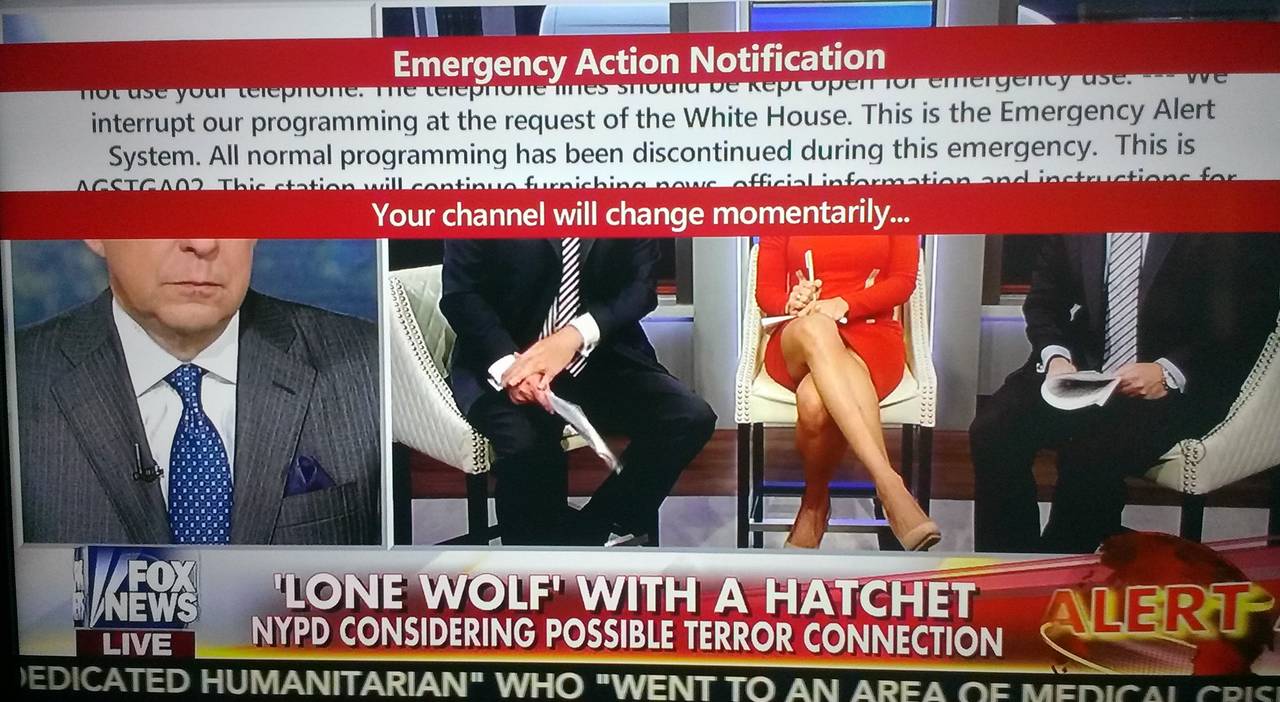 They said it was a mistake, but looking at wikipedia has the following:

So, if only the president can activate it, why was it activated? Could this be an "unofficial" test of the system? (EDIT: There's no big red button with "EAN" on it that only the President can push, and mistakes can happen.)

With the Nuke drills in NY, Obama previously saying his greatest fear is a nuke attack on NY...

And now the EAN system is mysteriously activated, but we're assured "DON'T PANIC."

Only the president or his aids can order the use of the system, not directly activate it.

It's like a soldiers gun. The responsibility falls to the pres and his aids BUT accidents do happen. Soldiers misfire despite training and tv programmers and controllers make mistakes despite training.

It's not as if there's a red button that only Barry and Hillary are allowed to push that activates it hehe. That's the picture i first got reading the op

I believe you've taken the statement that only the president or his representative can activate it a bit too literally.

One of them, in my mind, is labelled "Remove Putin". Maybe a little red LED with a label that says "Hillarybot Battery Warning" or something.

I'm pretty sure Barry has a red phone that dials straight to the Powerpuff Girls though.

If I had seen that on my television this morning I probably would have made sure my bug out bag was in order put it near the door. Glad it's just a fluke, but still very frightening.

People getting stuck on one channel and can't change it after the yreceive this message... WTF?

TC companies got hacked or they are just testing the message systems? Or maybe Obama pushed the emergency TV button, forgot and went to golfing course?

That's the flip side to the integrated tv/Internet system we have. The cable system was for a brief moment proprietary tech and you had to connect locally to effect things locally. Now tho our tv's are technically connected to the Internet and I'm not talking about the ones that have apps and a network connection.

It's now possible to hack into and effect what on people's tv's from remote places using the Internet. Even possible to effect single tv's or chunks of them.

Not saying this was a hack job over an accident but its completely possible.

I'm pretty sure Barry has a red phone that dials straight to the Powerpuff Girls though.

S###, The Mayor was way more competent a leader than Mr. Obama...

posted on Oct, 24 2014 @ 02:15 PM
link
Since this is one a single provider and in only a few cities it clearly is not an attempt to activate the system which would be on all providers. So the problem is going to be at U-verse alone.

That's pretty much a given, yeah. I just wonder who pushed the wrong button or flipped the wrong switch.

Whoever did that probably created a job opening for themselves.

Let's not sully such a great cartoon with obama references huh?