World's Oldest High-Altitude Settlement Discovered, Dates Back to 10,000 BC

posted on Oct, 23 2014 @ 01:43 PM
link
Archaeologists have discovered the oldest high-altitude settlement in the world and it's on the Pucuncho Basin plateau in the Peruvian Andes, about 14,700 feet (4,500 meters) above sea level. Interestingly, the first clues to the existence of the settlement were obsidian tools found in the 1990's during the excavation of a 13,000 year-old fishing village, called Quebrada Jaguay which is located some 100 miles (160 kilometers) away. The absence of a river which could have carried the volcanic rock down from the Andean volcanoes led archaeologists to believe that the obsidian was quarried and brought down from the Andes by humans. This started a years long hunt for evidence. 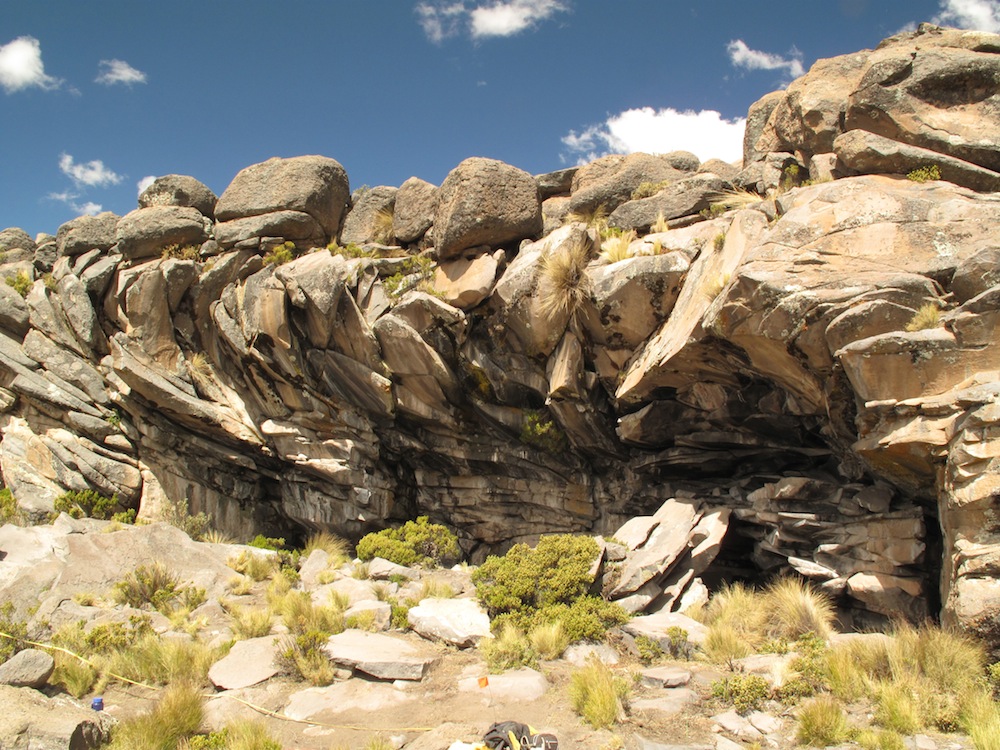 The sites — a rock shelter with traces of Ice Age campfires and rock art, and an open-air workshop with stone tools and fragments — are located nearly 14,700 feet (4,500 meters) above sea level and were occupied roughly 12,000 years ago.

The discovery, which is detailed today (Oct. 23) in the journal Science, suggests ancient people in South America were living at extremely high altitudes just 2,000 years after humans first reached the continent.


After years of searching around the plateau, the researchers found a rock shelter with two alcoves, ceilings blackened with soot and walls decorated with rock art. The site also showed evidence of burnt detritus from ancient people's campsites. The rock shelter was used for thousands of years, starting around 12,400 years ago, and may have been a temporary base camp where herders sheltered from the rain, Rademaker said.

The coastal obsidian point likely came from a nearby outcropping, which would've been an ancient open-air workshop at the time, the researchers said. The workshop contained hundreds of ancient tools, from spear points to scrapers to bifaces, or hand axes, some of which dated to 12,800 years old. The researchers also found large mammal bones from vicuña, the wild ancestors to alpacas, similar animals called guanacos, and taruca deer.

At this point, it's not known if the same culture inhabited both the coastal village and the high-altitude site or if they were occupied by different groups who were trading partners. The find also raises interesting questions about exactly how long it took for humans to undergo the genetic adaptations that enable people to live in the extremely high-altitudes of the Andes today as it's believed that humans first settled the area only 2,000 years earlier.

Or perhaps this find might contribute to pushing back the date of earliest human habitation in the region?
edit on 2014-10-23 by theantediluvian because: (no reason given)

posted on Oct, 23 2014 @ 03:03 PM
link
a reply to: theantediluvian
That's awsome, thanks for posting.
I just scanned the post quickly, I'm on lunch break, but I did notice one thing, they are still hanging on to the old paradigm of when people arrived in the new world. Monte Verde has occupation layers going back nearly 30k years at toca de priea, in Brazil, humans were making tools 23 k years ago,

after I get off work I'll check the linked articles.

Very interesting, chasing down resource points is always a good strategy. I wonder if this is proof that adaptation to high altitude was occurring or had occurred by this time.

I wonder how many sacrifices to dark gods took place there? It's a shame caves can't speak.....especially one's with Ha Satan's fanged mouth.

Yeah I start to get altitude sickness at 3,500 meters (11,500 ft) and highest I went was just under 18,000. At that the only thing I could eat was Pepsi, yak steaks, chocolate and rice (not mixed together)! I was glad to get down after three days. Once children are born that high they adapt. I remember some Gurung I knew didn't like going to Katmandu or into the Terai as they felt so sluggish in the lowlands.