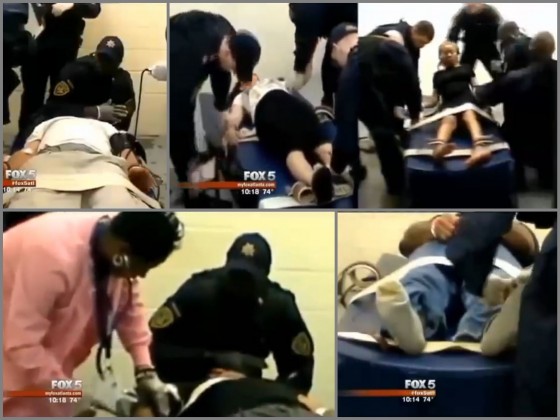 
According to the officers carrying out this extreme violation of our fourth amendment, every car will be checked to make sure drivers are not impaired. With enough probable cause, they will seek a blood search warrant.

In 2005, the Supreme Court ruled that it is not unconstitutional for the state to hold down Americans and forcefully withdraw blood. A January 2013 ruling affirmed that a warrant must be obtained for the process, although police could dispense with the warrant requirement in an “emergency”.

This is very wrong. Sometimes officers pull probable cause out of their arse and they will also define an emergency situation as they see fit. Trying to bring them to court will only complicate your life and at that point the damage has already been done.

A search warrant will be submitted to that magistrate, and if issued, a nurse will draw blood to check for alcohol and/or drugs in the suspect's system.


The time and location of the checkpoint will be released Friday, Oct, 24

This is not their first attempt at drawing blood for evidence. These videos are from last year but its important to see that they're trying to make this a reality. What do think ATS? Anyone from the area willing to flex their constitutional muscle and drive through one of these checkpoints?


FissionSurplus
+27 more
posted on Oct, 23 2014 @ 09:39 AM
link
Due to the nature of my job, I am often in contact with law enforcement. I was listening to one while in a hospital ER, and he was saying that if anybody refuses a blood draw, he'll make them sit there and GET A WARRANT, because, by God, he was going to draw their blood and they were going to have to do it OR ELSE.

This is where we're at now, people. A lot of cops have a God complex, and they no longer serve people, they want to rule over them.

posted on Oct, 23 2014 @ 09:45 AM
link
You can argue that driving is a "privilege" all you want, but this is too far. When you violate somebody's bodily autonomy in such a way without any probable cause, you are committing assault. Period. The end.

Basic fundamental tenants of law do not magically disappear just because authority figures wish them to. This is a direct assault on the bodily autonomy of a human being, and goes way over the line of a reasonable limit.
edit on 23-10-2014 by AnIntellectualRedneck because: (no reason given)

I'm not scared. They can shove their needle up their arse.

My blood is mine.

Nobody makes me bleed my own blood, nobody.

stormcell
+14 more
posted on Oct, 23 2014 @ 09:48 AM
link
There isn't even any need to take blood samples. There are optical sensors that can read alcohol levels through the skin

If cops are insisting on sticking needles into people, it isn't for law enforcement reasons.

originally posted by: FissionSurplus
Due to the nature of my job, I am often in contact with law enforcement. I was listening to one while in a hospital ER, and he was saying that if anybody refuses a blood draw, he'll make them sit there and GET A WARRANT, because, by God, he was going to draw their blood and they were going to have to do it OR ELSE.

This is where we're at now, people. A lot of cops have a God complex, and they no longer serve people, they want to rule over them.

Where I live police doesnt speak to you, they speak at you
They walk around knowing they are "more" than others, after all, they can insult you and all you have to do is reply and you've given them enough reason to detain you!

If police were to serve the people, I'm sure they were also to allow people to discuss matters with them etc, but no, there is no room for diplomacy when you have a variety of weaponry on your hips, and cuffs at the ready in case the peasants dare think they are equal human beings...


I know a guy my age who became a cop. Im sorry if this sounds like satire but its very very true. We were good friends and he entrusted me with a lot of personal stuff, two of them being him having massive parental issues (he never got to do anything and was bossed around) and his immense insecurity over his "manhood", being a virgin at age 24 and complaining regularly about his subpar genitalia.

I dont think every cop is like that, far from it, and he is a good guy mind you, however, Im also 100% sure this is his way of getting back at society, of getting back at the people he perceives his now "victims" to be, as in his eyes, they're the people that make him feel insecure etc...

Unless its all a coincidence in which case I feel sorry for reveiling his secrets here (anonymously but still, I'd hate to misinterpret him)

The right to travel upon this planet is inherent in all of us. When we transitioned from horses to cars, we swallowed wholesale the lie that automobiles were too dangerous to operate without a license. Having been around horses, I can tell you that you are far more likely to die on horseback or to kill someone else in a horse drawn carriage without experience than you are in a modern car. At least the car stops when you hit the brakes.

Someday, I hope, the people of this world no longer accept the need for licenses or passports to tour their collective birthright. We should have one global society, not because we need to be administered by a centralized government, but because we have a right to travel anywhere, to see anything, to work where we please, to study where we please and to engage in commerce with people far away from the place of our birth. These barriers that we have allowed our governor's to construct are chains we wear on a daily basis. I hope they rest pleasantly upon you.
edit on 10 23 2014 by Nechash because: (no reason given)

Perhaps we should direct our attention to the judges that sign those warrants. Who are they? What are their credentials? Are they partisan? Elected or appointed? I used to think that Judges were the buffer between an authoritarian state and us.

I protect my self and my country and its constitiuon with lethal force against these paid terrorist. Untill there are more of us saying this isnt right than them pushing it these violations of amendments will happen.

A civil war is whats coming. The Govt is prepping against its enemy, us. Have you ?

Also, the blood draw tests for substances other than alcohol.

The ACLU so far has said they do need warrants to draw blood, which at this point is better than no-warrant blood drawing, and I'm hoping that's not the last we hear from the ACLU on this issues. And this was as a result of an 8-1 SCOTUS decision against warrantless blood draws, which you can read about here to some degree. [Link]

So again, as with no-knock warrants and blood draw warrants, it falls to the judges, who usually do what the popo wants them to do anyhow.

I had a friend get pulled in for DUI and he wasnt drinking or using anything.....

THey forced him to do a blood draw and got a warrant for it....while he waited at the hospital for 3 hours because he refused to let them take it...

THey got the warrant then threw him in jail for DUI , he bonded out and went to court later it was dismissed,......

His laywer said that the county had a particularly bad habit of having PRE SIGNED WARRANTS for blood draws, all they had to do was fill in the information for the person they want it issued to......

THe cop admitted in court he made him stay at the hospital that long to teach him a lesson, said they had the warrant "with in the hour" this was around 3 am mind you......

This is crooked as hell and this is how they will play it , they will already have them signed and ready to go , this county already does......

And NOTHINGS been done about it

Can we leave this crap hole already? Moon base, Mars, something?

ok sure....but are they gonna skip that and go straight to blood draw even if they suspect alcohol....and im not sure about ohio law but in many states you can refuse the whole test and just take an arrest with higher suspension penalty if you lose the case. Id make em get a warrant every time...
edit on 23-10-2014 by rockpaperhammock because: (no reason given)