He is stating that Russia has restarted there remote viewing program.
He states Russia and China are attempting to replace the petro dollar.
He claims a North Korean nuclear event, possibly related to the tunnels they have been digging under the south.
He claims no US election in 2016.
He claims Ukraine is finished and not safe.
He claims the secret to surviving the kill shot is to be away from the Fukushima ocean and air plumes (not sure if he meant nuclear plants in general) Generally be away from cities (fresh water is key to survival. Small groups that have enough skill trades (doctors, engineers, ect and the ability to protect the communities)
He claims Northern Japan will be uninhabitable and that the Japanese government will relocate the population of Tokyo because of Fukushima.
He claims the western pacific coast will become sterile, and that mass movement of people in this area will move inland but between extreme drought and the Madrid Earthquake zone that things will be bad.
He claims the pacific ocean will become sterile.
He claims that currently the solar maximum is in a second peak and it will not be one solar flare but multiple flares that damage our grid.
He claims the combination of solar energy effecting our Earth core will lead to massive weather changes.
He claims the US north east will not be a area that survives mainly because of nuclear power plants failing.
He claims the current sun cycle last occurred 11,500 years ago.
There is a wealth of information on this episode I encourage you to give it a listen and if you can prepare as much as you can while you still can. 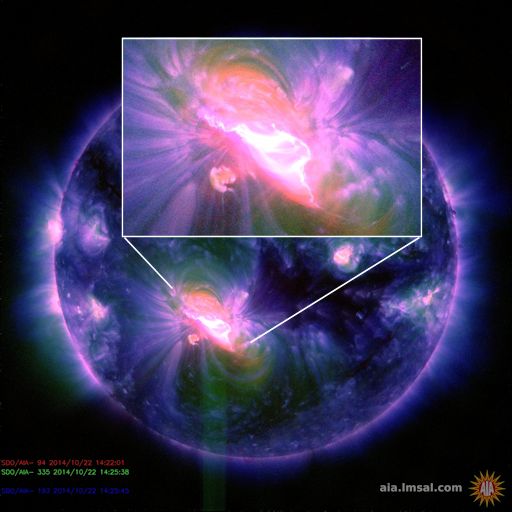 He claims the events described in revelations are currently happening.
He claims to see terrible wars, but this is eclipsed by a large part of the Earth becoming barren and that a outside race will eventually help us rebuild our planet.
edit on 23-10-2014 by LDragonFire because: (no reason given)

Well then, he has something for everyone then.

I wonder if he will claim success at seeing the future if a bee farts in the US West Coast.

I have to wonder sometimes.

I completely dismiss this as more of the UFO/Conspiracy circuit nonsense.

No elections in 2016? But who will run America then?

Obama? The Military? Aliens? ISIS? Or is it gonna be The Walking Dead.

originally posted by: pheonix358
a reply to: LDragonFire

Well then, he has something for everyone then.

I wonder if he will claim success at seeing the future if a bee farts in the US West Coast.

I have to wonder sometimes.

Not too worried about Dames here. If the world is supposed to go then so be it.

Given the prediction failure rate, we should feel pretty safe now, from everything except other humans.

originally posted by: LDragonFire
He claims the pacific ocean will become sterile.

If the entire Pacific Ocean died, then human life on planet Earth itself would die. Pretty sure we need the oceans alive for us to survive.

What would happen if the oceans died


The ocean is the lifeblood of the world, and the survival of humanity is inextricably linked to its health. According to the International Programme on the State of the Ocean (“IPSO”), the “Global State of the Ocean Report” is due to be published soon in 2013, but according to IPSO: “We already know that the ocean’s health is in a critical state.”

The ocean (1) creates more than half of our oxygen; (2) it drives weather systems; (3) it modulates the atmosphere, and (4) it provides vital resources. As it happens, the ocean transcends national borders to maintain life everywhere on Earth.

posted on Oct, 23 2014 @ 06:15 AM
link
a reply to: LDragonFire
S^F
I heard the entire broadcast when aired.. It comes on at 12 noon here so I don't miss any sleep.. Great review of the broadcast except you did leave out how nice and civilized he thought St. Petersburg, Russia was.. My Russian friends always told me don't go unless it is summer time for you will die very very cold...!

Ed Dames is not someone I put much stock into what he says... Everyone knows we are one solar X-15 flare away from no electricity... So even I could throw some bones and say "watch out, death and destruction might come our way"!

No elections in 2016? But who will run America then?

Obama? The Military? Aliens? ISIS? Or is it gonna be The Walking Dead.

posted on Oct, 23 2014 @ 06:31 AM
link
I believe the poles of the sun have already flipped and we are in the new low for the next 11 years. this last cycle has been very disappointing as far as flares go. Not convinced Dames is of sound mind anyway, I think he is just looking to keep his websites and prophecy (remote viewers) business alive. and C2C is great underground exposure. Doom on people, but Im not buyin this one.

posted on Oct, 23 2014 @ 07:11 AM
link
This guy is whacked. In 97 he said all the first born children would die, gee, wonder where he got that one. Then, this kill shot crap, he's been crying for more than a decade. He originally said it would begin when a space shuttle flight gets cut short due to impending radiation. Hmm, not thinking that is happening now. I don't think George Noory is too scared over this cuckoo's predictions. Oh, I forgot, in 2001, he claimed he was inside the head of the bind, torture and kill serial killer, Dennis Rader, and would reveal him at any moment. Rader was arrested in 2005 due to sloppy letter writing on his church computer. Cuckoo Dames had nothing to do with it, he was clueless. Hey, I was in charge of a secret CIA remote viewing program, yeah, that's the ticket, and I was a general. Go ahead, just ask the CIA, if they give no comment they are lying. Oh, yeah, almost forgot, I also was in charge of reverse engineering UFO's at Area 51. Just ask the Air Force, they'll tell you or they're lying. See a pattern with these whack jobs?
edit on 23-10-2014 by Longshots because: (no reason given)
edit on 23-10-2014 by Longshots because: (no reason given)

posted on Oct, 23 2014 @ 07:31 AM
link
I predict the guy will need a prescription for depression and anxiety. He sounds suicidal. Maybe one thing on his list will come to fruition, but I think things will be fine if everyone works at getting along here on Earth.

posted on Oct, 23 2014 @ 07:38 AM
link
This guy, Dames, has been wrong so many times that it's interesting that people still give him air time. When an obvious fake comes into the tent (i.e. see John Edward) the best thing to do is to take another flap out and leave him alone in there to talk to the walls (canvas or plastic, in most cases).

But it looks like he's laying his reputation on the line with this one....wait, he's done that before, a dozen times or so. If I saw him I'd shine a flashlight in his eyes and see if he thought it was the sun.

posted on Oct, 23 2014 @ 07:56 AM
link
I am always a bit sceptical of Dames... and yet I keep him on my social networks, because some of what he claims is similar to things I have seen in altered states (and partly why I went to live where I am now and became somewhat of a prepper).
My husband, who is totally not into woo-woo, woke up one night with a prophetic vision of the same once.

I usually ignore him, but today, my tv came on by itself in front of my bed at five AM. I could see the remote control beside me and no one had touched it. My dog is acting wierd and growling at nothing, and I am feeling terrible without reason.

Then I see we are currently at a 95% risk of M flares, and 55% for X flares, and that makes me wonder if changes are not imminent.... I guess doomporn is attractive when you are feeling under the weather. It's probably just fluctuating hormones, but some part of me can't find any good reason to write off completely the possibility of vibes in the collective consciousness either....

posted on Oct, 23 2014 @ 08:22 AM
link
Dames should be ashamed to call himself a former Major. I would wage good money that he was RIF'ed out. (RIF) Reduction in Force, for officers, that means they are as far along as they are going to go and the military kicks them to the curb so better ones can move up.

But I will give him credit for entertaining me while driving in the wee hours of the morning and listening to his predictions. NONE of which have come true, but are entertaining to listen to.

But even he must admit to himself that he is starting to sound like a broken record. He's probably not making any more money off his doom-porn, and I wouldn't doubt if it is actually starting to eat into his pension...so he's calling it quits.

Good luck out there in life Ed! Thanks for helping me stay awake during the long drives. It was always fun to listen too.

Ed Dames has been saying these things about the killshot for almost 20 years.

I have heard him him say at least twice that this was his last communication and was moving to the Ukraine with his Russian girlfriend.....blah blah blah.