Will update as it comes in. Soldier (one of two) was guarding war memorial. CPR is being performed. Medics have just arrived. Police on scene. Lots of witnesses. No news about second soldier.

A bit numb at the moment to think it has begun in Canada.


The memorial is located across the street from parliament. Three to five shots fired. The gunman ran toward parliament building, jumped over some bushes and was lost from view. 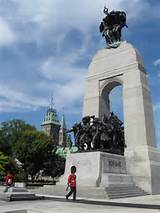 This is disturbing, keep us informed. Thoughts and prayers are with him. Who would have done such a thing?

Vasa Croe
+1 more
posted on Oct, 22 2014 @ 09:16 AM
link
Do they have a suspect or were there any witnesses? I can't find much on this story. What kind of coward shoots a soldier that is guarding a memorial?

Soldiers are now patrolling parliament hill. Gunman's car is abandoned nearby on a public street, a beige Toyota without plates.
edit on 22-10-2014 by aboutface because: (no reason given)

posted on Oct, 22 2014 @ 09:25 AM
link
a reply to: Vasa Croe
well Vasa put it this way, im guessing he wont repressent the majority just a faction.
And everybody will be A-Ok with that.

originally posted by: aboutface
Another link

Soldiers are now patrolling parliament hill. Gunman's car is abandoned nearby, a beige Toyota without plates.

Hope the bomb squad is nearby....that car could be loaded with the perp quietly waiting for enough people to get close then BOOM.

Perhaps the Jihadi's have finally switched tactics.. For years, they've always tried to pull off increasingly complex attacks and invariably they are found out and caught - it always seemed obvious to me that these sort of "hit and run" attacks by small groups, maybe a car bomb campaign or something along the lines of Mumbai would be far more effective.

Now it seems they've finally twigged, these sort of attacks are much harder to detect and stop, not to mention they can be carried out by a small group and be repeated frequently, rather than sacrificing your willing peons on some exotic suicide attack.

Let's just hope they catch the smegger and any of his cohorts before they cause any more grief.


A soldier has been shot in Ottawa at the War Memorial.

Paramedics have arrived on scene and witnesses report that on-lookers were performing CPR on the soldier who is non-responsive.

Witnesses say a man was seen running towards the Parliament buildings with a shotgun.

Headed to the Parliament buildings??
this comes on the heels of the incident yesterday in Montreal link
this is a little too close with relations to the Canadian military in both attacks
edit on 10/22/2014 by whatnext21 because: (no reason given)

originally posted by: PLAYERONE01
a reply to: Vasa Croe
well Vasa put it this way, im guessing he wont repressent the majority just a faction.
And everybody will be A-Ok with that.

Well if it turns out this is yet another Canadian attack by an extremist, I would say the place of worship for this guy and the other guy that was killed, should be scrutinized. These people don't just come up with this stuff on their own.....it is taught.

Does Ottawa not have a CCTV system with ANPR? How can a car without plates get that close to Parliament without triggering the suspicion of the Fuzz?

WTF is going on in my country this last week?!

I can almost here the Patriot Act ( Canada Version ) being written already...

originally posted by: stumason
a reply to: Vasa Croe

Does Ottawa not have a CCTV system with ANPR? How can a car without plates get that close to Parliament without triggering the suspicion of the Fuzz?

Good question.....would like to see just how close it actually got. I guess since the guy didn't go back to his car for a getaway, he must have other plans. Come to think of it, why would a car not have plates anyways? Maybe it was stolen and didn't want it to register on any cameras or something? I mean having no plates is going to make you look a LOT more suspicious than having plates stolen from some other car.....odd.

posted on Oct, 22 2014 @ 09:32 AM
link
Hes dead after a little battle in Parliament. Heading down Montreal road now going to try to get a look. This after the attack in Quebec yesterday.
edit on 22-10-2014 by canDarian because: (no reason given)

posted on Oct, 22 2014 @ 09:32 AM
link
Foxnews is reporting shots fired inside the parliament building, anyone corroborate that?

Canada, welcome to the suck.

Hopefully no one is killed by this idiot.

a reply to: aboutface

That's what I thought - steal plates for s similar car and you can avoid detection, at least for a short while.

No plates? Stick out like a sore thumb and you are asking to be pulled. I know, my rear one fell off a few weeks ago (on my driveway, it turned out - saved me a few quid) and I was barely 10 minutes into my drive before the Police gave me a tug.

Amid the chaos, MPs were among those taking cover. Michelle Rempel, a Conservative MP from Calgary, used Twitter to communicate with the outside world: “Mom im okay Im in hiding.” She also tweeted: “is it clear people? shots were outside caucus room”.

posted on Oct, 22 2014 @ 09:34 AM
link
a reply to: Vasa Croe
I agree with everything that you are saying, and would like to add that in the coming future our collective head in the sand blind tollerance is going to cost more lives.