French ultra-conservatives are pretty upset that there's a giant [snip] in the middle of Place Vendome, says Gawker.

The artist behind the 78-foot inflatable foreign object, Paul McCarthy, calls it a tree. In fact, "Tree" is the piece's official name. 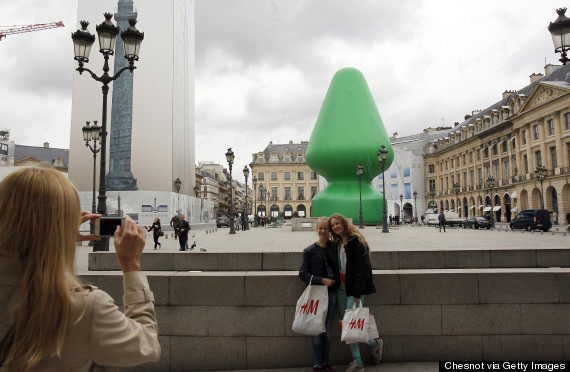 Unfortunately, they're not the only ones who took umbrage with the ambiguously sexual sculpture. On Thursday, the artist was attacked by an unknown assailant while installing "Tree."

The director of FIAC, the Contemporary Art Fair, which is hosting the sculpture, says the attack was regrettable and not representative of France as a whole, but that her office has received complaints that McCarthy was corrupting and misusing the “sacred symbol” of the Christmas tree, according to ArtNet.

I consider myself an art enthusiast and also and artist but this installation has me wondering right now. . .

Personally, from first glance it is hilarious and the fact it is in France makes it even more satirical. His perversion of the 'Christmas Tree' has left many in the general area very upset though, I wonder what Santa would say?

So is this the future of our art world, has the induction of the "Jackass" crew into the MOMA created a trend where Howard Stern would be considered moderate? I for one love it - In France!
You won't find me putting this sculpture up in my backyard!
(Did I really just say that)

posted on Oct, 22 2014 @ 09:00 AM
link
I think it is great fun, and am not unhappy it is ruffling the feathers in France. It would not hurt if they could get over themselves and have a giggle. 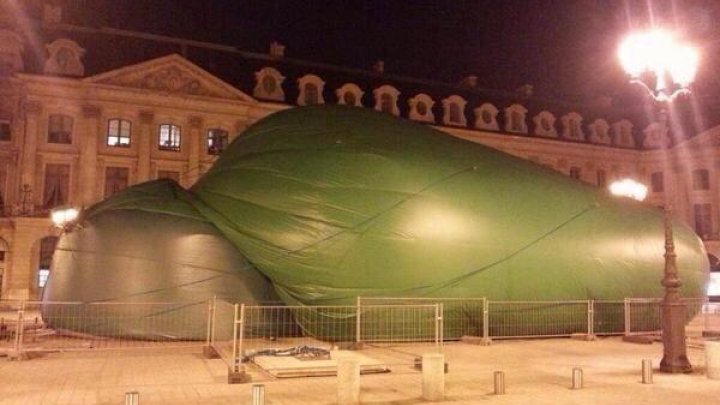 Somebody 'popped' it!
Stupid vandals, I guess it was a sore subject for them.
We'll always have the memories though and the pictures.

originally posted by: Indigent
the plug was destroyed already


What?
They pulled the plug on the plug?

I guess the French aren't into that.

Personally, from first glance it is hilarious and the fact it is in France makes it even more satirical. His perversion of the 'Christmas Tree' has left many in the general area very upset though, I wonder what Santa would say?


Yes... butt what gets me laughing are two things... How come those conservative people in the general area are upset, why should they get upset it just looks like a "ahem" simple xmas tree no... *cough cough*

Secondly, and even more hilarious... notice where the plu... erm xmas tree has been *coughs* erected :

Slap bang right next to the Vendôme Column (the large ALSO rather rude looking monument in the square)...

I'm guessing that people in France think it looks like a phallus. Maybe one from a giant green man from Mars perhaps.

If they think this looks like a wee-wee, those French guys must have strangely shaped genitals.

You schould read eeehm visualized up on your pron

There is only one way to know such things, an object identifying app like

dont you have snails to torture anyways?

originally posted by: Indigent
a reply to: Rodinus

There is only one way to know such things, an object identifying app like

dont you have snails to torture anyways?


Just downloading the snail pics right now should have everything finalised for tomorrow morning... *Licks lips*

posted on Oct, 22 2014 @ 03:03 PM
link
Ok, I can defend pr0n as free speech, but art? Are we sure these conservative French folks are upset over the sexual connotations of the Tree or are they actually rather "stuffy" in their notions of what makes good art?

Perhaps a pro-lapse in judgement?