South African athlete Oscar Pistorius has been jailed for five years for killing his girlfriend Reeva Steenkamp. Judge Thokozile Masipa, issuing the ruling in court in Pretoria, also gave Pistorius a three-year suspended sentence for a firearms charge. Pistorius has been taken to the cells. The prosecution had called for a minimum 10-year sentence; the defence for community service and house arrest. Pistorius was convicted of culpable homicide but cleared of murder.

I followed this fairly closely from the beginning, and I definitely think he should have gotten the 10 years the prosecution asked for.

It is very clear from this guy's history that he was abusive to the victim as well as to other women, was into power and control over others, and enjoyed gun play.

How is he different from Phil Spector? 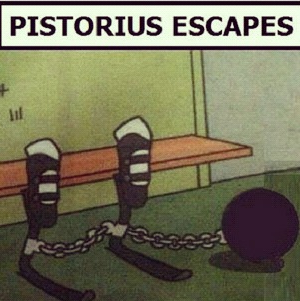 Anyway, If the prosecution wanted 10 years they should have asked for the maximum of 15. Yeah, he got off very lightly IMO.

His Story was BS from day one. Out of all the witnesses who heard the argument and the gun shots he was the only one who didn't alert their partner to goings on. He said he whispered to her that someone was in the house. BS.

If I was her family, I would be thinking, "the sooner he gets out, the sooner he's dead. "

originally posted by: nrd101
a reply to: Soloprotocol

If I was her family, I would be thinking, "the sooner he gets out, the sooner he's dead. "

exactly, i doubt he'll make it that far. someone will have him in prison!

posted on Oct, 21 2014 @ 04:51 AM
link
you'd think someone like him would appreciate and respect life, given how he would barely have one himself without the artificial legs.
all that is his life, depends on people wanting him to live it to the fullest, he could just as easily been another gut on a wheelchair otherwise.

that would appear too… wealthy.

originally posted by: stargatetravels
And out in less than a year - justice, don't you love it?

They can't keep him in too long, he needs to be out for the book signing tour!

He may become a better person; he many try to do good to in some way make up for what he did...but he will always be in the prison of his memories over what he did; he will never escape from that.

So what is that reason?

There are some wealthy "owners of capital" that have invested a large sum into marketing these people, as TV or sports personalities. For example if the Giudice's (Housewives of New Jersey) served a real prison sentence some "really really rich" people would be out of their "investment". So, even though the Giudice's seem rich by our standards, you have to remember the people who write their paychecks are far, far wealthier. That's why celebrities like Bieber get off scott-free, the judges wouldn't want the wealthy people (whom help get them their appointments/elections) to lose money, so they keep the cash cows, whom these really rich people OWN, out of jail. They can't simultaneously be in jail and making easy money for the "owners of capital". Thats why regular people go to jail quicker and for far less severe crimes because no wealthy "owners of capital" have invested anything into them, so its easy to throw regular people away like trash.

Another example is Hope Solo, whom was accused of domestic violence, she WILLplay in the games, she will likely also not get much of a criminal punishment as well.

The only way this is going to change is if the population starts giving "mob justice" AFTER these people have been found not guilty or given lesser sentences. The courts are not going to do it,PERIOD, so its on the community to instill justice AFTER these guys think they got away with their crimes.
edit on 21-10-2014 by boohoo because: (no reason given)

Then I'd kill him.

Until the day we mere mortals begin paving the streets with the corpses of these elite bastards we will continue to suffer the consequences of a lop-sided justice system.

The only thing hes sorry for is the fact he got caught,the defense did a good job portraying him as the poor little man when in fact his past girlfriend says hes a sociopath was violent and that she was scared of him.

Yeah - legs his legs had very little to do with the tragedy. Apparently the whole incident happened because Oscar wanted to buy a new bathroom door, but Reeva was dead against it.

originally posted by: Saurus
a reply to: UNIT76

Yeah - legs his legs had very little to do with the tragedy. Apparently the whole incident happened because Oscar wanted to buy a new bathroom door, but Reeva was dead against it.

oooo she was a beautiful woman but if you can believe the rumors on the net she was in the process of leaving him as he was playing about and it looks like she was to , but they are pushing for a re trial any more from your end