posted on Oct, 20 2014 @ 08:19 AM
link
Saw this press release today from Presstv who are a lot more trustworthy than our current Media Propaganda outlets like CNN and BBC.

The Ebola outbreak in West Africa might be a resurfacing of Zaire’s Ebola infection spread, where the US Central Intelligence Agency was suspected to be involved with, an American investigative journalist says.

“When you look at the original outbreak of the Ebola in 1976 in Zaire,” Wayne Madsen told Press TV.

“We see a year when the US was violating a Senate law that forbid the US from engaging in the Angolan Civil War and we saw Zaire being used as a bait for the CIA and then we saw the outbreak of Ebola in Zaire. The same year that George H. W. Bush was the director of the CIA.”

CIA should be probed for Ebola's origin in Zaire

It's no surprise to me that people in the independent true media are working out the CIA's involvement in things like Ebola. I always thought that there was something not right about all this.

The CIA are into all sorts of clandestine and Covert operations. They are criminals. In South America they are nicknamed the "Cocaine Import Agency" for obvious reasons and every where else the are "Criminals In Action". Obviously not all CIA agents are criminals. Much like the FBI there are agents that have no knowledge of the shady dealings of their bosses.

But are the CIA releasing Ebola as a Bio Weapon? Possibly! I heard reports the the US Biological Weapons team were in Zaire right before Ebola was released.

Problem with this information is how far would it go? How can it go anywhere if our Mainstream Media are controlled by the same people creating Bio Weapons?

But then again can we call this a Bio Weapon? It hasn't killed a lot of people. Is it a control tool? Distraction from Syria? Distraction for the DeBeer Diamond Mine in Sierra Leone? Dunno! 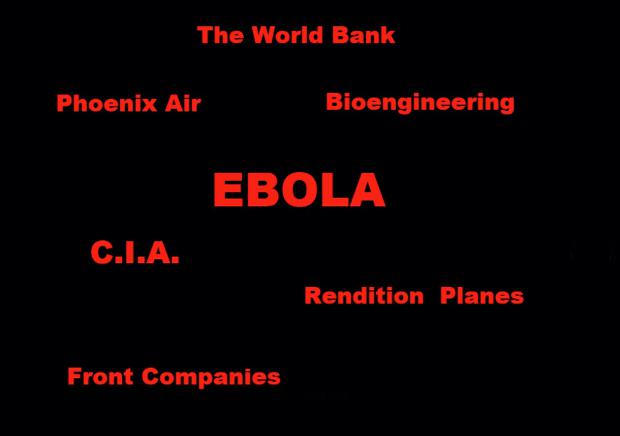 But I'd definitely agree that it's being used as a distraction from real problems World Wide...
I won't list them, we all know them...


But Ebola gives people something to worry about because of its transfer ability...
A "who knows when it'll be in my town" kinda fear...
Keeps people occupied because they don't believe terrorism, or law-changers can get them...
"But Ebola can, we must fear Ebola"...

& it's all bollocks if you ask me!

Why would CIA release Ebola in Zaire? Please explain. CIA may be evil, but it always has a reason for doing what it does. (Or are you just going to believe it because PressTV says so?)

originally posted by: CharlieSpeirs
I dunno if the CIA are involved...

But I'd definitely agree that it's being used as a distraction from real problems World Wide...
I won't list them, we all know them...


But Ebola gives people something to worry about because of its transfer ability...
A "who knows when it'll be in my town" kinda fear...
Keeps people occupied because they don't believe terrorism, or law-changers can get them...
"But Ebola can, we must fear Ebola"...

& it's all bollocks if you ask me!


When the economy and banks collapse again, they'll blame ebola.

Precisely my point pal...
One of the things I didn't list...

& That's much more worrying if you ask me...
That's something that truly was planned!

But as you said they have their scapegoat already...

Well you can add that to AFRICOM and the CIA as they seem to all be connected.

Between 1970 and 1975, the period the NAS-NCR scientific advisors informed DOD decision-makers that AIDS-like viruses could be readied, American cold war efforts focused on Zaire and Angola. Following the withdrawal of American forces in Vietnam, Secretary of State Henry Kissinger ordered the CIA to begin a major covert military operation against MPLA (communist bloc backed) "rebels" in Angola.

Zaire, indebted by over $4.5 billion to the International Monetary Fund, and headed by President Mobutu—paradoxically regarded as one of the world's wealthiest men with "a personal fortune put at $2,939,200,000 [1984 estimate] banked in Switzerland—was wooed by NATO allies during the 1970s (principally the U.S.) to be a staging area for CIA backed, Portuguese, French, and mainly South African mercenaries.
"American corporate investment, notably in copper and aluminum, doubled to about $50 million following a 1970 visit by Mobutu to the United States. Major investors included Chase-Manhattan, Ford, General Motors, Gulf, Shell, Union Carbide, and several other large concerns."
However, in 1975 Mobutu apparently turned against NATO allies and increased negotiations with China and Russia. He proclaimed his intention to nationalize foreign owned enterprises. In June 1975, following the CIA's thwarted efforts to convince the U.S. Congress to appropriate more funds for Mobutu and the Angola program (A total of $31.7 million had already been "drawn from the CIA's FY 75 contingency fund" which was "exhausted on 27 November 1975") Mobutu expelled the American ambassador and arrested many of the CIA's Zairian agents, placing some under death sentences.

See! The CIA are up to their necks in Biological Warfare! And Money Laundering. And Drugs. And Murder. And Terrorism.

This just goes on and on!

The following year, in October 1976, the "Ebola Zaire virus" broke-out in "fifty five villages surrounding the [Yambuku] hospital" first killing "people who had received injections." Mobutu then ordered his army to "seal off the Bumba zone with roadblocks" and "shoot anyone trying to come out" so "no one knew what was happening, who was dying, [or] what the virus was doing."

By the end of 1976, the Zairian leader had reconciled his differences with the American intelligence and corporate communities believing that Zaire would continue to reap his non-communist allies' social and economic aid. On April 4, 1977, Mobutu suspended diplomatic relations with Cuba; on April 21, reduced ties with the Soviet Union; and on May 2, he cut ties with East Germany.

Meanwhile, according to John Stockwell, Former Chief of the CIA's Angola Task Force, "the United States was exposed, dishonoured and discredited in the eyes of the world," as "15,000 Cubans were installed in Angola" despite the CIA's best efforts and a continuing policy of lying "to State Department officials, Congressmen, American press, and world public opinion in varying degrees, depending on the need" about the CIA's covert military campaign in Angola and Zaire.

Throughout 1976 and 1977, Mobutu, NATO, and the CIA, constrained by the Tunney, Cranston and Clark amendment which prevented the expenditure of American funds in Zaire/Angola, except to gather intelli-gence, remained embroiled in the "Shaba rebellion" against allegedly Russian-backed "Katangan rebels.

There's a heap of information here. Don't take my word for it. Read it yourself.

AIDS and Ebola - Where did they come from?

Once you get down to the nitty gritty it looks like the start of their Population Control program. Granted, it has not killed a lot so far but it way become more virulent later. But not very for Whites!

posted on Oct, 20 2014 @ 10:23 AM
link
The first out break was in Sudan and Ebola would make a terrible bio weapon as it become inceffective in the air. So using a bomb or spray from and aircraft can not be used and it would have to be dirctly delivered and some guys wandering your village in hazmat suits might be notinced. The Russians did study weaponizing Ebola at Biopreparat, they came up with Ebolapox that could be used but, with no way to vacinate against it, they did not go any further because it would be a weapon that would be just as big of threat to them as whomever they used it on. And thus the problem and rarity of bio weapons.