Satan's Hollow - The Tunnel To Hell

posted on Oct, 19 2014 @ 06:46 AM
link
This video by a YouTube channel called "Believe, A Paranormal Experience”, follows two young men on a road-trip across country to visit paranormal places. Their last stop requires venturing into a storm drain known as “Satan’s Hollow” which allegedly hosts/hosted devil worshipers and demonic rituals.

Just a nice little video for your enjoyment for Halloween.

posted on Oct, 19 2014 @ 07:44 AM
link
Honestly really tired of hearing about "Satan"
Yes I know Halloween is approaching

Just seems to be more pronounced everywhere now
I guess to each there own right?
Just my opinion

what utter twaddle - politest response I can type

How awesome, a road trip visiting paranormal places. This would be my kids' dream vacation.
Do I believe in this stuff? Absolutely (due to a house we lived in for ten years) but I won't elaborate right now. I do believe that my oldest daughter attracts spirits, beginning from the time she was about 7 months old. She's 20 now.

I can see haunted places and spirits, but Satanic rituals have zero to do with Halloween.

This is just about some rebellious kids playing Satan worshiper, who don't know a drain pipe from a tunnel into Hell.

originally posted by: MichiganSwampBuck
This is just about some rebellious kids playing Satan worshiper, who don't know a drain pipe from a tunnel into Hell.

If they wanted to experience the real tunnel to hell they can try coming off Route 139 to the Holland Tunnel during the morning commute into lower Manhattan.

I can hear Satan laughing every time I try this...


The truth is neither politically correct or popular.

“Hypocrites get offended by the truth.” ~ Jess C. Scott

I grew up in metro Detroit, certainly Satan had some property there. I've visited Chicago, Denver, L.A., but near stepped foot in N.Y., but I totally believe your story.

I know that a lot of people love the Big Apple, but Mo-Town, Chicago and L.A. was scary enough, so I don't intend to ever visit that section of hell on earth.

originally posted by: TzarChasm
a reply to: sled735

When every year pastors and priests talk about how evil and satanic Halloween is, it no hard for people to make a connection.

Just seems to be more pronounced everywhere now
I guess to each there own right?
Just my opinion


Yes I know, I feel the same way every christmass, easter etc.

Samhain (like Beltane) was seen as a liminal time, when the spirits or fairies (the Aos Sí) could more easily come into our world. Most scholars see the Aos Sí as remnants of the pagan gods and nature spirits. It was believed that the Aos Sí needed to be propitiated to ensure that the people and their livestock survived the winter. Offerings of food and drink were left for them. The souls of the dead were also thought to revisit their homes. Feasts were had, at which the souls of dead kin were beckoned to attend and a place set at the table for them. Mumming and guising were part of the festival, and involved people going door-to-door in costume (or in disguise), often reciting verses in exchange for food. The costumes may have been a way of imitating, or disguising oneself from, the Aos Sí. Divination rituals were also a big part of the festival and often involved nuts and apples.

The older religions were better, less about control and more about survival and community.

Satans Tunnel looks exactly like a tunnel that my group of childhood friends would play in and around. We called it the Tunnel of Love though because of some of the litter we found strewn about the place

We spray painted "Tunnel of Love" on the outside entrance but inside the tunnel, we had a bit more fun with it. We would spray paint 666 devil horns and all other sorts of evil crap all over the walls. If someone found it today they'd probably think it was a place where Satanists come to meet and preform sacrifices and what not. However, it was just a group of 6 little girls having a bit of fun.

The tunnel was a creepy place, there were spiders everywhere! Yuck! Oh the memories this video brought back!

originally posted by: TzarChasm
a reply to: sled735

It wasn't my intention to connect Satan with Halloween. I was merely posting a scary video because people like to get scared during Halloween; at least that's been my observation all throughout my 50+ years of life.

Let's just follow OPs lead. I have a vid for holloween as well.

We used to hang out at this one cemetary in Everett that was super creepy like out of a movie. In fact they did film some movie scenes there for Assassins starring Sylvester Stallone.

The best part was when we would get to Rucker's Tomb, a giant stepped pyramid that houses the bodies of one of the founders of everett and his family. We would climb to the top and sit there doing whatever it is kids do.. my cousin claims he did a girl up there and I'm inclined to believe him. it had a cool view of the city itself. But sometimes you would get chased out by the cops, or even worse, the caretaker... an old man who would come flying out of nowhere weilding a rake or shovel or some other weapon to try to scare you out of there. We would come across other curious people too.

One time a guy came around the corner wearing leather and gothic type stuff and holding a freaking battle axe just a few feet away from me. I tried to get away so fast, i stumbled and broke some bottles of beer. I was standing there at the corner of the base and a Gothic dressed guy came around the other side of the pyramid. My drunken mind was considering whether to stay and try to save my friend who was at the top of the pyramid from being sacrificed to satan himself, or jump off the base, 5-6 feet down to the grass and save myself when they guy said "we mean you no harm" or something similar, and i was too panicked to understand it. i said "what?!" and the unarmed guy said "he said we're not going to hurt you" Then i calmed down a little bit and we started talking and became friends for the night, chatting about the tomb and other things. There's a million other stories about the interesting characters and urban legends and stories we heard. I met one guy who was very disrespectful to the tomb, breaking beer bottles by throwing them at the tomb entrance, etc... well when he went to climb it, he had an accident. People say that some invisible force pushed or threw him off the pyramid. Forever after that, one of his eyes was all messed up looking. We always showed respect and cleaned up our mess. But sometimes we would see broken glass all over...

Here it is. The base extends a bit outside the frame. 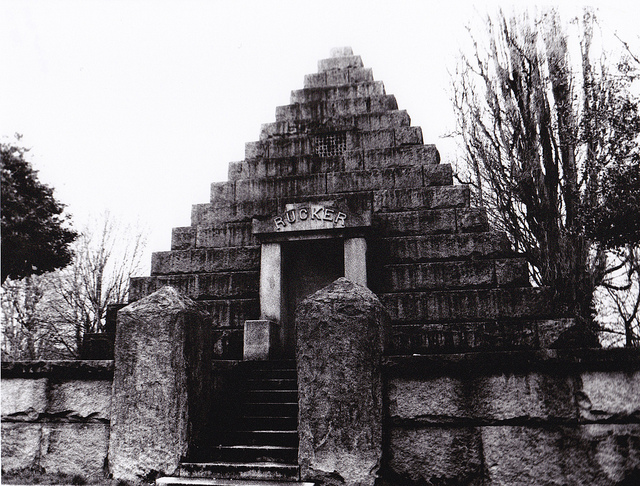 posted on Oct, 19 2014 @ 05:47 PM
link
If the OP hadn't said so, I was going to observe that this was not linking Satan to Halloween. It was just a video of supposed paranormal locations these people went to visit, and one of them happened to be called Satan's Tunnel because of its past.

But here, just to show that it's not only places of supposed Satan worship that get a bad rap for paranormal activity - try this list of haunted churches.

Yes, churches always give me the creeps.

When I was young, my cousin and I would go to the local church we attended by ourselves when no one was there and play the piano and organ. I always got the strangest feeling of being watched, and we both could hear noises in the basement. It cheeped me out!
Even during Sunday School class, which was held in the basement for youth, I always got an eerie feeling in that place.
There was something there, that I am sure of!

If having connections to death is one of the prerequisites for becoming haunted, then churches would seem to be natural sites for hauntings. Many have their own graveyards and many hold funerals.

But yes, the church I used to attend growing up had a distinct vibe to it, too, and it was different than the feeling of comfort I get when I feel God's presence.


originally posted by: TzarChasm
a reply to: sled735

It wasn't my intention to connect Satan with Halloween. I was merely posting a scary video because people like to get scared during Halloween; at least that's been my observation all throughout my 50+ years of life.

which is why i'm going as myself.