You just can't trust technology these days. What was not startling, is where the information is being fed (China, Russia, India).

Don't have much to add more than that. You know if you've downloaded the app or not. The apparent solution is to take your phone back to the store from where you bought it, and have them restore it to factory settings to erase the Trojans the apps introduce.

posted on Oct, 19 2014 @ 12:45 AM
link
my fladhlight app is #4 on the list on google play when you type "flashlight app" and it is 1.08 MB but it has many features other than just plain old "turn the light on and off". I checked the permissions and it only has one "camera/microphone". Apparently the camera and mic are bundled together into one permission and it needs to access the camera because the way flashlight apps work is they access the light which is normally used for the cameras "flash" feature.

Maybe he meant the top 10 downloaded flashlight apps and not the first 10 listed when you type in "flashlight app". Not sure how Google Play decides to list the apps when you search.

Mine is called "Tiny Flashlight + LED" by the way. I did not check to see how many downloads it had. But i did check a few other apps near the top and they do indeed have some invasive permissions.

Wow - 500 million owners potentially all have given over all their private life stuff to nefarious agencies within countries who all happen to share one thing in common - they are also BRICS nations.

The scary thing is that this is just what those 3 countries are apparently doing, can you imagine who else may be involved in data collection through deception.

A smart phone is a lot more than just a tracking device, it is a condensed version of your life and in the wrong hands could be disastrous - imagine getting a call from the bank saying someones just thumped all your savings and now the cops are at the door because there is a warrant out for your arrest because someone has assumed your identity.

Scary stuff........planted right there ever so innocently in your flashlight.

Now I'm wondering what else is being used to collect my data!!!!!!!!

originally posted by: Majestic Lumen
a reply to: Meldionne1

posted on Oct, 19 2014 @ 01:35 AM
link
Well...to be safe I uninstalled my Flashlight app...but I think a factory reset is a bit much. There are a number of antivirus software apps that should be able to remove malicious intrusions.

And I can't help but point out that on the website the report mentions...there is a plug for a 'safe' flashlight app...paranoid?... perhaps but I think I will just stick to my little pocket LED flashlight.

posted on Oct, 19 2014 @ 02:31 AM
link
Simple solution: If you're going to use an app, especially if it's a common simple app. Look up a how to of how to make one online... there should be one laying around. Then make it yourself, that way you won't have any hidden code floating around.

posted on Oct, 19 2014 @ 02:33 AM
link
Hmmm funny you should mention this. All of a sudden my flashlight app went nuts this week...the same day POODLE hit the networks. Started turning itself on (I assumed I somehow forgot to disallow auto-update or something) but couldn't find that option, so I uninstalled it. Hope that was enough. At least I don't keep any important information on my phone, but even still this is annoying as hell. Damnit. And damn these people who exploit everything. Sick of it.

originally posted by: Meldionne1
Can't get video to play...do you know which apps -by name -they are?

The one name mentioned was Brightest Flashlight, which was #2 in popularity.

It's a crazy old world these days when we expect every damned app to be watching, listening and/or rewriting the system on our phones.

I needed a flashlight app a few weeks ago and went through a dozen before settling on 'Tiny Flashlight LED.' Even then, it wanted permissions that a torch doesn't need! It won out by requiring fewer permissions than the others.

That's about where we are now huh? We're not complaining that so many apps require invasive permissions, we're down to accepting the least intrusive. 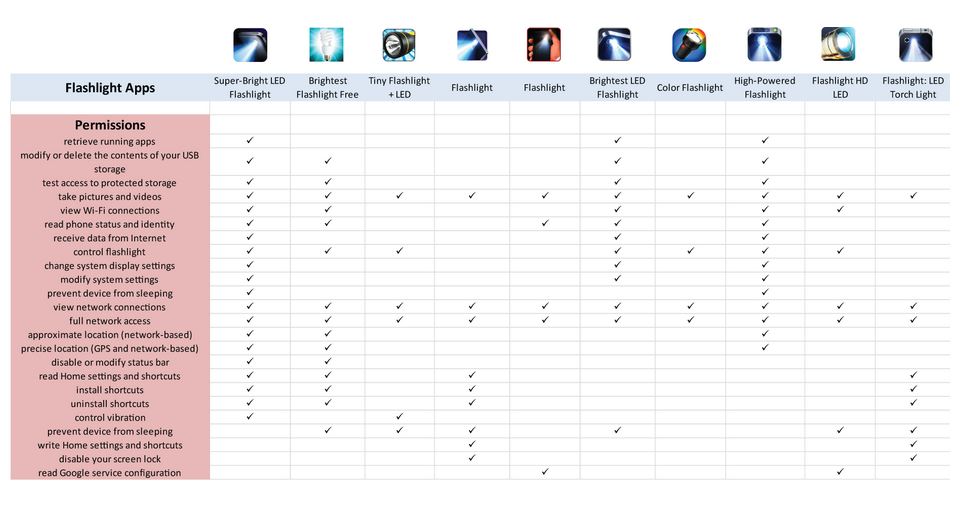 The 'Tiny Flashlight' permissions need to include access to camera/video because it uses the flash. It needs internet access because it has ads so it's not as bad as it looks. That and 'Color Flashlight' have the least permissions.
edit on 19-10-2014 by Kandinsky because: (no reason given)

lol. and people make fun of me because i don't want to carry a stealing tracker aka cell phone.

thanks for the info , i'll pass it to my family and friends that love their stealing tracker.

posted on Oct, 19 2014 @ 03:03 AM
link
Pr just carry a little flashlight and save your phones power.
Sometimes using a tool designed for the job saves a whole lot of hurt.

It's bad enough using this blasted (wi-fi)Kindle.It's an advertisement tablet,good for little else.

posted on Oct, 19 2014 @ 03:56 AM
link
"No apps no pain" as John Lennon used to sing. I wouldn't know one, how to find one, what to do with one, or why someone would ever download one into their phone if it came up and bit me on the app. Phones are for, ah, phoning someone, or having someone phone you. I text sometimes, but that's just a 21st century highfalutin new-age telegram.

originally posted by: Kandinsky
a reply to: Snarl

I find it hilarious that some of those so called flashlight apps don't even get permission to use the flashlight.

Almost every popular app takes personal info from you no matter what it does. I've learned to read the permissions and only use the apps that are truly free.

I did a thread on this exact situation some months ago. I had never seen anything about such apps before I made my own discovery about such apps. I was curious about, first, why there were so many free apps for that same feature, and why the agreement contract was so extensives. All you have to do is to closely read the fine print of the contract that you must agree upon when downloading the app.

You should suspect that ANY free app and some you need to actually buy are after your data. The app that I had briefly for a flashlight said that the company (probably a shame company) had the power to turn on my camera and mic at any time, even when the phone was OFF!

If you look into the myriad of "free" compass downloads and similar apps also, you will find the same sly tactics. It is safe to say that everything that you put or gets put on your electronic devices communicates personal data to some other(s) collection points.

You need only one rule: We are at their mercy. WE allowed it when we did not raise up strong enough when the innocuous cookies first starting appearing on our computers back in the early days of the internet. Had we raised enough hell about the invasion of our privacy then, we could have stopped this madness. But the con job was allowed by government and now it is the biggest benefactor or our personal info of all types. We are watch, classified, controlled and, thus, owned.