posted on Oct, 18 2014 @ 10:44 PM
link
This is kinda freaky, ATS. A scientist named Piotr Naskrecki is taking a nightime walk in the rainforest of Guyana whenhe comes across something crawling around in the grass. That something is a Goliath birdeater, a spioer whose legs can be as long as 1 foot. Yikes!


Known as the South American Goliath birdeater (Theraphosa blondi), the colossal arachnid is the world's largest spider, according to Guinness World Records. Itsleg span can reach up to a foot (30 centimeters), or about the size of "a child's forearm," with a body the size of "a large fist," Naskrecki told Live Science. And the spider can weigh more than 6 oz. (170 grams) — about as much as a young puppy, the scientist wrote on his blog. [See Photos of the Goliath Birdeater Spider]

Some sources say the giant huntsman spider, which has a larger leg span, is bigger than the birdeater. But the huntsman is much more delicate than the hefty birdeater — comparing the two would be "like comparing a giraffe to an elephant," Naskrecki said.

Just thought I pass this along...What does ATS say

your link comes right back to this thread

posted on Oct, 19 2014 @ 12:34 AM
link
What an awesome pet. You thought people were scared of your doberman at the dog park? Just wait till I walk my pet spider named Rover!

posted on Oct, 19 2014 @ 12:56 AM
link
Whats weird is that I saw this posted already once today too, but this seems to be a different thread and I can't find the old one. weird.

originally posted by: SpaDe_
If I saw that thing in the wild this would be a pretty accurate description of my response:

HAHAHA yep, about sums it up for me, as well!

posted on Oct, 19 2014 @ 01:06 AM
link
something fishy going on here, google says this thread is 23 hours old, but the time stamp is today at 8:44.
I just think this is a weird discrepancy, why would it be 23 hours old if it was posted hours ago. And I remember the
thread from like way earlier.

But uh, ya, big spider so uh look out.

Oh, and for future reference. Always check the source people! 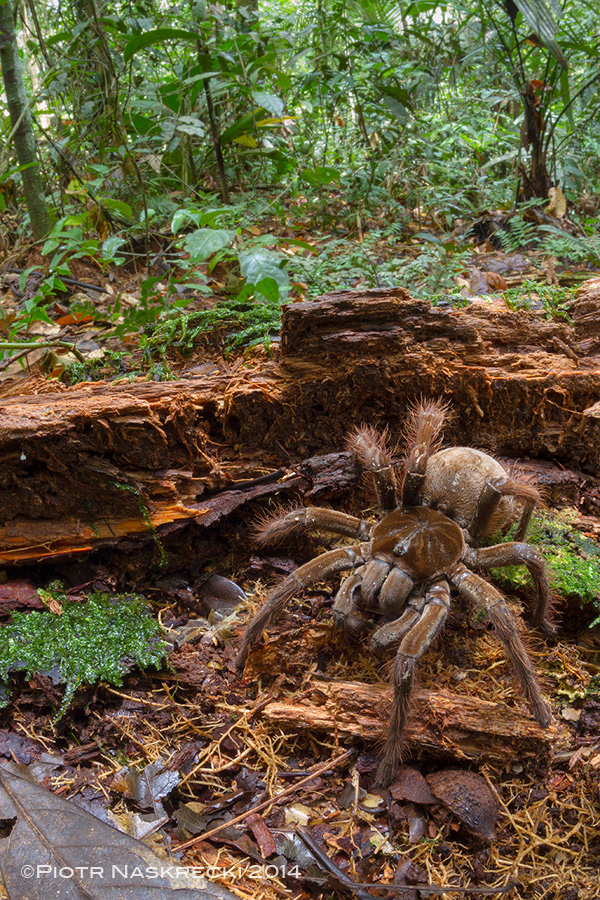 That just excites them.
We must sacrifice animals and virgins to our new 8 legged god.


Amen to THAT. I'm going to quiver and twitch all day now...

Can't help but wonder how long it takes to grow to this size.

Could make for a new food source. Let it clean up a bunch of mice and then chow down.

Don't laugh, have you ever taken a good look at those crabs very one loves so much?

Nasty-looking thing! Spiders that big, though......I can see in a rainforest. Try one that size, give or take, in FLORIDA! Saw one, about 10 or so inches across. Looked like a wolf spider, NOT a tarantula, too. My oldest lived in a place for a while, in Land O' Lakes, that was simply infested with wolf spiders, and some were BIG. Well, they seemed big till I saw this one. She'd been telling me she had a huge one there, but thought she was exaggerating. Then I saw one about 5-6 inches, and said, "Oh, that's your big one!" "No, that's not it.", she responds. Then we heard rustling in a corner, where some cardboard boxes were stacked, and up the wall the monster came! I about died right there. I actually hit that sucker with the end of a two-by-four, dead on (thrown), and hard, judging from the noise. Was it hurt? NO! The nasty thing reared up and actually made a chittering sound at us! NEVER heard of a spider making noise, but this one did. We left. So, I can believe the "monster spider" stories, especially with ones like the Goliath known to exist! If they can be that big, so can others. 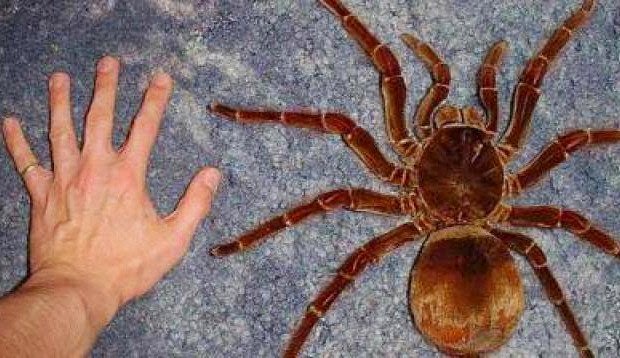 Despite its name, the birdeater doesn’t usually eat birds, although it is certainly capable of killing small mammals. “They will essentially attack anything that they encounter,” Naskrecki said.

The spider hunts in leaf litter on the ground at night, so the chances of it encountering a bird are very small, he said. However, if it found a nest, it could easily kill the parents and the chicks, he said, adding that the spider species has also been known to puncture and drink bird eggs.

The spider will eat frogs and insects, but its main prey is actually earthworms, which come out at night when it’s humid. “Earthworms are very nutritious,” Naskrecki said.

Birdeaters are not very common spiders. “I’ve been working in the tropics in South America for many, many years, and in the last 10 to 15 years, I only ran across the spider three times,” Naskrecki.

After catching the specimen he found in Guyana, which was female, Naskrecki took her back to his lab to study. She’s now deposited in a museum.

Naskrecki didn’t specify whether the spider was kept alive or not, only that she “remains in Guyana where she was collected, where she serves the purpose of training and educatiing conservation biologists, including members of native indian communities in the country.” He plans to address questions about the spider in a post on his blog.
www.thecollectiveint.com...

that would depend on if we are talking jack Russel puppy size or bull mastiff puppy size .....

I did it because I was afraid to do so.

Now, I'd not even think twice. Been there, done it. Do NOT need to do it again