US Deficit lowest since 2007

Continuing his efforts at deficit reduction, the president continues to succeed. We can't pay the debt until the deficit goes away. This might even become a deja vu moment from the late 90's, we start running a surplus, a Republican gets elected and we go right back into deficit. We'll see.

Well, now we know why the us robbed Russia in malta and cyprus. That must have been a huge sum.

This just means that the USA is not overspending as much as it had.


And that is projected. Like, I can swear I'll cut back , too.

We're only a half trillion behind on exports.

Maybe that's because we haven't been buying near as many items that used to be manufactured here in the states and are now made at overseas factories. So, we have less money to buy imports with because we've got fewer real jobs and less income to buy stuff with.

Of course the article sites trolls and naysayers throughout the entire thing.
That's probably because anyone with any sense can see the game being played here.

How are we going to buy stuff when we are all broke?

We haven't reduced the deficit so much as not kept up with overseas purchasing.

posted on Oct, 18 2014 @ 05:49 PM
link
a reply to: Benevolent Heretic Employment up? I think not. !00 million people, fully one third of our work force, are unemployed. Just more manipulation of false statistics to keep the peoples head in the sand. Housing prices being up is not a good thing, as we already pay far more than they are worth, and the main purchasers of housing are investment groups, not individual homeowners. The economy is not slowly improving.

Congrats for posting it.

I bet you'll find that this will be belittled in favor of the National Debt, instituted by Reagan, boosted by GWB.

But, thanks for sharing the good news!

originally posted by: Benevolent Heretic
a reply to: links234


Yea, and my medical coverage is going up in 2015, milk is up, beef and chicken are up and no pay increase in sight. gas is down though!

Did the trade deficit change?

Are we exporting more?

If you think home prices don't affect the economy, you really really need to take a basic economic course.

And you're quite simply either wrong or being deceitful on the "investment groups not individuals" bit. Prove it.

While you're at it, care to provide evidence for "false statistics"? How about your unemployment numbers?

How many of those jobs were lost to corporate offshoring?

Yeah thank goodness for the Do Nothing House and the Party of No, that have repeatedly jeopardized our international standing with their government shutdown antics.

posted on Oct, 18 2014 @ 06:09 PM
link
This is great news! Now we can take better care of the extra millions on food stamps, public housing and the unemployed or under employed. Time to take care of business in our own back yard.

I'm sure the money we have saved in not investing in maintenance and infrastructure will play a roll. And the money we saved on CDC funding, really what could possibly go wrong.
edit on 18-10-2014 by LDragonFire because: (no reason given)

posted on Oct, 18 2014 @ 06:50 PM
link
a reply to: Gryphon66 Home prices are an artificial inflation created to keep americans always in debt. But yes, they do affect the economy. Individual homeowners are having a harder time now buying houses as loan requirements are stricter than they have ever been....but in the meantime house flippers and investors for rental properties have been buying up foreclosures like mad....all while there are millions of homes being held in foreclosure by the banks but off the markets to keep home values artificially inflated. I don't feel like looking up the statistics for that right now. We all know the false statistics put about for "unemployment" and such, but my unemployment numbers come from the department of labor which stated that as of august, 90,000,000 of age, non institutionalized americans (not in jail, military, etc) were not employed, nor looking for work, and that another 10,000,000 were not employed but ARE looking for work (that second group makes up our official "unemployment rating") which equals 100,000,000 of our 250,000,000 work force, or roughly more than 1/3. See, the "false statistic" is the official unemployment rate, which makes it seem like 95% of working age americans are employed. This is obviously not the case. And, yes, a lot of those jobs were lost to corporate offshoring.....what does that have to do with it? That offshoring is another beef of mine, and youll get no arguments from me there. My point is.....the economy is NOT improving, any thing they say to that affect are lies, and they have been telling the same exact lie EVERY SINGLE MONTH since the actual collapse happened in 08. I don't understand why I always get people saying "but this time I think they are right".....they have been wrong about 72 times now.
Ha, that #s funny!

One more thing. The banks have been continuing the same MBS swap fiasco that landed us in the first collapse in 08.....so that will be bursting at some point too, and likely soon, and likely worse than the last one and not fixable by the same garbage QE that we tried last time and will not be able to afford this time. So I wouldn't start resting on our laurels just yet.
edit on 18-10-2014 by pexx421 because: (no reason given)

Yes the spending deficit is down.

But the total National Debt keeps ticking up like mad. 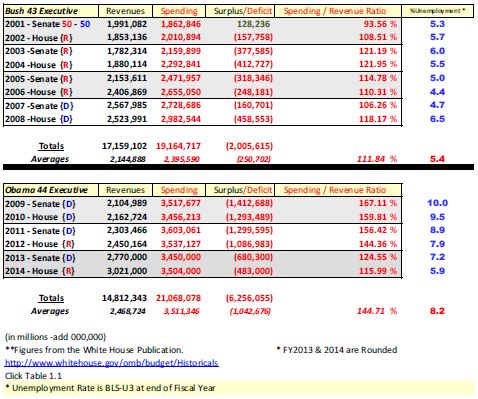 According to your graph it was a really bad idea to cut taxes. And start two wars.

Thanks Xuenchen. I hadn't known how much the spending/revenue ratio fell when the Republicans got the House. It seems as though people are saying that Obama reduced the deficit, when it may very well have been the Republican house that did it.

It seems as though bringing up the deficit makes Bush and the Republicans look very good, and Obama and the Democrats very bad.

Thanks to the OP for exposing another Obama failure, and the folly of having Democrat control of all three seats of power.

Both crap parties owned by lobbyist and corporation.