Well he could use it the real proper way, which is to sit facing the back of the toilet so you have a little tray for your comic book and chocolate milk....

I knew a guy once, meat head, who would sit to pee. We caught him one drunk night when he left the door open. My buddy walked in and was like "oh sorry, didnt know you were taking a dump", to which this guy replied, "nope, just pissing.". We asked if he always does that and he said yes.....

Some people do the most absurd things sometimes.

He probably saw the south park episode. I know I thought about it before.

It's the most up-to-date version of Doc Browns time machine. It runs on waste and in the privacy of a stall you don't have to worry about witnesses. The flush capacitor is a recent installment. You're right about too many buttons.
edit on 17-10-2014 by WakeUpBeer because: (no reason given)

How very correct . Worked in Darwin a few years back Ans stopped in backpackers hostel until settled . I couldn't work out why the seats had pee on them every time i went ,then it was explained to me . Still i cant say much as i was mortified the first time i was showering and heard a female singing in the shower next to me . Slunk out only to find out later the showers were unisex .

originally posted by: intrptr
a reply to: Domo1
The West Coast absorbed refugees from Vietnam when Saigon fell in 1975. Famously referred to as "boat people" here, a lot of them were turned loose in the city of San Francisco. Those that spoke english were trained for jobs in Silicon Valley and some of them wound up at a nameless company I worked at. One day a lady broke her leg in the bathroom stall and everyone was tripping how that would even be possible when it was explained to us she had fallen while standing up on the rim to pee.

She had never seen a toilet before coming here was the claim and sadly, no one had taught her after she arrived.


My parents took in several Vietnamese boat people who came to Canada in the 80's. They always complained about how cold they were when they slept. It was odd because they were very tough people used to extreme hardships. My mom kept on giving them more and more blankets until it exceeded ridiculous. Then, somehow, she got the bright idea to get them to demonstrate how they were using the blankets. Turns out they were putting them all on the bed and then sleeping on top of them. My mom actually had to demonstrate getting under the blankets while they kind of had a look of bewilderment on their faces. Apparently they don't do that Vietnam.
edit on 18-10-2014 by CraftBuilder because: I smell really, really good!

posted on Oct, 18 2014 @ 12:03 AM
link
This made me think of the South Park episode where Butters learned he had been sitting on the toilet backwards his whole life. He said that he thought it made sense, since you had the little shelf for your comic book and your chocolate milk. I suppose that if you want to have a snack while on the toilet, then it does make sense, lol. Honestly I cannot believe that the guy didn't realize this. I've sat on the rim accidentally before, not realizing the seat was up, and besides being uncomfortable it doesn't fit your bottom correctly. So unless he was a bigger guy, I don't see how he didn't realize this at some point. Especially when he was a child. How did he keep from falling in? I would say this is common sense, but common sense is not "common" to everyone, and it is dependent on one's personal experiences. So he was never corrected, for whatever reason when he was a child, and he has just been doing it wrong ever since. Humans never cease to surprise me.

posted on Oct, 18 2014 @ 12:07 AM
link
Lol! How some people can go through life not knowing how to preform simple day to day functions, like using the toilet properly, is beyond me. Didn't common sense ever kick in!?!

The thought of sitting on the toilet rim is so disgusting

Normal because that's how you choose to do it... its also absoloutly normal for a vast majority to stand and wipe aswell. .

originally posted by: Grimpachi
a reply to: Domo1


Is this one cultural because it confuses me..err..well its kinda scary.

It looks like a joke I heard long ago. (Of course a man walks into a bar..)

off the street & asks the bartender if he can goto the bathroom. "Look I'll spot you a fiver man, I gotta go!"

Well, ok but you'll have to use the woman's bathroom, the men's is being remodeled.

Fine, fine. As he moves the guy shouts at him "Whatever you do, don't hit the red button!"

As he opens the stall door he sees (something very much like this photo) a john with buttons on it.

He does his business, and decides what all men would do, "What does this do?"

As he finishes he hits the green button & a mechanical hand comes up & wipes his arse.

He hits the second button, and another arm comes out and sprays a fine misty perfume between his legs.

About this time another man walks in to throw down a few when he hears the most bloodcurdling scream he's ever heard.

"what the bloody hell was that, someone getting killed back there?!" he asks.

"Nah, says the tender, "that's just some guy in the woman's bathroom hitting the red button like I told him not to."

"Well what's the red button do?"

Standing seems to be a well known problem. 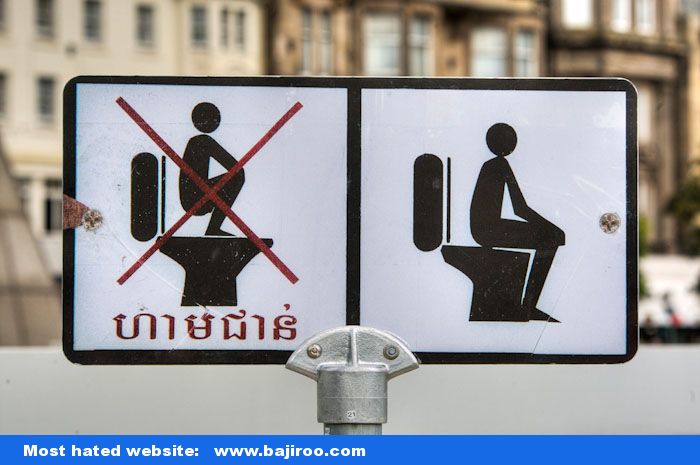 …the first time i was showering and heard a female singing in the shower next to me. Slunk out only to find out later the showers were unisex .


Thats my kind of hostel. Sounds like a missed opportunity? She was singing to you…

It does look like a joke but there seems to be a market for those things. That one is kind of scary but this one is terrifying. It has a freakin remote it would be great for gags but someone in another room thinking it was for the tTV could really ruin your day.

posted on Oct, 18 2014 @ 01:35 AM
link
One of my sons can sit on the john, doing his business, while eating with a plate on his lap! In one end and out the other, lol. Someday he will finally realize he's been doing it wrong. I hope.

How do you wipe your butt whilst sitting?

There's enough germs on a toilet seat let alone a public gadget with buttons connected to it! I can imagine the number of guys who peed on this thing.


This all, though, reminds me of a story about my mom.

We went camping in Michigan (we lived in Indiana) when I was about 10. We stopped on the way to the campground at a little hole in the wall restaurant, where a lot of truckers stopped.

We ordered some food, and, while waiting for it, my mom gets up to go to the bathroom.

Food came, and my dad and I started eating, when my mom came hurrying to the table and told my dad that we had to go, right now.

Just then, 2 big truckers came walking by, laughing their butts off and watching my mother as she stammered and was all red-faced.

My dad said, "Shirley, what did you do?"

Turns out she had gone into the boys room and was using one of the urinals there when these truckers came in to go.

Yeah, we lived a state away. They make bathrooms a lot different up there in Michigan. LOL