This report of a Mag 12 earthquake in West Africa popped up this afternoon. Do your stuff, ATS, and take it apart...I don't want this to be real.

wouldn't everyone on the planet feel a 12?

butcherguy
+6 more
posted on Oct, 17 2014 @ 01:50 PM
link
a reply to: caitlinfae
Unless I am mistaken, there has never been an earthquake of that magnitude recorded.

That's why I think it must be a mistake...I'm surprised it even registered as that. Very very odd.

I can only assume its actually a 1.2... and some idiot blew it way out of proportion

Where's the USGS info on it?? 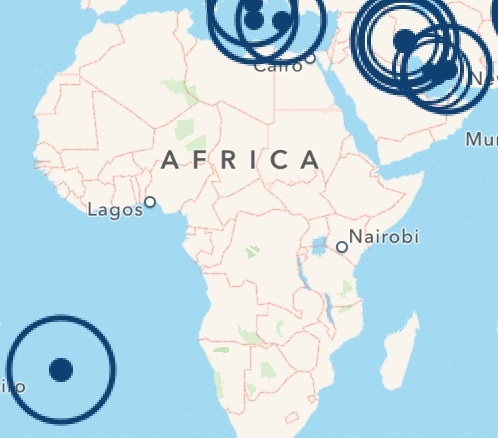 posted on Oct, 17 2014 @ 01:53 PM
link
Maybe the USGS doesn't know it happened yet. Maybe they will discover it in January. Or maybe this guy is making it up. You know, the CDC and US government aren't the only ones that can make things up.

I just checked my local webicorder, and it looks normal.

If there had been a 12 , 4 hours ago I would expect the webicorder to be bonkers (to say the least!)

IMO this is a hoax.

Something crashed into the monitoring equipment?

posted on Oct, 17 2014 @ 01:55 PM
link
If there was a mag 12 quake anywhere on the planet, we'd have it verified by now. That's hard as hell to hide -- seismos would be going insane globally, not to mention it would be felt across an enormous area -- remember how far the Fukushima/Tohoku quake was felt? Over a thousand miles, if I recall. But before all human reports could be made and hit the news, the seismos would be off the charts & people all over the place would be talking about it. That's hard ti hide from all the private seismos, and beside, True American would be blowing up the forums alongside Muzzy & Puterman.

2 things are to blame. Miscalibration of something somewhere (human error) or outright lie that never happened.

Edit: GEE is indeed showing quiet, normal graphs, from Ascension Island to Russia to everywhere in between. This epic quake never happened, there would still be telltale evidence of a quake of that magnitude rippling through this rock after 4 hours if it had.
edit on 10/17/2014 by Nyiah because: (no reason given)

originally posted by: FlyersFan
I'm going with HOAX on this one. Nothing on the earthquake reports. And if there was a 12.0 in West Africa, we'd be on Tsunami watch on the East coast USA. We aren't.


Look at the link I provided please people...it verifies a 12 mag earthquake several hours ago in Africa!!

hmm... i see an angry little man in that video link
i think that's all i needed to see?
maybe he's one of joetalks subsidiaries?
wake me when the tsunami's about to hit

originally posted by: FlyersFan
a reply to: thesmokingman
WOW. It's there alright.
But it's gotta' be a mistake.


I agree would HAVE to be a mistake. That far off the coast would surely cause a tsunami.