China's Banks Are Getting Ready For A Debt Implosion

Chinese banks are seeing the writing on the wall in terms of the debt they've accumulated, and they are taking measures to protect themselves.

The Bank of China is planning the biggest sale of shares ever — $6.5 billion to offshore investors, Bloomberg says. It's all in an effort to create a capital cushion.

China's banking system has piled up the most bad loans of any time since the financial crisis, and the banks are preparing for the moment those debts collapse.

Especially in corporate and property sectors, things are looking dire.


China's Banks Are Getting Ready For A Debt Implosion

Ya know it's funny but I had come to think of China as the number 2 in the worlds financials markets.
I mean they did buy up a lot of bad stocks and bonds they just bought that hoittie-tottie hotel in NYC.
but I guess that was all hype to make themselves look better.

But that — coupled with the March collapse of Zhejiang Xingrun Real Estate Co. under $571 million in debt — has investors spooked.

they say China's producer-price index has fallen 6.7% in the past 36 months. I'm not a big shot money guy but I know enough about the markets to say... this looks bad...esp right now with everyone worried about the European economy...might even be bad as our own 2008 meltdown???

this is one story to keep an eye on folks

posted on Oct, 17 2014 @ 11:15 AM
link
China has made a lot of bad decisions in purchasing things. Like buying a trillion dollars of the United States bonds. That is like buying stock in a ponzi scheme.

Guess that puts an end to their hope of replacing the US dollar with their own Yuan as the new currency standard too..

Oh well, maybe prices will drop enough so I can buy me one of those new 70 inch HD TV for the chance I have in my pocket...

posted on Oct, 17 2014 @ 11:29 AM
link
This is all very similar to what Japan did 25 years ago with trying to spread its debt risk into real estate and other investments.

It seems like people think they can succeed at something others failed at in this world. They think they are better salesmen. Selling deceit is very popular and profitable nowadays.

I just checked at the Yuan is 6.12 per USD... right now the markets are closed over there but it looks like the SSE had a rough up and down day... can't wait to see what happens when they open again in a few hours.
Shanghai Stock Exchange

originally posted by: HardCorps
I just checked at the Yuan is 6.12 per USD...

Take the Yuan to Dollar ratio with a grain of salt, China has been rigging their currency for decades to support the illusion of double digit growth. They are due for a financial reset that will rival the one we had in 2008, it may even be worse.

I'll have to hunt up a link for the story...
but I remember reading a report on Aug. Exports in China were there highest levels... yet money earned from those exports was pitifully low.


Anyone bracing for Federal Reserve rate hikes or a Japanese bond-market crash clearly isn't considering the deflationary currents coursing through the world's second-biggest economy. I'm not referring only to today's news that producer prices in China fell for a record-tying 31st month in September. Evidence is mounting that consumer prices are on a similar trajectory as exports wane

What they do not openly tell you is that China is using it massive liquidity to subsidize material costs so that finished good prices can be continually lowered. In many cases the raw material price factor they are using is below the world average which should really make you question how they arrived at the price.

They are mortgaging their future by using their past profits.

originally posted by: ThichHeaded
Dont China have an ass ton of gold?

when you talk about 'Deflation' it means that value of everything drops.... costs of goods and services, of exports and imports, raw materials and finished goods... the price of everything falls including the value of gold.
if their market does implode having an ""ass ton of gold"" is not going to help them buy there way out of anything.

posted on Oct, 17 2014 @ 12:33 PM
link
So even if their money goes to crap they will still be rich because well... They have all the things and well we will be still stuck wit the dollars as toilet paper.. Think Denmark I think or Zimbabwe..

About the gold not worth anything.. ya.. no.. for millions a yrs gold has been used as currency for humans for since forever.
edit on 10/17/2014 by ThichHeaded because: (no reason given)

yeah but if China started to flood the world markets with all there gold to prop up their nations economy... then the market value for gold would plummet... making it less valuable and causing them to need to sell off more gold which drops the price all the lower ...

if you look at the 10yr you see gold prices hit their peek back in 2011 and been falling...slowly.. but steadily.

Plus if we ever did see a real economic collapse.... you could have a truck load of gold... but my box of 12ga shotgun shells will have way more value as a trade item.

posted on Oct, 17 2014 @ 12:53 PM
link
Ya I agree with you on the guns and things.. I am just saying they have it.. even if the prices of an oz of gold is say 50 dollars they have tons and tons of it so it really wouldn't matter.. They can literally f*ck the rest of the world so to speak.. Kill all this fiat money and force countries to use real sound money..

In actuality that doesn't sound half bad really.. We wouldn't be working for slave wages then..

But if it did end up like that.. You should probably learn to make your gunpowder and or make arrows for a bow because the last depression lasted 10 yrs.

originally posted by: ThichHeaded
Ya I agree with you on the guns and things.. I am just saying they have it.. even if the prices of an oz of gold is say 50 dollars they have tons and tons of it so it really wouldn't matter.. They can literally f*ck the rest of the world so to speak..

Just how much Gold are you imagining China having? 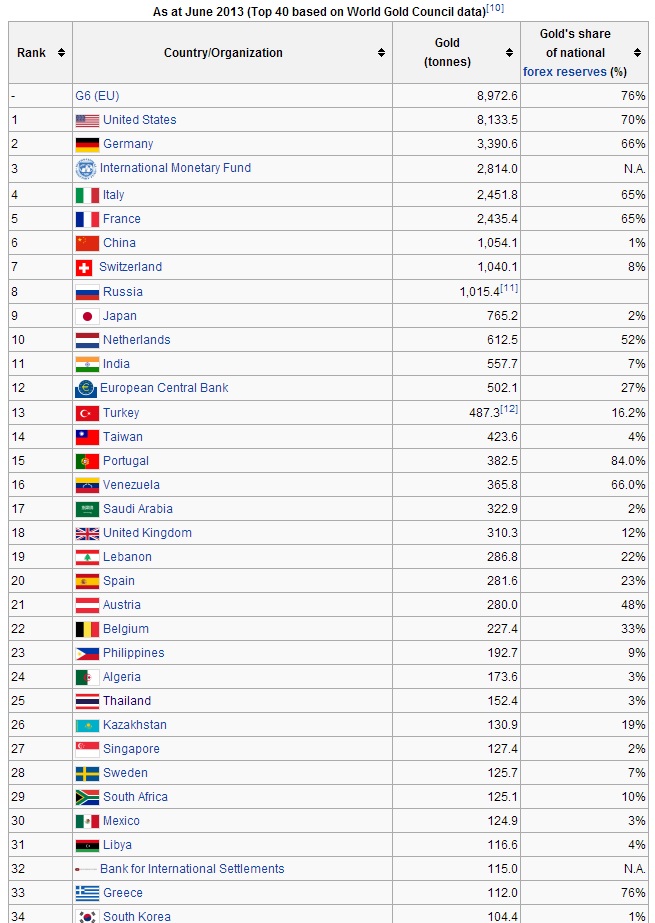 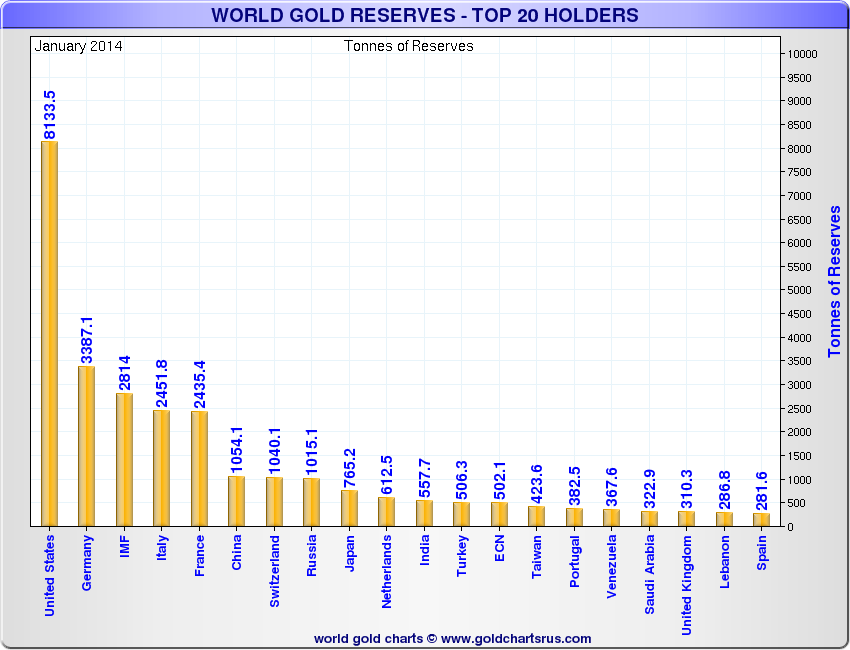 Even if China were able to triple it's known Gold reserve that would put them in third place, ahead of the IMF but behind Germany. If they were able to somehow quadruple their reserve that would put them just a hair ahead of Germany and be in second which would still be at about half of the US.
edit on 17-10-2014 by SLAYER69 because: (no reason given)

They aren't stupid.. They own most of the US and we willingly give them money freely.. Just saying..

I forget which site I'm on sometimes but I do appreciate your sentiment. If China were able to somehow buy and put away the amount you're suggesting they have people would taken notice a long time ago. Large Gold purchases would be a sign that things were moving and is looked out for.

This is all very similar to what Japan did 25 years ago with trying to spread its debt risk into real estate and other investments.


The Japanese were in the same situation that the Chinese are in now. The Japanese worked hard to manufacture and mass produce billions of Yen of exports; electronics, TV's, music players, memory chips. They were successful, perhaps too successful, because once they had billions of Yen pouring in they had to do something with that money, otherwise it is just devalued rapidly through inflation. So the Japanese invested in new high-rise office blocks, leading to more demand for apartment blocks and houses and economic growth. Even after all that construction work, they still had money left over, so they bought up property everywhere from California to New York. But the USA had a recession too - that caused those properties to make a loss. Those Japanese corporations went bankrupt, had to sell off all that property, and since they were multi-national, the recession spread like a virus and hit Japanese cities as well. The whole country ended up with a property crash with corporations going bankrupt, leading to a chain-reaction through the whole economy.