Now, before getting into the details of all that, let's go to the famous Daniel 9 70 weeks prophecy.


23 At the beginning of thy supplications the commandment came forth, and I am come to shew thee; for thou art greatly beloved: therefore understand the matter, and consider the vision.
24 Seventy weeks are determined upon thy people and upon thy holy city, to finish the transgression, and to make an end of sins, and to make reconciliation for iniquity, and to bring in everlasting righteousness, and to seal up the vision and prophecy, and to anoint the most Holy.
25 Know therefore and understand, that from the going forth of the commandment to restore and to build Jerusalem unto the Messiah the Prince shall be seven weeks, and threescore and two weeks: the street shall be built again, and the wall, even in troublous times.
26 And after threescore and two weeks shall Messiah be cut off, but not for himself: and the people of the prince that shall come shall destroy the city and the sanctuary; and the end thereof shall be with a flood, and unto the end of the war desolations are determined.
27 And he shall confirm the covenant with many for one week: and in the midst of the week he shall cause the sacrifice and the oblation to cease, and for the overspreading of abominations he shall make it desolate, even until the consummation, and that determined shall be poured upon the desolate.

Did you know that Jesus refers to this prophecy, and moreover, refers to Himself coming again at the end of the 70 weeks? And let's be clear, Jesus refers to 70 weeks as in 490 days- not 490 years! Jesus is not talking about Cyrus this, 434 BC that. Literally 70 weeks.
Serious prophecy students are surely shaking their heads in disbelief, “He never said anything about Daniel 9's 70 weeks!” Let me show you. And as an added bonus, the 70 weeks prophecy actually forms a backbone for understanding the sequence of events in the book of Revelation.

Let's get right to where Jesus mentions the 70 weeks, and you've probably seen the passage a 100 times...

14 And this gospel of the kingdom shall be preached in all the world for a witness unto all nations; and then shall the end come.
15 When ye therefore shall see the abomination of desolation, spoken of by Daniel the prophet, stand in the holy place, (whoso readeth, let him understand)
16 Then let them which be in Judaea flee into the mountains:
17 Let him which is on the housetop not come down to take any thing out of his house:
18 Neither let him which is in the field return back to take his clothes.
19 And woe unto them that are with child, and to them that give suck in those days!
20 But pray ye that your flight be not in the winter, neither on the sabbath day: 21 For then shall be great tribulation, such as was not since the beginning of the world to this time, no, nor ever shall be. 22 And except those days should be shortened, there should no flesh be saved: but for the elect's sake those days shall be shortened.
23 Then if any man shall say unto you, Lo, here is Christ, or there; believe it not.
24 For there shall arise false Christs, and false prophets, and shall shew great signs and wonders; insomuch that, if it were possible, they shall deceive the very elect.
25 Behold, I have told you before.
26 Wherefore if they shall say unto you, Behold, he is in the desert; go not forth: behold, he is in the secret chambers; believe it not.
27 For as the lightning cometh out of the east, and shineth even unto the west; so shall also the coming of the Son of man be.
28 For wheresoever the carcase is, there will the eagles be gathered together.
29 Immediately after the tribulation of those days shall the sun be darkened, and the moon shall not give her light, and the stars shall fall from heaven, and the powers of the heavens shall be shaken:
30 And then shall appear the sign of the Son of man in heaven: and then shall all the tribes of the earth mourn, and they shall see the Son of man coming in the clouds of heaven with power and great glory.
31 And he shall send his angels with a great sound of a trumpet, and they shall gather together his elect from the four winds, from one end of heaven to the other.
[...]
36 But of that day and hour knoweth no man, no, not the angels of heaven, but my Father only.
37 But as the days of Noah were, so shall also the coming of the Son of man be.
38 For as in the days that were before the flood they were eating and drinking, marrying and giving in marriage, until the day that Noah entered into the ark,
39 And knew not until the flood came, and took them all away; so shall also the coming of the Son of man be.

What's the “winter / sabbath” and then Great Tribulation? It's not Hanukah, it's the 10th of Tevet (about 15 days later).
The 10th of Tevet is the day when Babylon / the king of the north surrounds Jerusalem with armies. These armies are the "abomination of desolation". Here is the parallel verse in Luke 21

20 And when ye shall see Jerusalem compassed with armies, then know that the desolation thereof is nigh.

Historically, the armies started cutting off the food supply (and also the source of animals to be sacrificed) to Jerusalem, which culminated in the sacrifices being stopped at 17 Tammuz (July-ish). This action started at 10th of Tevet (and is the true beginning of the 1290 days of Daniel, but that is another post).
Ezekiel 24:1-14  Again in the ninth year, in the tenth month, in the tenth [day] of the month, the word of the LORD came unto me, saying, Son of man, write thee the name of the day, [even] of this same day: the king of Babylon set himself against Jerusalem this same day.

Now, what are the days of Noah? (Remember the "flood" mentioned in Daniel 9:26 above?)
Matt 24 again
36 But of that day and hour knoweth no man, no, not the angels of heaven, but my Father only.
37 But as the days of Noah were, so shall also the coming of the Son of man be.

36 But of that day and hour knoweth no man, no, not the angels of heaven, but my Father only.
37 But as the days of Noah were, so shall also the coming of the Son of man be.

The phrase “of that day and hour knoweth no man,” refers to Rosh Hashanah. It's a commonly discussed idea, so I will let you read here antipas.net... or elsewhere for more information.
Then it ends with Jesus saying that He will be coming in the days of Noah...
Remember how the star sign of Revelation 12 begins to occur on Rosh Hashanah 2017/ Sept. 20, 2017? 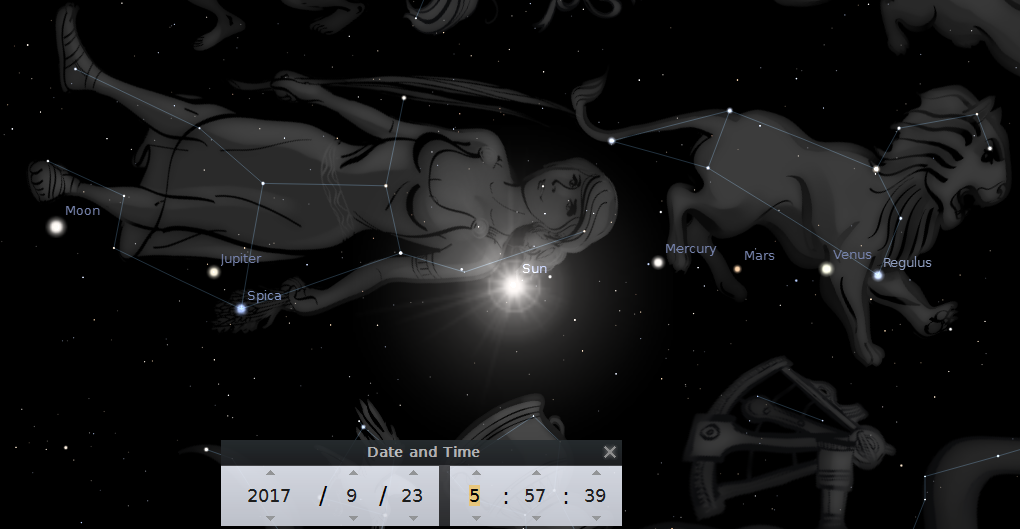 The most logical date then for the Great Tribulation to begin is thus: dusk January 7/ 8, 2017. The Great Tribulation begins, and then the outer court of the temple is given over to the Gentiles for 42 months at Rosh Hashanah 2017. And... when you overlay the information about the Daniel 9 segmentations (7 weeks, 55 weeks (62 weeks - 7 weeks); and 70 weeks), you can get an even more detailed look.
In essence, the Great Tribulation occurs in January 2017 which must refer to the 5th seal.
The 6th seal occurs around February 25, 2017 (7 weeks/ 49 days after the 10th of Tevet). The people of the 6th seal say, “the day of God's wrath has come”. This Day of the Lord is one year/ “one day” - and it is a Jewish year starting on its 1st month, Nisan. Nisan 1, 2017 (March 27/ 28, 2017) through Nisan 1, 2018 (March 17, 2018 which is also the end of 62 weeks from our start at the 10th of Tevet). The trumpet judgments are held at bay for a short while until the 12 tribes/ 144,000 are sealed at Passover, April 10, 2017.
Within this “Day of the Lord” is Rosh Hashanah when Christ returns and the temple is given over to the Gentiles (the star sign of Revelation 12, the woman goes into the wilderness for 42 months).
I will try to post more about how this relates to the book of Revelation in the future, but for now, I hope you will go through Revelation and see how this fits together.

Truly an amazing prophecy and compelling... I hope the end comes sooner rather than later so all the misery can end andeternal life can begin. Dates are more than likely correct but still to distant future for my liking.

Keep up the info.

Truly an amazing prophecy and compelling... I hope the end comes sooner rather than later so all the misery can end andeternal life can begin. Dates are more than likely correct but still to distant future for my liking.

Keep up the info.


Well, you'll notice that I only put the 5th Seal with the timing of the Great Tribulation/ January 7/8, 2017. When are the other seals opened?

I will be looking for a treaty between: the US/ Russia/ Iran/ Israel/ ISIS/ UN/ the Pope/ or Turkey. There is a very good chance that this is THE treaty to watch for: en.wikipedia.org... The deadline for ahem, "confirming" this covenant/ treaty dealing with Iran is Nov. 24, 2014.

8 And their dead bodies shall lie in the street of the great city, which spiritually is called Sodom and Egypt, where also our Lord was crucified.
9 And they of the people and kindreds and tongues and nations shall see their dead bodies three days and an half, and shall not suffer their dead bodies to be put in graves.
10 And they that dwell upon the earth shall rejoice over them, and make merry, and shall send gifts one to another; because these two prophets tormented them that dwelt on the earth.
11 And after three days and an half the spirit of life from God entered into them, and they stood upon their feet; and great fear fell upon them which saw them.
12 And they heard a great voice from heaven saying unto them, Come up hither. And they ascended up to heaven in a cloud; and their enemies beheld them.


Come, and let us return unto the Lord: for he hath torn, and he will heal us; he hath smitten, and he will bind us up. 2 After two days will he revive us: in the third day he will raise us up, and we shall live in his sight.