page: 1
29
<<   2  3  4 >>
log in
join
share:
sled735
+9 more
posted on Oct, 17 2014 @ 07:04 AM
link
I remember seeing a show on t.v. a few years ago about Ed and Lorraine Warren taking this doll from a house to store in their haunted museum.
I was fascinated by their claim that a doll could be possessed by an evil spirit; it made me wonder if some of the dolls I've seen in my childhood that gave me the creeps could have also had some type of negative attachment?

Do dolls give you the creeps? Annabelle will!! 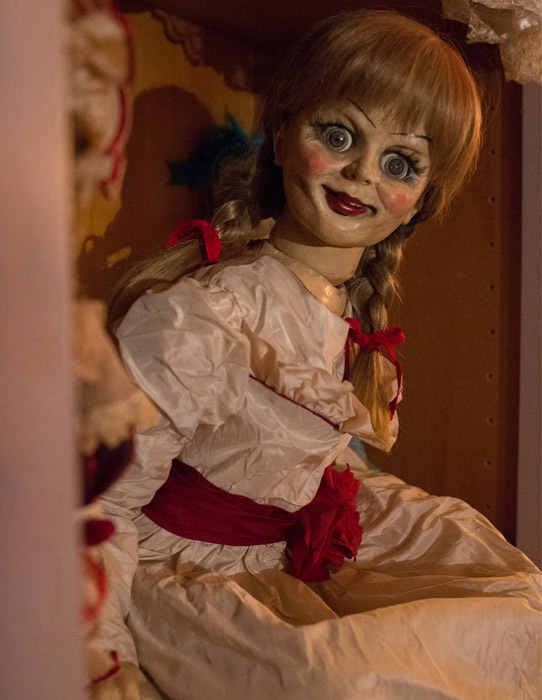 It was 1970 when a mother purchased a Raggedy Ann doll in a second-hand store as a Christmas gift for her daughter, Donna, who was studying nursing in Hartford, Connecticut. Everything was fine until Donna brought Annabelle to the kitchen table for breakfast one morning and the doll straightened out her arms and put them on the table!
From there, things really became strange. Soon afterward, Donna and her roommate, Angie, would often come home to find Annabelle on the couch, knowing they had left her locked in Donna’s room.


If they ever hold a talent competition for possessed dolls, Annabelle would sweep every category. Standing, kneeling, pivoting on one leg, levitating and even manifesting droplets of blood are only a few of her demonic gifts. At the height of her powers, Annabelle also proved to be a prolific writer, composing cryptic notes on parchment paper.

Why would anyone keep a doll that did such things?!!!
Well, according to a medium that Donna invited in to see what was going on with the doll, it was possessed by a little 7 year old girl, so Donna didn't see any harm in allowing the child to stay.

3. The Ghost of a Little Girl


After a month of Annabelle’s eerie antics, Donna decided to contact a medium. The psychic told Donna and Angie that a 7-year-old girl named Annabelle had been tragically slain on the apartment property. The child had taken residence inside Donna’s doll. Annabelle felt comfortable with Donna and Angie. The young nurses, already compassionate souls, decided that there was no harm in welcoming Annabelle into their home.

Donna and Angie, would soon learn that Annabelle was not a poor little girl, but a terrifying demon!!

Read the rest of the true accounts of Annabelle here:
www.channel24.co.za...

Still, today, Annabelle remains inside a glass case in the Warren's museum where she can't do any harm.

any evidence that any of the above claims are true - PS - it doesn't help that the tail is not even internally consistent :

Still, today, Annabelle remains inside a glass case in the Warren's museum where she can't do any harm.

the claim contradicts is earlier "" abilities to escape locked rooms :

would often come home to find Annabelle on the couch, knowing they had left her locked in Donna’s room.

posted on Oct, 17 2014 @ 07:22 AM
link
Surely after all these years, someone has managed to catch something on film to validate the claims? Everyone always seems to have their anecdotes as evidence, but so rarely is anything backed up with anything beyond their word. 44 years, and nothing on this doll beyond stories? C'mon, that's plenty of time to train a camera on the doll and catch any little thing they claim she does.

Have you ever watched Haunted Collector on t.v.? He takes items that have spirit attachments from people's homes and stores them under glass cases. Apparently, there is something about glass containers that traps a spirit. I don't know how it works, but this is what the pros use.

originally posted by: sled735
a reply to: ignorant_ape

Have you ever watched Haunted Collector on t.v.? He takes items that have spirit attachments from people's homes and stores them under glass cases. Apparently, there is something about glass containers that traps a spirit. I don't know how it works, but this is what the pros use.


Photons can get through glass, but a spirit that can get through solid objects cannot? This makes no sense at all, considering everything people claim they have penetrated, from cloth to stone to metal (vehicles included)

posted on Oct, 17 2014 @ 07:30 AM
link
In the 1990s my sister swore that a doll she had, one of those talking ones, would constantly swear, would talk and swear at many odd moments during the day and night without being touched, so much so that she had to put it under things in her laundry room, and she eventually ended up putting it in a garbage bag (it was swearing the whole way) and handing it to the garbage collectors personally. She had said she'd send it to me, as I was interested in having this odd doll, but when I eventually talked to her by phone she said she'd gotten rid of it (I wasn't happy, darn).


We could call Elaine Warren and arrange for you to spend a night with Annabelle, how would that be?

Take her out of the case, use her as a pillow… just for one night. Any takers?

Ed and Lorraine Warren are known fraudsters. They tend to embellish and make crap up.

Ray Garton: I was offered the job, and because I used to read of Ed and Lorraine Warren's exploits in the National Enquirer when I was a kid, I took it. I went to Connecticut and spent time with the Warrens and the Snedekers. When I found that the Snedekers couldn't keep their individual stories straight, I went to Ed Warren and explained the problem. "They're crazy," he said. "All the people who come to us are crazy, that's why they come to us. Just use what you can and make the rest up. You write scary books, right? Well, make it up and make it scary. That's why we hired you."

I'd take anything THEY say with a grain of salt.

I'd say you don't know how lucky you are that she didn't send it to you.

posted on Oct, 17 2014 @ 07:50 AM
link
25 years ago I went to a lecture given by Ed and Lorraine Warren. It was very interesting. I also read their books. My sister-in-law and her husband lived in the same town as the Warrens and would see them at church (they went to the same church). I have no doubt that they have encountered a lot of supernatural entities and spooks. The thing is, Hollywood has embellished the stories and made them almost unbelievable.

The Amittyville story for example. The place was haunted and did have activity, but what Hollywood did was over the top (that's what Lorraine Warren said).

That being said, we had a haunted doll once. It as a cheapo $10 hispanic looking doll from KMart. (my daughter is hispanic and I wanted a darker looking doll for her) I bought it for my daughter when she was two. She immediately hated it. When we brought it into the house there was suddenly a lot more spook activity and bad dreams by my daughter and I. After a few weeks we got the doll out of the house and all those troubles stopped.


We could call Elaine Warren and arrange for you to spend a night with Annabelle, how would that be?

Take her out of the case, use her as a pillow… just for one night. Any takers?


Did you really expect me to say "Aw hell no"? Of course I would jump at that, and livestream it. If it moves, I own up & have witnesses. If not, someone gets to explain why the demon dolly didn't act all demon-y.


But I would take Annabelle for the night. Wouldn't worry a bit.

originally posted by: intrptr
We could call Elaine Warren and arrange for you to spend a night with Annabelle, how would that be?


Lorraine Warren still has the haunted artifacts museum. She lives in Monroe Connecticut. TV crews and reporters have been in there. I don't know if people 'off the street' are allowed in there but it wouldn't hurt to ask ...

Nah, I don't think I would have minded it. Would have struck up conversations, or tried to. My main teacher told my sister during a reading that she was the most natural psychic he'd ever met, and yelled at her in a crowded room "Get training!!", then followed her out of the room yelling it again. He knew that she would have no interest in getting training of any kind, even as low-level as talking to a psychologist, and she never did. So although she is extremely psychic she still has all of her unhandled childhood traumas/decisions, her identifications with our parents and others, her busy chattering mind, her lifelong habits, an inability to confront many images and situations, and the other things that even a few minutes of minor training/good techniques chips into. I wouldn't be surprised if this talking doll wasn't another message to her to train her abilities.

That's wild!
I just remember seeing some dolls that really sent shivers down my spine when I was young. I'm glad I didn't run in to one like Annabelle. That would send me over the edge.

If it moves, I own up & have witnesses.


Its not the doll… but what is reportedly "attached" to it. Remember I said reportedly.

You in charge of the spirit world, huh sport?

I think the pose is slightly different, and the ruffles at the neck aren't showing as much in the b/w. Seems Annabelle is getting restless sitting in the same position all these years.