GOP set to seize the Senate

posted on Oct, 17 2014 @ 01:02 AM
link
OH,,, The Dem's Must Be Pulling What Little Hair They Have Left Out Of their Heads!
And the News is Coming From Not Fox News, Oh, No, But From One Of Their Own,,, Yes, Can you believe That!
The Huff!!!
Yes, The Huff is saying there only a 34% chance that Democrats will keep control of the Senate.
There is a 66% chance that Republicans will take control of the Senate. Can you hear it,,,, Yes, their heads,,, The Groans and Moans, Their Miashia has Failed them!

About The HuffPost Pollster Model
HuffPost Pollster begins by collecting every publicly released poll on the 2014 Senate races. We then use a statistical model to estimate the trend in support for each candidate based on all the survey data, adjusting for sample size and pollsters’ “house effects.” Interactive charts of those support trends are available here and on the HuffPost Pollster home page.

By running a series of simulations (known commonly as the Monte Carlo method), the model allows us to quantify the uncertainty associated with the current polling snapshot. That uncertainty comes from multiple sources: sampling error in the polls themselves, uncertainty about the house effect corrections, and uncertainty about how quickly vote intentions are changing.

The model then calculates a “win probability” for each race that is displayed in the graphics on this page. This probability takes three factors into account:

The time remaining between the current snapshot and the election.
The possibility that the polls could be wrong or that some sort of major event could shake up a race in ways that the current polls can’t measure.
The proportion of “undecided” voters in the polls. If the undecided proportion is high relative to the expected margin between the candidates, the outcome of that race must be less certain.
Lastly, we combine the win probabilities from each race and perform another set of Monte Carlo simulations to calculate the likelihood of each outcome — giving us the probabilities of Democrats keeping control of the Senate or of Republicans taking over.

Metallicus
+17 more
posted on Oct, 17 2014 @ 01:06 AM
link
I don't think it will matter much since both parties serve the same corporate masters, but maybe they can at least slow down the damage Obama is doing to our country. Maybe.

Also its messiah not miashia.

posted on Oct, 17 2014 @ 01:10 AM
link
True, But What could it mean, Really it could mean a lot.
Unfortunately, Obama still holds the Power to Veto even if the Republicans have the Senate.

But, it could mean as this person buts it.

As the Nov. 4 midterm elections draw near, Washington is bracing for the real possibility of a Republican takeover of the Senate and what that would mean for legislation reform and policies. At stake are a wide range of issues, including President Barack Obama’s judicial nominations, the future of the controversial Keystone XL pipeline and whether Congress takes any steps toward immigration reform.

Michael Barone, a political analyst and American Enterprise Institute fellow, said a Republican Senate takeover seems more likely than not. If Republicans do take the upper chamber, Barone expects the GOP to advance bills to approve the Keystone XL pipeline, repeal the federal health care law and maximize border control legislation, including additional limits on what the president can do to reform immigration policies.

The way I look at it is since nothing is getting done now, why not shuffle some people around
If they got to go, let them go....goes for both Rep. & Dem. a like

We need some new faces in there


Gotta wait until 2016 to see if Reid gets the boot

Wouldn't barry be under the same corporate masters? Or do they only control the house and senate.

Well crushing the demoncrats is a good first step. Unfortunately it leaves is with the republicrats who are just as bad IMO. Still a 50% win is better than nothing.

So hopefully the very first thing on the agenda is to impeach Obama. I know they'll never get a conviction but it's the thought that counts. Got to send that commie-marxist into retirement knowing that at least half of America thinks he should go to prison.

originally posted by: tavi45
a reply to: guohua

It's informative for those that would like to see a change, or at least a chance at one

And being as the source is a 'lefty', the numbers probably aren't skewed, which their result is kinda startling

He will use the Cabinet authorities as the vehicle.

Satan's Pride will be unleashed

originally posted by: snarky412
a reply to: guohua

The way I look at it is since nothing is getting done now, why not shuffle some people around
If they got to go, let them go....goes for both Rep. & Dem. a like

We need some new faces in there


Gotta wait until 2016 to see if Reid gets the boot

Unfortunately Pelosi's face is petrified from old age. So it will last forever. But, we can hope it's moved out of the Senate...

Yes, a shuffle of the deck would be interesting. With ebola now a new factor, constituents of the winning cards will be more vocal than previous years. Maybe they will listen, and move on securing our borders.

posted on Oct, 17 2014 @ 01:28 AM
link
a reply to: snarky412
It would be Very Nice to See the Rino's Get The Boot!
New Blood is always go for new ideas and new failures or successes.
Listen to the people, send the illegals back and Drill Baby Drill,,,,,, That'll Get The
Open Border, Pirus / Leak Driving Obama Voters Screaming! 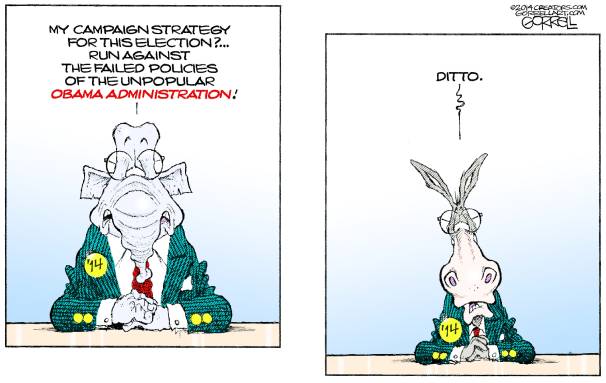 2) does not matter who wins

or for that fact who you vote for..
Hands are tied by necessity and dictate actions in the coming months
not ideology

posted on Oct, 17 2014 @ 01:29 AM
link
It literally couldn't matter less who wins. The American people get screwed regardless. As I've said in other threads Obama could get abducted by aliens or get impeached or just plain quit and nothing changes or improves.

Every political discussion just reminds me of that Scottish guys YouTube video before the independence referendum. "Bow to your imperial masters".

originally posted by: tavi45
a reply to: guohua

Also its messiah not miashia.

It literally couldn't matter less who wins. The American people get screwed regardless

originally posted by: tavi45
It literally couldn't matter less who wins. The American people get screwed regardless. As I've said in other threads Obama could get abducted by aliens or get impeached or just plain quit and nothing changes or improves.

Every political discussion just reminds me of that Scottish guys YouTube video before the independence referendum. "Bow to your imperial masters".

Then it could be assumed you would support a "3rd" party like Libertarians for example?
(Right Leaning of course)

Everybody complains, but yet no solutions or remedies.

Believe it or not, this election is one of the most important in history.

posted on Oct, 17 2014 @ 01:48 AM
link
If the Democrats keep the Senate and Republicans keep the house it's business as usual. The Republicans will make sure nothing gets done until 2016.

If the Democrats lose the Senate but get the House it's business as usual. See above.

If Republicans get the Senate and keep the House congress will pass as much inane sh*t as it can in order to force the president to veto and make him look like the real obstructionist.

If Democrats keep the Senate and gain the House things will be forced through for two years with no compromise or negotiation at which point we'll likely see a severe blowback by the voters with a period where Republicans get to do the same in 2016.

If this were a magic 8 ball, none of these things would say "Outlook good". You just can't have a functioning government when half the members believe they're on a mission from God to be uncompromising obstructionist political trolls because they only want to work with people who share their views.

It's such a messed up state of affairs when the Republicans by their actions can make a guy like Harry Reid who sent troops into war zones but then denied funding for ammunition, body armor, or medical care specifically to increase the casualty count for political points look like the good guy in all this.

posted on Oct, 17 2014 @ 01:48 AM
link
It honestly baffles me how anyone can still think any of this makes even the slightest difference.

How many times have we seen this movie? Don't we know the script by now? Maybe that's why Hollywood does nothing but remakes now--they've learned from Washington that people will buy whatever recycled bulls# you put in front of them as long as they're kept fat, drunk and stupid.