Belize says NO to sick US citizens

Update: Channel 7 news anchor Indira Craig has posted on her Facebook page that Belize Prime Minister Dean Barrow in a callous move in view of very close Belize-U.S. relations, has denied entry into Belize for the stricken U.S. nationals to be air lifted to the U.S.A. for treatment:


Reports tonight are that two individuals possibly infected with the Ebola virus are in Belizean waters. Local TV station Channel 7 monitored in the capital City Of Belmopan tonight, reported having credible reports that a couple from a Texas-based cruise ship presently anchored off Belize City, is on a ship tender, unable to return to the cruise ship, while being refused entry to Belize City to catch an air ambulance awaiting at the International Airport to take them to the their country of origin, the U.S.A.

As often as cruise ships get norovirus these people must be INCREDIBLY sick for them to think it is Ebola? From Texas? What?
edit on 17-10-2014 by ValentineWiggin because: (no reason given)


ETA: Apparently the update is that they are NOT showing symptoms but put themselves willingly into quarantine?????????
edit on 17-10-2014 by ValentineWiggin because: (no reason given)

Belmopan. October 16, 2014. The Government of Belize was contacted today by officers of the U.S. Government and made aware of a cruise ship passenger considered of very low risk for Ebola. The passenger had voluntarily entered quarantine on board the ship and remains free of any fever or other symptoms of illness.

Regardless, the ship was apparently ordered to leave and return to US waters...
edit on 17-10-2014 by ValentineWiggin because: (no reason given)

hmmmm Having a hard time finding another source but did find this Link but is basically just regurgitating the same information.


The patient exhibiting Ebola symptoms has been confirmed to be a nurse at a Dallas hospital traveling with her husband.

Dont know how i missed that... So this is one of the nurses??? It doesnt say specifically "a nurse that treated Duncan" but if not why else would they assume she had Ebola?

The ship is reportedly carrying 3652 passengers and a total population of 4633 persons.

posted on Oct, 17 2014 @ 12:47 AM
link
a reply to: [post=18546968]ValentineWiggin[/post
I would like to know if this was indeed one of the nurses who treated Duncan, because if so then that opens up a whole different round of questions. If this was one, and she was being "monitored" and allowed to leave... how many others have as well. What are they going to do with that many passengers if they have to quarantine them all? Where would they hold and keep track of THAT many people at one time? Its been proven the virus can survive outside of the body for hours if not days at the right temps- that boat could/would be crawling with it... i kind of dont blame Belize at all- maybe they know they dont have the infrastructure/containment to deal with a patient-let alone 3,000- and werent really trying to be callous? idk.. will definitely keep an eye on this

Obama administration officials say a Dallas health care worker who handled a lab specimen from an Ebola-infected man from Liberia who died of the disease is on a Caribbean cruise ship where she has self-quarantined and is is being monitored for any signs of infection.

But thats about ALL that article says.
edit on 533104512am31America/Chicagov by itswhatev because: (no reason given)


And another Here From the AP that has the exact same info as the above link but with one added sentence.


ETA it's interesting to note that since the almost all of the reports coming out from the US media are almost Identical. Very lacking in any information compared to the initial link in the OP. Almost as if they were all given the same info and told thats all they could print. They say she shows no signs... yet something prompted her to put herself in self-quarantine. Compare the OP article to the others... sounds like PR control
edit on 133115501am31America/Chicagov by itswhatev because: (no reason given)

I'm wondering if this was even someone that they were "watching'... wasnt the first nurse supposedly in a group they werent really monitoring or am i just remembering that?

Hopefully they release a little more information. I for one would not want to be one of those 4,000 people... nor the person who decided it was either ok for this "healthcare worker" to go on vacation, or that this person didnt need to be monitored.

posted on Oct, 17 2014 @ 01:06 AM
link
I used to cruise a bit and let me tell you, those ships are disgusting as it IS and viruses spread FAST. Norovirus is a constant issue and (until now) I had never used as much hand sanitizer/washed my hands as I did while I was on my LAST cruise.


Right, Pham was not being monitored she was... self monitoring?
edit on 17-10-2014 by ValentineWiggin because: (no reason given)

posted on Oct, 17 2014 @ 01:29 AM
link
I really can't blame Belize for being concerned ,,,if Ebola goes airborne , the Trade Winds will carry it directly towards them from the Ebola infected areas... 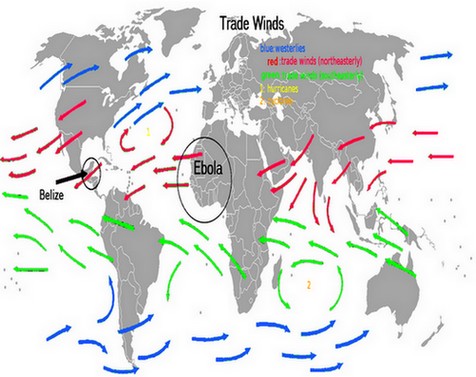 originally posted by: ShadowChatter
I really can't blame Belize for being concerned ,,,if Ebola goes airborne , the Trade Winds will carry it directly towards them from the Ebola infected areas...

Mighty fine job the CDC is doing there.


I think you're a bit off-base blaming Belize for anything.

Belize is being ultra-careful, something the USA seems to know nothing about.

If Ebola CAN be transmitted even slightly outside of the symptomatic time-period, we're talking about nearly 5,000 people...


Belizean news source whom posted this several hours ago is still standing by their original claim of the nurse having symptoms.


“Confirmed with representatives of the Ministry of Health that they have indeed received a report that there is at least one passenger on board the cruise ship, Carnival Magic, showing symptoms similar to that of the Ebola virus. According to the report made to MOH, the person exhibiting the symptoms did not come ashore today. The ship is reportedly carrying 3652 passengers and a total population of 4633 persons."


The official told the AP that the woman, who is accompanied by her husband, has shown no signs of the disease for 17 days.


Well, apparently as updates show, she does have symptoms. Seventeen days is not enough time! Now these poor people on board have to deal with this selfish behavior? Come on really, why the heck are these people exposed to Ebola are traveling so soon anyway?! That alludes to ill intent, or right out lied. Anyway here's the cruise ships FAQ - Carnival
edit on 17-10-2014 by dreamingawake because: (no reason given)
edit on 17-10-2014 by dreamingawake because: cruise ship link


Belizean news source whom posted this several hours ago is still standing by their original claim of the nurse having symptoms.


“Confirmed with representatives of the Ministry of Health that they have indeed received a report that there is at least one passenger on board the cruise ship, Carnival Magic, showing symptoms similar to that of the Ebola virus. According to the report made to MOH, the person exhibiting the symptoms did not come ashore today. The ship is reportedly carrying 3652 passengers and a total population of 4633 persons."


This has me crapping gold bricks:

“The Carnival Magic departed from Galveston Texas on Sunday, October 12 arrived in Mahogany Bay, Honduras on Wednesday October 15 and arrived in Belize this morning, Thursday October 16.

I was working the day they left and spoke with several cruise ship goers...

originally posted by: ValentineWiggin
Well well well... in times like these, you sure do know who your friends are

Ok so the US citizens are demanding that people from ebola infected country's be denied entry. And thats totally 100% cool?


But if another country does it too the USA that 100% unfair and horrible?


Its like you think being a American entitles you to special treatment.
edit on 17-10-2014 by crazyewok because: (no reason given)

posted on Oct, 17 2014 @ 03:47 AM
link
a reply to: jadedANDcynical
My prayers are with you and all those on that ship.
I think this episode proves that there are a number of selfish, stupid people out there.
I think the Belieze officals are incredibly wise not to allow an exposed person on their shores. I completely agree with their "abundance of caution" approach to the problem.
What sort of friend is the US when they allowed this person to travel while being monitored for ebola? Perhaps we should at least make those under "monitoring" give up their passports until it is clear they are disease-free.

originally posted by: ValentineWiggin
I don't like the sound of any of it!! How many other Dallas Pres Health Workers are in quarantine on vacation somewhere?

I'm beginning to wonder if our Government is paying for their damn trips. I read in another place she did indeed have contact with testing specimens from Duncan. I thought all those workers were *ordered* to stay at home and self monitor.
That is what was said during the Congressional hearing today.

See, people are so damn arrogant. This is what our real problem is, the human factor. They are the weak link.

I'm an American and I don't feel that way. I'm glad Belize did refuse them entry. Its just a real shame that they choose to expose the other over 3000 passengers as well. Personally I believe they ALL need to go in quarantine now. I mean,lets put those FEMA camps to work for something anyway.

You are wrong on your first point. Not all americans want to ban entry, especially the obama adminstration and the progreesive liberals. Gee, maybe that is why all are still free to enter?

You are wrong on your second point. I think belize is acting wisely and other americans on this very thread agree.

Other than that, your bigoted post made a lot of sense.