HOAX bin. No way he cancelled.

Really domo? Here is the link in case you missed what's going on in the really real world today www.nbcnews.com...#/storyline/ebola-virus-outbreak/obama-cancels-campaign-trip-ebola-meeting-n226536. Maybe try not being so rash in your posts without doing a little research first!

HOAX bin. No way he cancelled.

Really domo? Here is the link in case you missed what's going on in the really real world today www.nbcnews.com...#/storyline/ebola-virus-outbreak/obama-cancels-campaign-trip-ebola-meeting-n226536. Maybe try not being so rash in your posts without doing a little research first!

Are you sarcasm impaired?

Anyway,
Guess Obama got rained out for golf.

That's what I'm seein too. The media has begun changing their footing since the nurse's union got loud, information that wouldn't have been allowed a week ago is now live and CDC is shown to f# up left and right even though we all know on here that it's been months of that. I believe Frieden will get thrown under the bus sooner than later. Why let the general from the joint chief of staffs do a nice, scary interview questioning the handling of the CDC on the MSM if they didn't wanna brace us for military intervention?

Stated some may not be able to see posting because of privacy settings: Post reads as follows: People you need to be aware...........I have just been given information that a person from Liberia has moved into Nebraska city and even sold some of his/her belongings at a garage sale last weekend. Nebraska City is small town USA. If it can happen here it can happen everywhere. This person has been in the states for 3 days so incubation is another 19 days. I'm not trying to spread fear but make people aware of what is being allowed to happen.

I will love to see the "Swat CDC" teams taking the people into the camps,

I have just been given information that a person from Liberia has moved into Nebraska city and even sold some of his/her belongings at a garage sale last weekend.

Wonder if they had a permit.

SWAT in this case seems to be intended as experts having the medical expertise and equipment to handle the situation. A medical emergency response team.

I don't "think" they meant military as in weapons, etc.

Common don't spoil the fun, we know what Obama is trying to say, is just that is funny as hell.

posted on Oct, 15 2014 @ 08:02 PM
link
you know i read some of the post that say people are misunderstanding and and that people are over reacting, and i wonder if any of them understand the many different forms humor takes.
edit on 15-10-2014 by hounddoghowlie because: (no reason given) 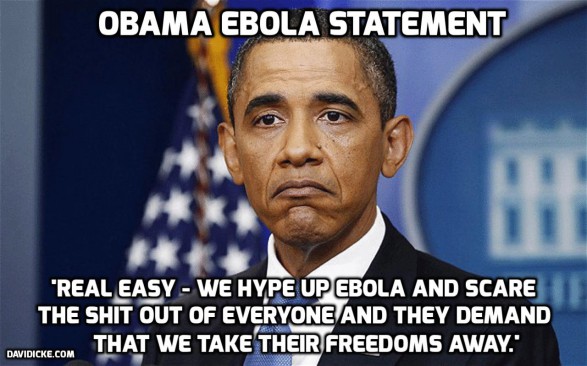 That sounds about right.!!

posted on Oct, 15 2014 @ 09:26 PM
link
What a joke. I am so fed up with this BS. First of all, someone has a cold, then this murder incorporated team moves in, maybe they shoot the person, but maybe they manage to successfully kidnap them, where they're taken to a hospital staffed by these psycho's and infected with that infectious TB or something until the ones they want to die and make a media statement about, do.

But I don't believe in this ebola. Diamond strike in Africa? Yes. Oil and resources? Yes. Power grab and really mean asshats who want to make everyone afraid? Yes. Ebola. False Flag.

posted on Oct, 15 2014 @ 10:01 PM
link
Ebola a false flag? How pathetic anyone would believe this. What a terrible lack of respect for those who have died in horrendous ways from this very real disease. Why must people claim every single disaster, disease, shooting, suicide, war, plane crash, event.. of any kind.. is a false flag covering up an evil agenda. Apparently actual wars, disease, crashes, shootings, etc.. don't actually occur in our world any longer. They are all products of some wicked evil villain's sinister plan to conquer the world.

And of course, nothing like pulling out the "martial law" flag at the first opportunity for ANY event in the U.S.

It's ironic... people cry that the government isn't doing nearly enough. So they announce an agenda to try and do more to try and combat this.. and BAM!.. "omg martial law!" They really can't win.. no matter what they decide. It is literally impossible for the government.. and it wouldn't matter what President was in office.. to do ANYTHING.. take any recourse, without being blamed for having a sinister agenda. No action.. false flag. Little action.. false flag. Take action.. martial law.

Obama cancelled 2 trips, you know it must serious!

If Nigeria can get there country to zero more infections that quick then there's no reason that we can't do it ten times faster and better...that is unless this is being spread in the states intentionally.

Oh my, watching the video now

In an unprecedented move to protect U.S. troops that might be exposed to Ebola, U.S. military commanders are being given the authority to quarantine troops for 21 days at a Defense Department facility where they will be monitored for signs of the disease and treated if they do contract the virus, a Defense Department memo explained.

originally posted by: MystikMushroom
I think what this means is that the people showing up will be rapid responders, and have heavy-duty equipment that is suited to highly deadly & infectious diseases. I seriously doubt snipers and guys with riot gear are going to show up over a case of Ebola. Bullets and kevlar aren't very good against a virus.

You mean like they should have with the first patient?

So does this mean the Commander in Chief will leave our troops there and not fly them home if they get it?