posted on Oct, 12 2014 @ 11:45 PM
link
I know those guys with the square and compass seem to get all the "secret society" attention these days, but I'm curious about the Loyal Order of Moose. Story time:

A few weeks ago, a friend and I were aimlessly driving around the small hometown, generally philosophizing and discussing things for entertainment on a lazy Sunday. We drove by the local Moose Lodge, and started speculating and joking around about it.

Me: "I wonder what they do there. I remember going trick or treating there one year when I was little, but thats about it."

Buddy: "I dunno. Worship the Moose, i guess."

Buddy: "Nah, its probably something lame."

Me: "Yeah, you're probably right. Besides, I doubt they'd be happy at two unwashed heathens coming in and questioning their beliefs. HOW DARE YOU QUESTION THE POWER OF THE GREAT MOOSE? BURN THE UNBELIEVER!" (I'm a bit prone to hyperbole in my sense of humor.)

Buddy: (long pause) "Dude.... I think you may have just explained everything about the way the world works.

(Yes, i realize this transcription sounds like two stereotypical stoners, but I assure you those days are behind me now.)

Well, I had kind of forgotten about that conversation until now.

So, ATS, I ask, what do you know about the LOM? Do you have a Moose Lodge where you live? Do you know anyone who is a Moose? I ask out of simple curiosity, since it seems the Masons garner most attention from those who claim to know about Secret Societies.

After a quick bit of a research, I found a few things that made my ATS-sense tingle, and motivated me to create a thread.

My mom and dad are members of the landers moose lodge near joshua tree. I have been their a few times mostly just old people hanging out shooting pool and drinking. Anyone can join you got to pay dues.

Doubtful its an abbreviation, they use imagery of a literal Moose. There's even a painted statue of a Moose overlooking the driveway of my local lodge.

Thanks for the input all. It seems to be a generational thing, I'm mostly interested in the historical aspects. Seems as though quite a few influential people were members.

There is a Moose lodge in Plymouth, MA, on Rt 3A

They are very active in community affairs, offer assistance to the poor and destitute, donate funds to many local and global charities, help the homeless, help our Veterans and mentor young children by sponsoring workshops in music, outdoor activities and trade career guidance. That's A Lot, and yea, they have a cool bar, with great camaraderie.

Here is a page from Wikipedia that will explain.

Yes they do a lot to help community, my parents donate what they can to help. Lot of really cool people their to..

posted on Oct, 13 2014 @ 12:05 AM
link
My brother-in-law was a Moose. He has no secrets. Just does a lot of charity work now that he is retired. He likes that everyone is older and allowed to smoke inside. He hates the Shriner's hat. Didn't want to talk philosophical with the Masons. Elk's dues was more than he wanted to spend. Never in the military so VFW was out. He became a Moose. All was going great in Moose land until they adopted a highway and wanted him to pick up liter. He still gets invited to smoke indoors as a Moose guest. In return he always helps them with their charity raffle and golf tournament. He doesn't mind the red information representative vest.


Moose International is a fraternal and service organization founded in 1888, consisting of the Loyal Order of Moose, with nearly 1 million men in roughly 2,400 Lodges, in all 50 U.S. states and four Canadian provinces, plus Great Britain and Bermuda; and the Women of the Moose with more than 400,000 members in roughly 1,600 Chapters in the same areas. It is headquartered in Mooseheart, Illinois.

Additionally, the Moose organization conducts numerous sports and recreational programs, in local Lodge/Chapter facilities called either Moose Family Centers or Activity Centers, in the majority of 44 State and Provincial Associations, and on a fraternity-wide basis.

posted on Oct, 13 2014 @ 12:09 AM
link
I looked up the 'Loyal Order of Moose Officer and Committeeman's Handbook.'
Unless there is something wrong with my browser, it is just a table of contents, and then a bunch of blank pages.
www.mooseintl.org...
Probably just another circle-jerk that is happy to take your membership fees.

Yeah, they're always in the local paper down here (OK) helping with charitable causes.

No one that has karaoke from 8:00 - ? can be bad.
Sounds like my kind of people. Gonna be looking into joining. Shuffleboard, darts and pool!

Starting to sound like an exclusive bar to be perfectly honest.

posted on Oct, 13 2014 @ 12:10 AM
link
We have an Elk's Lodge here. Judging from the descriptions above, it sounds like it's about the same thing... besides the choice of animal of course.

The Loyal Order Of The Water Buffalo

Thanks for the laugh. Seems like the Flintstones writers were having a bit of a jab at them.

Yeah, we have an Elk's Lodge here in town too, but its also where the country club is. Not my kind of people. Lots of snooty Halliburton executives and such around there.

Here's how to spot the differences between the two. 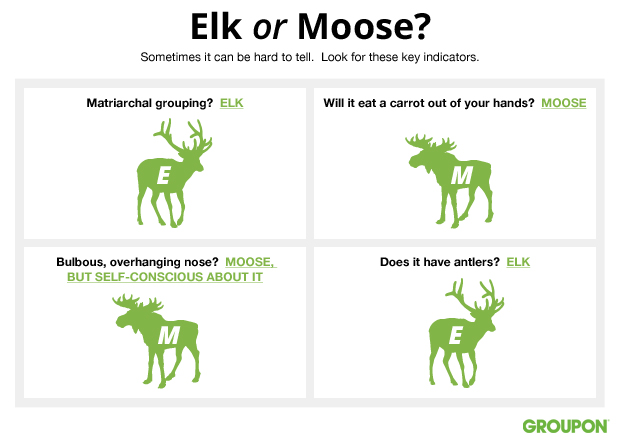 posted on Oct, 13 2014 @ 12:28 AM
link
my mom and dad are both members, they are basically like the american legion. a lot of older people clutching beers at a smoke filled bar while a band plays live featuring a lead singer complete with a comb-over! bartenders are almost just as old as the guests and the bands, and they love annual chili cook offs and dinners of the sort.

originally posted by: PFIscott
my mom and dad are both members, they are basically like the american legion. a lot of older people clutching beers at a smoke filled bar while a band plays live featuring a lead singer complete with a comb-over! bartenders are almost just as old as the guests and the bands, and they love annual chili cook offs and dinners of the sort.

My grandfather was a member, and played in a band. This is so spot on.

id go if i were you! you can eat chili and get swindled by the old dudes who still act like theyre bad at pool on the first round!
edit on 13-10-2014 by PFIscott because: (no reason given)

youre so right. im only 29, but in the 8 years ive spent visiting moose lodges, V.F.Ws, and american legions, ive learned this; all domesticated beer at between .75 cents to $2.00. MURICA! WHOO! and yes, the "good ole boys" are still around!