Construction of $1.4 Billion TMT Begins - 10x the Resolution of Hubble!

posted on Oct, 12 2014 @ 05:03 PM
link
Construction has begun on the Thirty Meter Telescope (TMT) which will sit atop Hawaii’s Mauna Kea volcano. 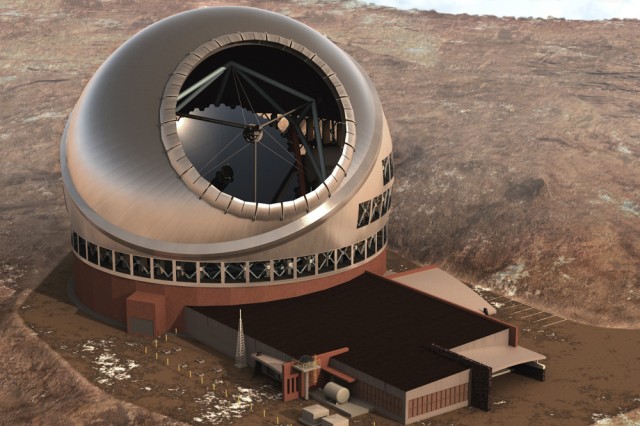 As the name of the instrument suggests, the Thirty Meter Telescope will have a total reflective surface that’s 30 meters (about 98 feet) in diameter. It will actually be composed of 492 small hexagonal mirrors that serve as part of the telescope’s new “adaptive optics” system. This might be the most important innovation of the TMT because it may save us from blasting expensive telescopes into space. Well, most of the time.


TMT will give astronomers a tool powerful enough to do long term studies on dark matter, supermassive black holes, and galactic formation. It could also assist in locating exoplanets out in universe until the more specialized instruments of the Webb telescope are online.

Construction begins despite and amid protests by local Hawaiians who hold the volcano as sacred and oppose any construction on its slopes. It's expected to be completed in 2022.
edit on 2014-10-12 by theantediluvian because: (no reason given)

Well the locals may be against it on spiritual grounds, but I am against it on grounds of good sense. Whether supposed dormant, or extinct, building such an expensive bit of kit on top of a mountain which used to hurl lava and molten rocks into the air, seems like a bloody stupid thing to do.

There are plenty of mountain ranges which are not strictly volcanic, so why is it that one of those was not used instead?

Locating high powered optical telescopes can be complicated. They have to be away from pollution, bright cities and ideally away from areas with persistent rain or clouds. I also imagine that the latitude and longitude also matter as to what portion of the sky can be tracked best.

posted on Oct, 12 2014 @ 06:11 PM
link
They would be better off sticking it on top of a donut shaped blimp with gyroscopic stabilisers.

Mauna Kea isn't the problem, Mauna Loa is. Mauna Kea is perfect for telescopes, as it's the tallest mountain in Hawaii, which places it well above any light pollution.

I think the weight of the mirrors (nevermind the supporting structure) would make your "blimp" idea, uhm... impractical...


There are plenty of mountain ranges which are not strictly volcanic, so why is it that one of those was not used instead?

By far, the biggest enemy of earth based telescopes is the turbulent atmosphere. The special optical designs, hardware and software of this machine are supposed to have revolutionary compensations for this, but it needs to be mounted in an area that is as isotherm-ally stable as possible.

Do not confuse my concern for a lack of awareness of the requirements of a good site for a telescope. I know that air pollution, light pollution, elevation, and a whole host of other things are factors effecting site choice for telescopes. But the thing is, if something totally unexpected happens with Mauna Kea, then that telescope will be a very expensive insurance pay day, and little else. Considering how fantastic the equipment and systems which are due to be used there are, I would have thought that placing them somewhere stable on the geological scale (that is for millions of years, not just ten, or a hundred thousand years) would have been a better idea.

With respect Zaphod, Mauna Loa may be the greatest risk of eruption of the two, that is not something I would dispute. But let us reason for a moment? Let us say, that a nuclear bomb carrying plane is on the way to a city, and everyone is crapping themselves about it. Let us also say that there is another bomb of the same exact size, hidden directly under a paving slab on a sidewalk somewhere. Just because people are expecting a nuclear bomb to hit them from above, will not prevent the detonation of the one below, and so is the case with Mauna Kea surely?

No one thought much of Mount St Helens before it turned itself into the worlds biggest rock firing cannon!

The last Mauna Loa eruption was in 1984. It started just below the summit, and covered 17 miles. The last Mauna Kea eruption was roughly 4600 years ago. It's considered a dormant shield volcano, and there is as close to zero chance of activity as you can find on the planet.

Even when Mt. St. Helens erupted there was warning well before it happened.

In fact, the Hubble mirror is only 2.4 meters in diameter, so even the existing Very Large Telescope, which consists of four 8.2-meter telescopes, is several times larger than the Hubble. The Hubble's current advantage is that it can focus on extremely faint and extremely distant objects for months on end, without the disruptive Earth's atmosphere or having to use complex adaptive optics. But for general astrophotography (i.e. creating beautiful, colourful, and detailed images of space), amateur astronomers with their modern equipment have already surpassed the Hubble.

Personally, I'm looking forward to seeing direct images of exoplanets around many stars.

I understand that, I just think that what you say about there being as close to zero chance of anything happening there, that you could find on the planet, is a little far fetched. For a zero chance, you want a mountain platform which has NEVER had anything to do with volcanism, surely? One which has no sedimentary features what so ever, no lava chambers beneath it, and never has had?

It is a VERY expensive telescope after all!

You're really worrying about nothing to be honest. As Zaphod said there has been no activity for thousands of years.
There are very few places suitable for these telescopes, and this is one of them - so it can be happy with it's friends:

Besides, where do you draw the line? You may as well not send anything into space then as it could either explode on the launchpad or get hit by debris in space. There's always an element of risk, but the likelihood of a Mauna Kea eruption is pretty much zero really.
There are plenty of volcanoes that at some point become extinct, even in the UK:

posted on Oct, 13 2014 @ 06:34 AM
link
As someone who has a great respect for Hawaiian mythology; I am deeply saddened by this. There is a reason why the hurricane only threatened the puna community and a reason why the lava is currently threatening them now. I believe if it is meant to be it will stay and if not the gods will take it away.

That is hardly accurate Zaphod!

Some of the worlds largest mountain ranges are produced from the collision of continental plates, which caused the Earth itself to rise up, much like the buckling of a car bonnet under impact in many respects. They were not caused by volcanism at all, but by the smashing together of two continental plates over time. The Alps, The Appalachians, The Himalayas, in fact, fold mountains make up the majority of mountains on the face of Earth.

The rest are split between volcanic mountains, erosional mountains, and fault block mountains.

Ok, so let's spend billions more building it on a mountain that requires survival gear to live on for any length of time. Or that requires pressurized buildings to live in. And can only be accessed by extremely specialized equipment, that can only carry up tiny portions of building and telescope at any given time.

Well that is the best thing about fold mountains... A) there are crap loads to choose from, and B) they are not all massive, impossible to navigate, or breathe normally whilst stood upon!

But who cares right? Its only the most expensive bit of optics we have ever pointed from the surface to the sky. You are more than likely right to say that there is no way that Mauna Kea will ever erupt again, but all I am saying is that it is not the ONLY choice for placing the new scope, it is just the one they made. Time will tell how sensible that proves.

Mauna Kea has the advantage of being low enough that they don't require any specialized support equipment. It already has a number of other telescopes already there, which means it has a number of personnel around to work it. It has a major roadway already to the facilities that they can use to move things. It has a major airport nearby that can support the largest aircraft around to fly parts and equipment in.

Those are why those telescopes are built where they are.

The volcano is high enough to rise above the cloud cover. It's located close to the equator, providing access to much of both the Northern and Southern skies. Too far north, and you loose much of the southern sky. Too far south and you have the opposite.

The volcanoes of Hawaii are generated by a hot spot that the Pacific plate is moving over. Once a volcano there goes dormant, it normally stays that way because it's lost it's source of magma. Mauna Kea will most likely never erupt again.

I mention Geopolitical because there maybe other countries that meat the above requirements, but may not be an area that astronomers wish to be located at.

originally posted by: TrueBrit
Some of the worlds largest mountain ranges are produced from the collision of continental plates, which caused the Earth itself to rise up, much like the buckling of a car bonnet under impact in many respects. They were not caused by volcanism at all, but by the smashing together of two continental plates over time.

And those large ranges are generally still quite seismically active, which seems to run counter to the purpose of your risk-aversion alternative, would it not?