She, for she was a female Pharaoh and was the last known ruler and the final Pharaoh of the Nineteenth Dynasty and in whose time Troy was taken or so it was thought by Polybius. She was said to have ruled Egypt from 1191 to 1189 BC. Her royal name, Sitre Meryamun, meaning "Daughter of Re, beloved of Amun".


Like many of her royal predecessors, Pharaoh Tausret constructed not only a tomb to receive her body in the Valley of the Kings, in western Thebes, but also a temple nearby to honor and sustain her spirit both during her reign and throughout time. Egyptian pharaohs of the New Kingdom era built such temples - known as, 'temples of millions of years‛ 1 - on the flat desert edge between the mountainous ridges that circle the royal valley and the cultivated fields that flanked the Nile. These temples often began to function during the kings’ lifetimes but also functioned after their deaths as a part of the afterlife machinery of the pharaohs – the other half, as it were, of the royal burial complex, though these New Kingdom royal temples were not simply funerary monuments. While earlier kings had constructed pyramids with directly adjoining temples, New Kingdom monarchs built their‚ 'temples of millions of years ‛ at a distance from their tombs.

Link to a free to down load pdf


The site on which the Temple of Tausret wa s built between that of the Temple of Merenptah, to the south, and the small Late Period Temple of Khonsuirdis, to the north, on the west bank of the Nile at Luxor.

Reconstruction of what the temple may have looked like before its destruction. 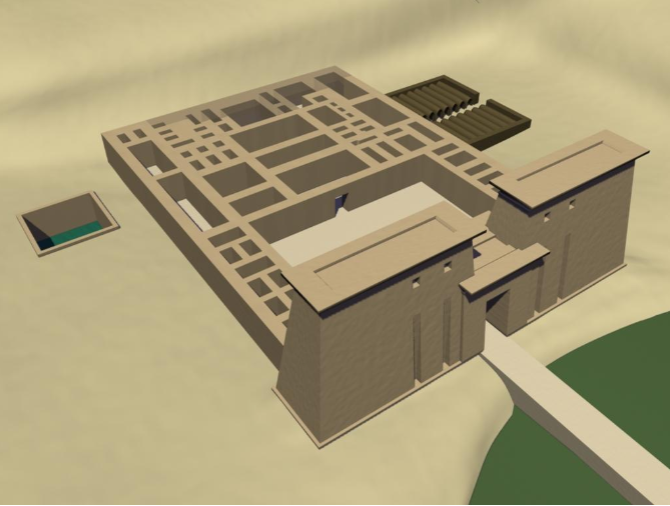 The pdf covers the history of the temple

Demolition of temple (some did not like the idea of a female Pharaoh) and the fate of the site up until modern times.