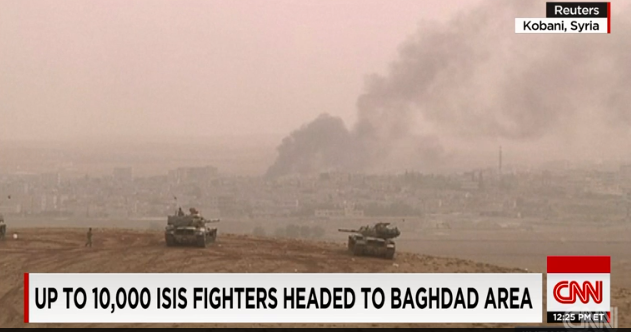 Some sources have reported within the last hour, that ISIS has made it to Abu Ghraib, only 8 miles from the capital.

The Islamist extremists appear set to take a key Syrian town along the Turkish border and an entire province on Baghdad's doorstep.

Leaders in Iraq's Anbar province pleaded for U.S. ground troops to halt the group's rapid, relentless assault. Officials in Baghdad and Washington have not given recognition to their appeal.

ISIS, the self-proclaimed "Islamic State" which also is referred to as ISIL, controls about 80% of the province, said Anbar Provincial Council president Sabah Al-Karhout.

Reports Saturday suggest the militants have encircled Haditha, the last large town in Anbar province not yet in ISIS' hands.

Should all of Anbar fall, the Sunni extremists would rule from the perimeter of Iraq's capital to Raqqa in Syria (at least), according to the provincial council's deputy head, Falleh al-Issawi.

They would control a swath 350 miles long.

I don't expect ISIS to attack Baghdad yet, considering the multiple fronts of which they are fighting, but concern grows as they approach nearer. They are likely to solidify their strength in Anbar province for quite a while, which is West of Baghdad.

Baghdad huh? So the battle for it begins.

And the war machine keeps grinding away in the Middle East...
edit on 12-10-2014 by Swills because: (no reason given)

I'm also disturbed about what this means for the US.

Because of using a half-hearted effort in that area. ISIS can say that they've beaten the US forces. If we were not there they couldn't say it. If we were there seriously, there would be very few left able to say it.

Now they have a new tool for recruiting. "The Mighty ISIS, victor over the US! Join today."

I am completely convinced that when a liberal gets unlimited power to run a country or an organization it all falls apart. Why he doesn't use the advice, experience, and intelligence of his advisors is beyond me.

originally posted by: Agit8dChop
Iraq's seemed so able to strike the US with IED's, ambushes and guerrilla tactics in the Iraq war from 03-08

Probably most of those who planted the IED's are now in or in support of IS.

posted on Oct, 12 2014 @ 02:44 AM
link
This is like that holy# moment in an action movie. Surreal. Surreal that our governments are holding back after countless rapes, beheadings, murders and kidnappings. This is the biggest threat the middle east has faced in centuries. After three wars in the region in the past 30 years alone, why this time are we not sending troops in??? What kind of pussy governments are we under right now???
edit on 12-10-2014 by funkadeliaaaa because: (no reason given)

posted on Oct, 12 2014 @ 02:44 AM
link
Yes, terrible ISIS. The phantom army that is advancing on all fronts. Threatening Iraq, Syria, Turkey and the whole world according to the western main scream.

In the face of Western air superiority I would like to now how they accomplish that. Unless they have figured out how to move their tanks underground…

Has anyone stopped to wonder why they haven't threatened a single pipeline in Iraq? Remember when Saddam left little Kuwait? He set the oil fields on fire. If this ISIS is so threatening, wheres the smoke?

The smoke screen is being generated by the media.

After all this newest round of fear bombing is done, the only mission will be ongoing strikes in Syria.

posted on Oct, 12 2014 @ 02:47 AM
link
It will end up being brother fighting brother like in the civil war. American soldiers against american ex soldiers on isis side. Same with brittian and a couple other western countries. Shame it is not hapening in the countries that started it all. This is the end result of decades of bad decisions and arrogant mindless western foreign policy backfiring. After Bagdad are liberated and returned to the rightfull owners guess who is next. History showed that Iraq is where empires come to be destroyed. History got a bad habbit of repeating itself.


Why he doesn't use the advice, experience, and intelligence of his advisors is beyond me.

No, wait a minute, it isn't. Elections are coming up. Nothing decisive until after the elections.

The penny drops. ISIS outsmarted our western asses well and truly. Or the whole things been grand orchestration all along.
edit on 12-10-2014 by funkadeliaaaa because: (no reason given)

Firstly, the title of the thread is dangerously mis-informative. "10,000 ISIS fighters advance towards Baghdad area".

This is derivative from a CNN article called, "ISIS could hold swath from northern Syria to the gates of Baghdad".

In the text of the article, it reads,

In Iraq, ISIS has dispatched as many as 10,000 fighters to Anbar province from Syria and Mosul in northern Iraq, an Anbar official said.
U.S. Defense Secretary Chuck Hagel has acknowledged the dire situation, telling reporters, "Anbar province is in trouble. We know that."

And in typical sneaky and subtle MSM fashion, the obscure statement is practically followed by the validating name of the US Defense SEC.
However, the DEF SEC said merely, the province is in trouble?!
Yes. No, the real US official did not say, "we have satellite images of no less than 100000 troops moving en masse.
The CNN video is qualified in the tagline "UP TO 10000 ISIS fighters..."

In the OP's second source, the 10000 number is not even mentioned.

It is a nice round huge number, to be wedged in the subconscious of the mainstream mind. As always, to instill fear and a sense of imminent danger to be confronted by the ceaseless Western war machine.


On another note, one of the OP sources acknowledged that the ISIS would soon control 3 of the border crossings between Turkey and Syria.
Here is another all too convenient situation for the Western powers.
The solution to this "problem" will be that NATO forces can take control of the key crossings between sovereign nations' borders.
Turkey being a NATO country, a supply routes will now be opened, allowing Western forces to roll right into Syria.
Which will be the next thing we see.
Because war with ISIS is a border-less war, like the wars on objects or isms, it will be used by globalists to destroy and build anywhere , regardless now of personal or national sovereignty.

posted on Oct, 12 2014 @ 03:12 AM
link
I don't understand why we can't bomb these morons into smithereens, it's not like Afghanistan, this is flat desert we're talking about here, they should be like sitting ducks out in the open if they are headed towards Baghdad. WTF?

10,000 ISIS troops heading towards and converging on Baghdad eh?

And nobody has considered what an easy and juicy target 10,000 troops would make to a drone squadron or bomber group and they are still breathing?

"It's not really an army at all, there isn't any ISIS, it's just a phantom army, they don't really exist."

Or, as a result of similar thoughts, "Don't do anything that might slow down ISIS you nasty US people. They're our current best hope for destroying you and that is what we really want, the destruction of the West."

Please, get back to the issue.

posted on Oct, 12 2014 @ 03:26 AM
link
a reply to: charles1952
I think most of us believe there is more to this than what we are being told... If America's response and policies are so inept at dealing with ISIS what does that say ?
Mean while, Turkey Hates the Kurds and seems to be buddies with ISIS.. Great Nato pardner there ?
This whole Op stinks to high heaven either thru stupidity or covert reasons.... Maybe both ?


America's plans to fight Islamic State are in ruins as the militant group's fighters come close to capturing Kobani and have inflicted a heavy defeat on the Iraqi army west of Baghdad.

The US-led air attacks launched against Islamic State (also known as Isis) on 8 August in Iraq and 23 September in Syria have not worked. President Obama's plan to "degrade and destroy" Islamic State has not even begun to achieve success. In both Syria and Iraq, Isis is expanding its control rather than contracting.

On Monday several Members of Parliament from Diwaniyah Province confirmed that ISIS killed over 300 soldiers using chlorine gas for the first time in Saqlawiyah, north of Fallujah.

Chlorine gas, like what was used in Syria lately?


Yep I thought so, jeez. From only a few days before the report above,


The US claims Syrian President Bashar Assad has broken the chemical weapons treaty he agreed to earlier this year, by launching chlorine gas attacks in Syrian villages. It comes as the Senate officially approved a plan to arm and train Syrian rebels.

I think ISIS is a myth,a creation of the media and the elites to justify wars and regime changes in the ME region.It is very hard to believe that the US/UK/Israel war machines with financial help from the Saudis can not take care of a couple of thousand desporatos with machine guns!...They are running around freely and are selling oil using their bank accounts overtly available to the bankers and governments...I mean how hard could it be to just freeze their assets and eliminate them all...This story is just as unbelievable as the 9/11 story.But then again a lot of people bought into that one as well.

Great reply and I agree.

From an extreme point of view, forgetting other issues like diplomacy, etc. There can't be any question in anyone's mind that if the US military was told by the President, "Get over there, kill ISIS wherever you find them and leave a system in place to spot them if they pop up again. Do whatever you need to do." ISIS would be destroyed.

Covert reasons? Maybe, but they would have to be earth shattering before I'd accept them. Letting ISIS kill tens of thousands, threaten regional stability, destroy cities and villages? There had better be a blasted great reason for letting that happen. Even the Pope is mad at them, and he doesn't get involved in this kind of stuff.

Stupidity? Ineptitude? Well, I can't point to any brilliant moves we've made in foreign affairs for a long while. If it is stupidity, I wish 2016 would hurry up. I don't know how much more stupidity the world can survive.

Just wondering if any members live in these areas?
Iraq and Syria?

I live in Iran but I am sure most people in Iraq and Syria are certain that ISIS has been fabricated and orchestrated by the westerners and the Israelis,financed by Saudis and Qataris.I have a couple of friends living in Syria and they tell me that the majority of Syrians know their country will have a better future with Assad than an American installed puppet serving western interests, despite all short comings and disagreements with Assad's regime...He is not perfect but who is really?!