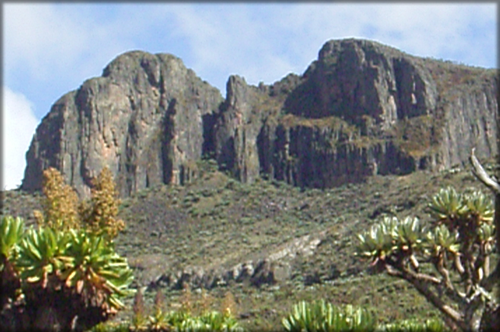 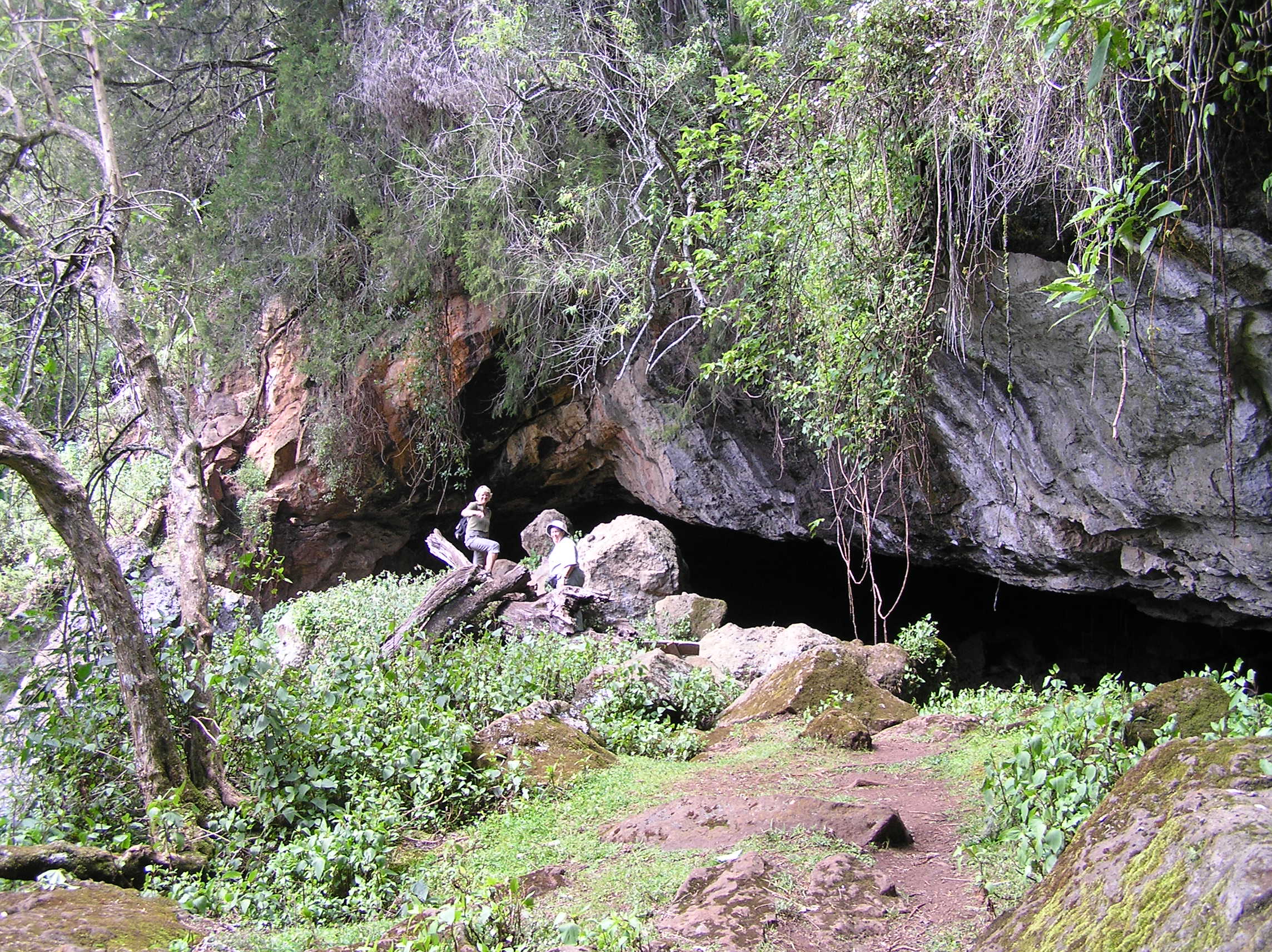 It is a place both sublime and terrible, of Miltonian, or Tolkeinesque romance, even. In the core of Kenya, paradoxically humanity's purported first home, and yet still among the most savagely primal places in the world, is Kitum cave.

Volcanic vents full of sulpherous exhalations. An ancient caldera. A vast elephant bone-yard at the bottom of a massive chasm. And all of this penetrating into the core of Kenya's 2nd highest mountain- Mount Elgon.

Kitum cave is the cumulative result of several natural forces working in concert over millions of years. The volcanism that helped build the mountain also left it penetrated by intricate tunnel lattices whose extents are both vast and unknown. More recently, the mountain has been excavated by elephants, who sought the salt deposits left by mineral erosion and bat guano. The elephants have expanded what are thought to have been originally very small entrances into vast caverns. The bones of many elephants unable to navigate the pitch-black depths are scattered over the bases of several great drops. The large parts of the cave which humans have been able to explore extend around 200-300 meters into the mountain, however vast, unknowable tube networks are believed to penetrate all through the mountain, and are likely home to bats and invertebrates living in a soup of detritus and guano. 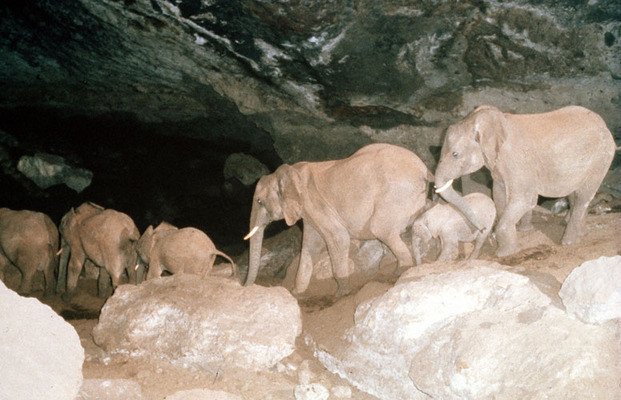 These caves have long been believed to be the incubation reservoir to many infectious diseases, most prominently the Marburg and Ebola Viruses, and with good reason; Mount Elgon is at the middle of the greatest number of the recorded outbreaks in Kenya. Bats and monkeys in the area have been anecdotally implicated in spread of the diseases nearly every time.

Just as the caves extend far beyond human knowledge, so too the life cycles of these two infectious agents. There are several candidates for the chain of carriage, however. Bats are clearly believed to play a core role in any hypothetical chain. They are believed to possibly not suffer from these diseases, but may be host transmitters that pass on the virus through biting other animals or humans, or in some cases being consumed by locals as "bush meat". 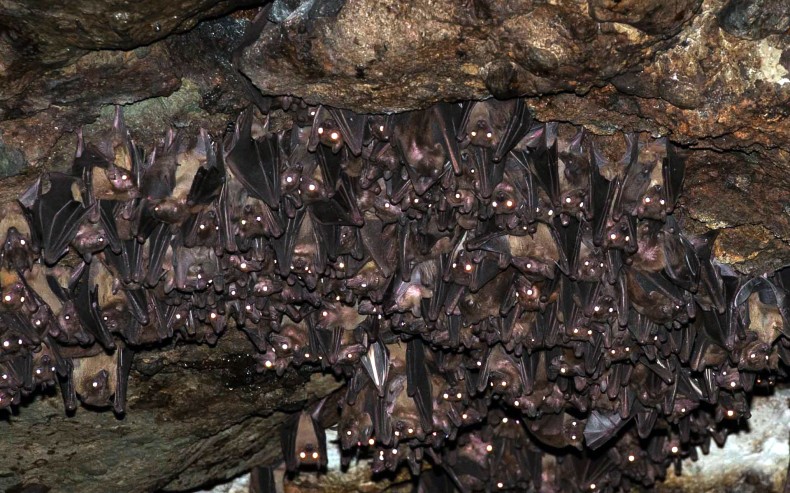 Even though they are the probably a major intermediary, that bats are unlikely to be the primary reservoir. That is more likely to be the thousands of species of arthropods that inhabit the cave. Mites, insects, small crab-like creatures, and many others living in and consuming the bat guano soup, especially hematophagus (blood consuming) arthropods have kept the viruses in their stores from time immemorial, and will continue to do so for millions of years, most likely. These viruses may even have started as breakaway chunks of plant DNA that entered the food chain at some unknown time in geological history. How the viruses first got there is unknown, however Kitum cave and several places like it will hold the diseases in their biological banks essentially forever.

Let us hope that this current outbreak can be contained well before it reaches the CDC's "worst case" 1.4 million infection scale projected for January, because Ebola, or Marburg, whatever this actual strain turns out to be, will become a permanent part of the human ecosystem, just as it has lived in the biological memory of places such as this. It is my belief that the outbreak will still be primarily be limited to Africa, not because of the argument that lack of proper medical facilities has led to a more acute spread, but rather because the life cycle and propogation is probably still intimately dependent on the chain of infection between the bats and the associated arthropods that serve as the reservoir. But as people say, with the rate of mutation being what it is, this is not unfortunately a foregone conclusion.

Read more about the role of these caves in the outbreaks centered around them in the Oxford Journal of Medicine and Infectious Diseases: 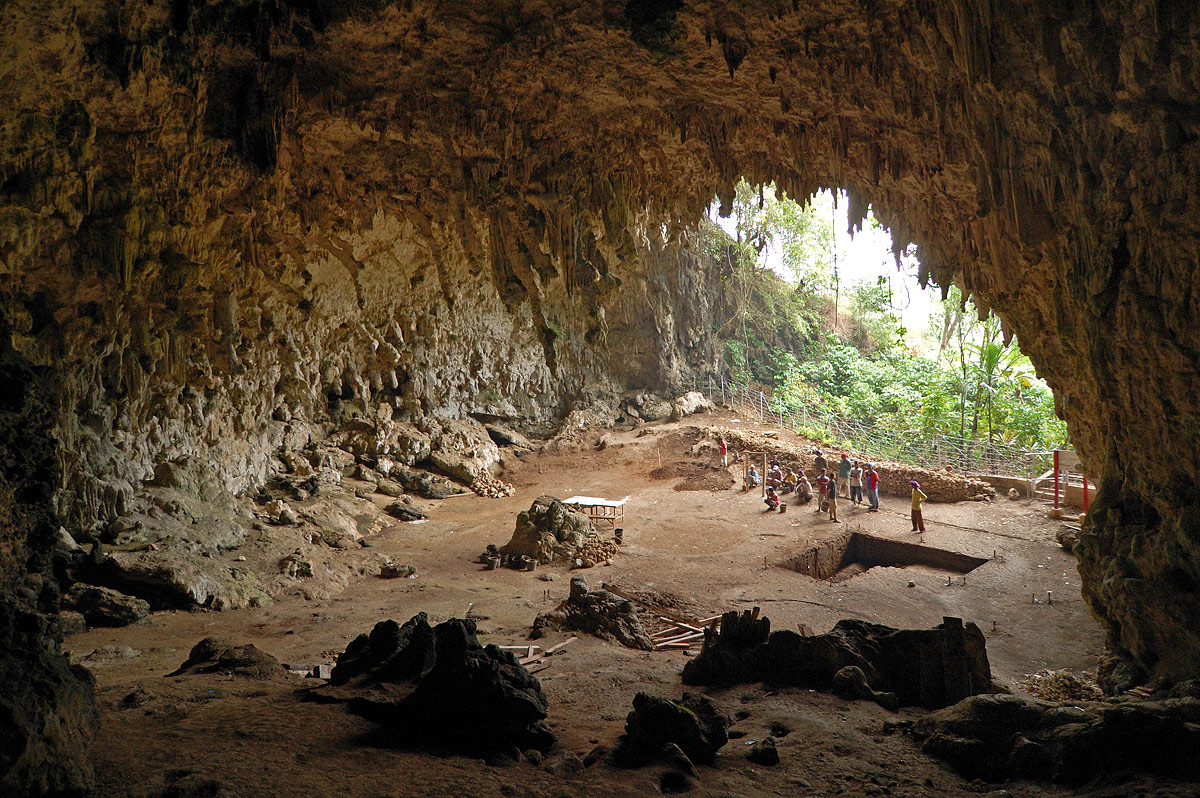 Apparently... it already exists. A guy named Richard Preston wrote a novel back in the 90's about the subject.

Problem with Kitchem Cave is that the army led an expedition into it to find the Reservoir of Ebola and they ended up slaughtering hundreds of animals and insects trying to find the carrier,and,nothing. They never could find what carried it. They do know that several people had been up there and contracted it afterwards. But were never able to prove that they caught it there or what they caught it from.

Also, Ebola is made up of RNA which makes it a very very ancient disease. I don't know if plant DNA could factor into that with it being made up of RNA or not.

posted on Oct, 12 2014 @ 02:59 AM
link
Still, the fact remains that two people that have contracted Ebola in earlier "micro breaks" both said they had visited the place. The one guy made love to his woman outside the entrance according to Richard Preston's book, The Hot Zone. In the last chapter he describes his own foray there, collecting his own samples from deep within the cave itself.

The cave is not produced by hydrology like most caves, but millennia of animals seeking salt. The elephants tusks are the primary movers. Every mammal for miles goes there to get the salt minerals that line the cave walls. Every sort of cave critter and those that prey upon them, every sort of rock crystal, mold spore, microbe and fungus grow therein, and two people that visited the region also contracted Ebola there.

posted on Oct, 12 2014 @ 04:03 AM
link
This is amazing. In all the stuff I have read about Ebola I have never come across this. What a big secret! I read a lot of science sites and magazines but never heard of this place. Thanks for the info! I feel sorry for the elephants though.

posted on Oct, 12 2014 @ 04:40 AM
link
The warrior tribe of the region, known as the Suk, were said to be fiercer then the massai warriors.....food for thought. Among their people they believe that illness is caused by a spirit known as Oi and they recommend doing everything one should not do to an ebola patient to drive away the spirit.

I have to admit, the more I look at the region from the perspective of an old Ats fan the more intrigued I am.

Reports of a dimetradon and a volcanic cave that reminds me of some Dragons lair, complete with elephant buffett. Stars and Flags...
edit on 12-10-2014 by Thorneblood because: (no reason given)

I always had my own dark vision of kitum after reading about the fellow infected wiyh ebola after exploting there. Didnt know elephants used the cave. Wonder if theyever eat seeds or anything infected.. what im asking do elephants get infected with ebola?

Also.. m pretty sure, despite a small Marburg outbreak, that the bug out reak is lnown to be Ebola.

Yeah, yet another Joseph Konrad moment. Africa has a talent for bringing out the absurdity of modern culture, and reminding us that we are not separate from brute nature.

While RNA is a bit older than DNA in the biological timeline, RNA is of course still present in all organisms. It serves the role of carrying messages from DNA to the ribosomes for protein construction, and also a different form of RNA participates in the joining of amino acids. This first form of RNA, mRNA is probably where the virus would have originated if from plants.

I am guessing since elephants are never great in number, and any dead would make a big impact, and also that since they have been at this for millions of years, the elephants of the area likely have powerful immunities to the many diseases that live in the caves.

It probably is Ebola, unless we haven't heard the full truth somewhere. It is a very different strain though than they are used to. It kills at a much lower rate, and lacks a lot of the classic hemmaragic effects, which means that it creates more survivor-carriers to spread itself. Diseases as nasty as the classical Ebola strains rarely spread far because they burn themselves out- not so with this version unfortunately.

originally posted by: Dimithae
a reply to: joeraynor
They never could find what carried it. They do know that several people had been up there and contracted it afterwards. But were never able to prove that they caught it there or what they caught it from.


The main reason the cave is highly uncharted is because of this fact. A cave is basically nature's dark, warm incubator where all sorts of wicked viruses and bacteria develop and thrive for millennia. It is an ideal breeding ground when you put bat droppings into the mix. There is a great chance any human who enters will contract the virus, or some other disease, unless they are in full hazmat gear. I wouldn't be surprised with the virus so abundant there in high concentration, an airborne mutation of sorts. When geared up however you are very limited to where you can go and what samples you can collect.

But yes, I do believe if antibodies to neutralize Ebola exist anywhere on earth, it is in this mysterious, ancient cavern.

And no one has thought to destroy the cave? Instead we want to find the source possibly infecting others. Im sure a small nuclear device could search and destroy just fine. No more out breaks

I think Mike Resnick wrote a book about it... let me look .... here it is "Seven Views of Oduvai Gorge". Not the same but similar and scifi. Love Mike Resnick.

I can't say the thought didn't occur to me a some point. While the tube network is probably incredibly hard to penetrate given its size, intricacy, and geometric shielding, there is probably some means of chemical sterilization that might work in this case.

It is one of those situations where there will always be consequences though. Maybe they can sterilize the cave, or seal off the known entrances, but then I could see major malaria outbreaks to follow as the bats that kept the mosquitoes in check are taken out, or any number of other unforseen events transpires. And while the cave is at the core of the historical outbreaks, I am certain Ebola now lives in all sorts of nooks and hollows, and is beyond being a simple target anymore.

Maybe it would be worth it, or maybe the consequences would be greater- it is hard to know.

Not to mention the mass potential the cave holds for a viable cure would be all but wiped out.

I have heard it proposed that in the horror-story case of the infection rate hitting the millions, that there will be a large pool of survivors as well at that point; these survivors may donate blood to the presently infected, and the antibodies present in the blood may give those currently struggling with the disease time for their own immune systems to adjust to fighting it off.

And I don't doubt places such as that cave may hold hidden biochemical gifts as well.