Newest member of the beezzer household

Bay is one lucky dog to be living with the Beezzer household.

Well congratulations to you! She looks beautiful... and sweet! The cows are always wanting in the yard (as they say the grass is always greener)... and she is protecting it fiercely! Wonderful animal you have...

THAT IS NOT A RABBIT!

(Just don't ask the cats for their opinion )

Taking her to obedience classes (even if she doesn't need help with obedience) will help a lot with socializing her. She'll have to learn to listen to you while being distracted by other people and dogs, in a strange place.

I would suggest that 'dog parks' are dangerous places (for any dog, really) but especially with yours (and mine) because if anything happens, it will be (seen as) your dogs' fault regardless of which dog 'started it.'

She is a smart dog.

Not sure how to socialize her more. ???

Get her chasing rabbits...it's a great way to make friends.

Not sure how to socialize her more. ???

Get her chasing rabbits...it's a great way to make friends.

Oh Beezer! She's beautiful! What a wonderful addition to the family unit!

Tell Bay we all said hi and to keep up the great work!

She's made herself at home!

I've been eyeballing a bull mastiff for our family. Just need to be sure we can afford a pup and get one that can learn not to eat the cats.

originally posted by: ketsuko
She's cute, just watch that wolf side. Do some study so you can be sure she stays the good dog you need her to be.

I've been eyeballing a bull mastiff for our family. Just need to be sure we can afford a pup and get one that can learn not to eat the cats.

We waited until we had the money and the house/yard to support a healthy environment for our new pup.

So many just get a dog without thinking of that.

What a lovely place and sweet looking girl you have there.

What a lovely place and sweet looking girl you have there.

Bay is adorable! Love how she's just lounging on the couch with her blanket and pillow, lol. So stinkin cut!!

Looks like she's going to be in heaven with all that room to run around and chase birds!

I used to raise German Shepherd-Wolf hybrids. If she's only 6 months old, she's still got the puppy in her. When she gets a bit older, she'll be 100% defender.

You have to understand the wolf psychology, but really it's not that different from people psychology. They get grouchy some times, but are gregarious with the family, and you'll never find a more loyal dog once they bond to their "pack" - which is you and yours. Once they're a year old or so, you can't even give them away, because they won't bond again.

kali74 is right, though - they can get pretty psycho. Of my two oldest ones, the mated pair, the male was all manner of laid back... unless there was a strange noise that he didn't like, or a stranger. He would get downright grouchy then, but with the family, he was nothin' but a big white fuzzy ball of lovin'. The female was a different story. She was so psycho she made Cujo look like a stuffed pomeranian. No one else but me could do anything with her. The woman I was with at the time used to get really frustrated because the dog just would not listen to her. She'd try to crate the dog if visitors were coming, and it was on when she did. All I had to do was go over and tap the crate, and she'd go right in, no trouble.

Most of the time, she'd just sit wherever I was and watch me. I never figured that out, but she'd just sit and stare, for hours. She weighed about 90 or 95 lbs (the male was around 145 lbs), and she never really figured out that she wasn't a lap dog. It's a shock to the system to have a 90 lb ball of fury take a running go to try and get in your lap by leaping. Not for the faint-hearted.

They saved my ass at least once, and probably more. Some dumbass came into my house through the back door one night at about 2300, thinking no one was home. They ran him out and kept him busy whilst I got my shotgun limbered up.

Good dogs, loyal dogs, but make the effort to understand their psychology - you'll be glad you did!

ETA: Here's a pic of the male - the female was camera-shy: 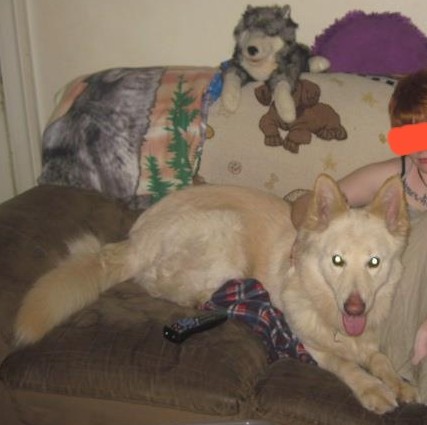