originally posted by: bigfatfurrytexan
ill probably be sharing another meal this evening. I found some lobster tails at a great price. Nothing fancy...just steamed lobster tails. But itll be good!!!

Post them all. You never know who is going to be inspired by our photos.

My typical evening meal is a tossed salad with a grilled protein. Not the sexiest thing to see day after day. The vinaigrette is a passion of mine....and you can't see the enormous flavor of it in a photo. I could show a photo of, say, a brown butter vinaigrette in the jar. But its kind of an ugly beige color. LOL

The winter season is around the corner. I foresee no shortage of Chicken Paprikash, and maybe an occasional roast/spaetzel dish.

I'm a bit of a minimalist eater during the week so I can indulge myself on the weekend. If I'm not having salad with chicken or fish I'm having homemade soup.

Makes me feel much less guilty when I throw a stick of butter into the mashed potatoes on a Saturday.....

posted on Nov, 2 2014 @ 11:09 AM
link
i had mentioned this meal. I just haven't gotten around to sharing pictures. Sure, i could put some effort into taking a better picture. But i usually cook all of it by myself, and when I am done I am ready to grab a fork and get started.

So i made a butterflied lobster tail. It was served with a melted butter/garlic sauce that I made using the immersion blender.

It was served with a garlic and butter tossed angel hair pasta with diablo shrimp, and some steamed spinach tossed with butter and white wine vinegar. The diablo shrimp is simply shrimp seasoned with salt, smoked paprika, cayenne, and garlic juice, then steamed until done I figured i better put this up before tonights meal gets posted.

Looks great. I like the ingredients for the shrimp, smoked paprika should be in everyone's spice rack.

What we have here is some of the best salmon in the world, wild Alaskan Copper River Red salmon. Because the Copper River is so long, these salmon have a much higher fat content than other salmon. They need the additional fat to sustain them in their long swim up the river. I believe my brother in law caught this one.

I made a simple preparation of the salmon with pesto, cheddar biscuits and some rosemary and garlic potatoes. This is by means not one of my more "elaborate" dishes -- but just something I threw together on a week night. One of the benefits of living in Alaska is having access to such wonderful fish... 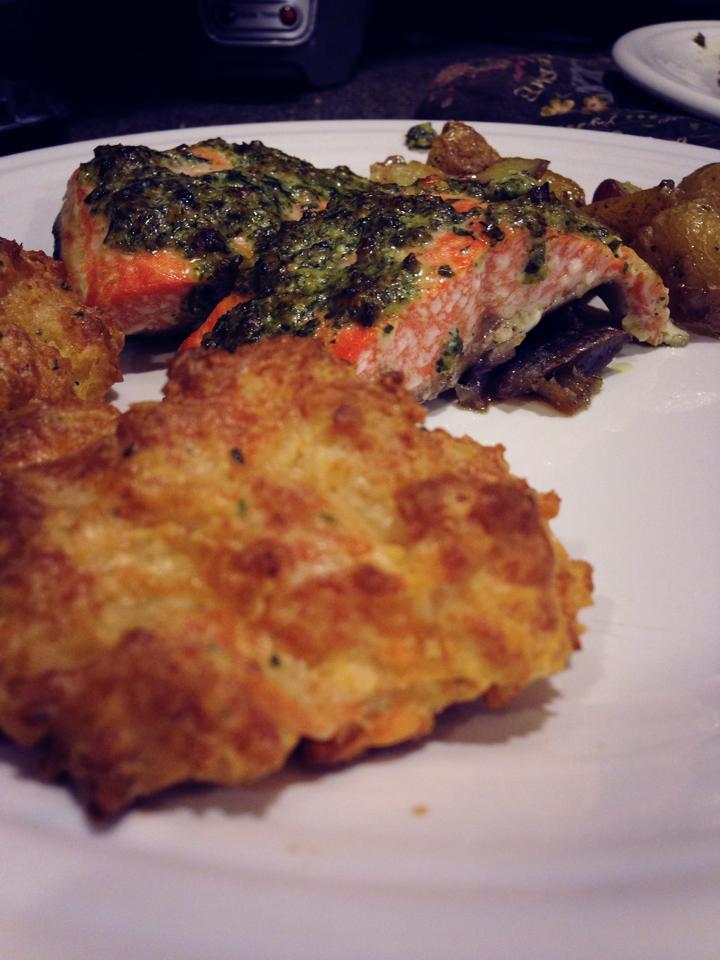 Here's day one of my Coq Au Vin: 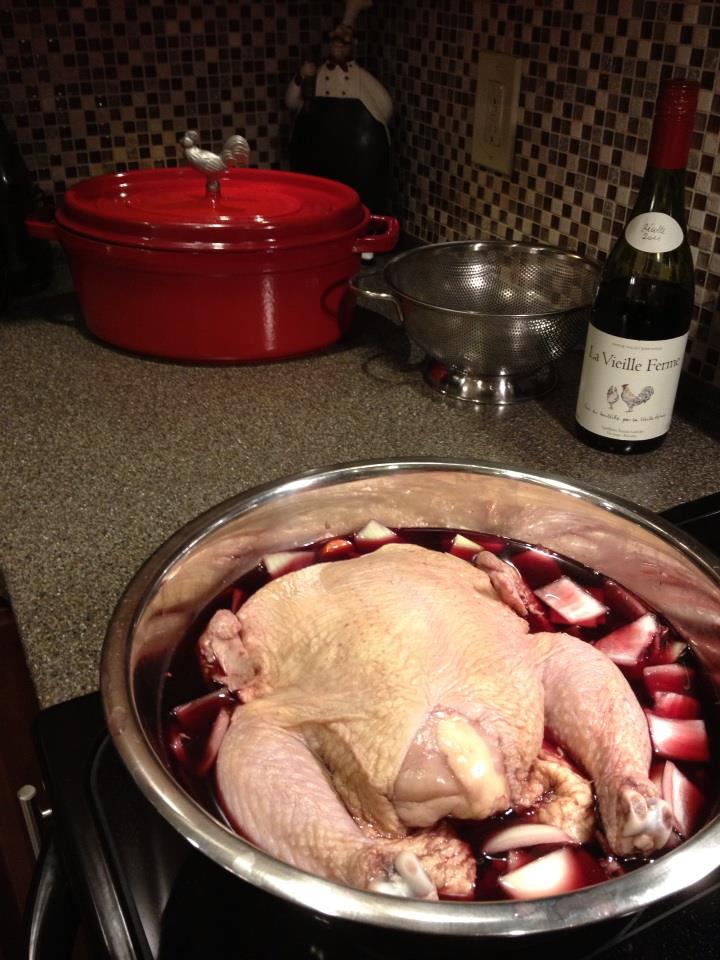 Here's some hickory smoked bacon, wrapped around jumbo shrimp with a spicy-maple glaze: 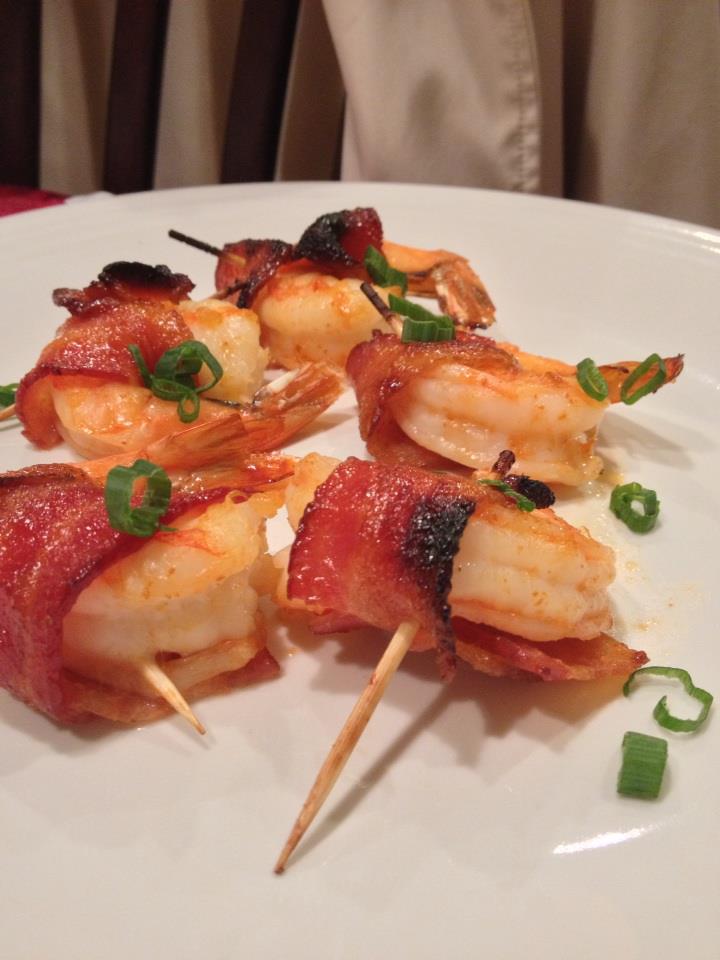 Some seared sea scallops with a saffron cream sauce, over brown rice: 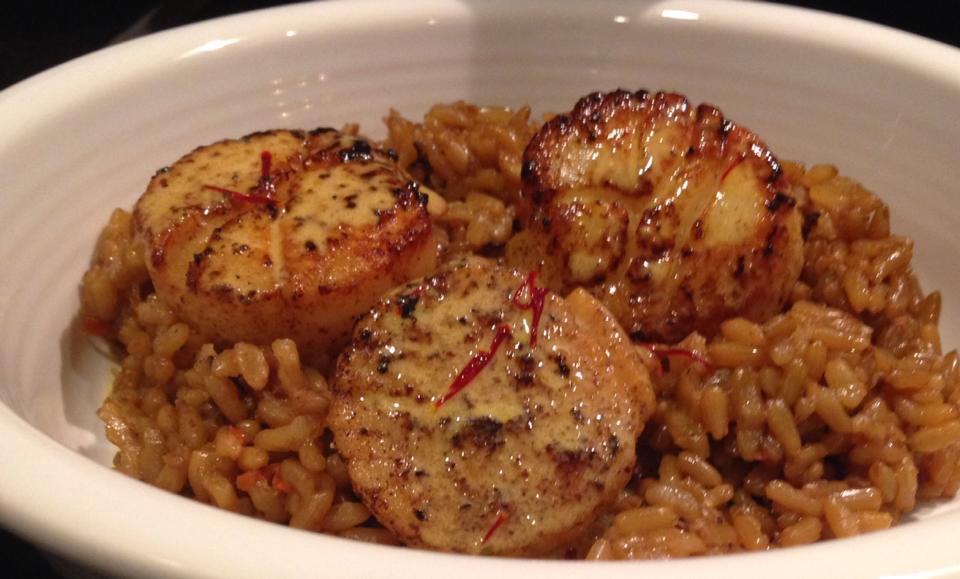 A beef wellington I made. The trick was to bake it on a wire rack above the sheet pan to make sure the bottom didn't get soggy: 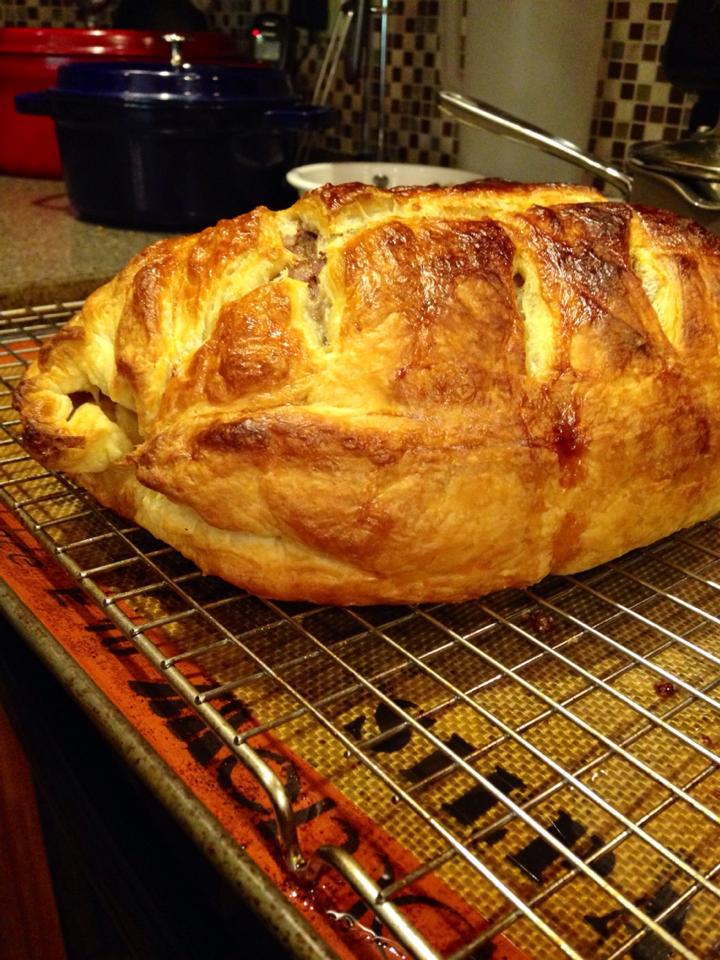 I like it, we have another hardcore foodie in the house.

posted on Nov, 7 2014 @ 11:01 AM
link
MysticMushroom: the scallops look like heaven. My favorite food item is scallops.

Last night I made chorizo grilled cheese. The mexican style chorizo (made from stuff like salivary glands and other less savory meats). I cooked it in a skillet, and then set it aside. On the sandwich I used thick sliced Buttercrust "Texas Toast" bread. Grilled with regular salted butter on my flat top. My cheese was queso oaxaca and queso asadero. While the internet may tell you they are the same....they aren't. Oaxaca is very similar to mozzarella. Asadero is a firm yet soft cheese that gets that stringy, almost soft rubbery texture when melted. It makes for a nice, long, 12" long string of cheese connecting your mouth to the sandwich.

The cooked a huge batch of Chorizo. So i will be making chorizo twice baked potatos tomorrow night along side a simple center cut eye of chuck steak. The poor mans ribeye. My favorite cut of beef. Ill post pictures.

We took a trip to the beach and whilst sitting in the sun and at peace with the world noticed a man in a dingy wearing a snorkel, he would go out into the sea and after 20 mins or so would come back drop off a sack and go back again.

After a few goes back and forth my ex decided to go over and see what he was doing.

She came back with a sack of hand caught scollops. They were big and there must have been about 4 dozen or so, She paid £10 (16 dollars).

We took them back to the camp and got a fire going. We sat there drinking mead with a bunch of crazy hippys, witches, druids and wizards taking a scollop from the cooler, cleaning it up and putting them back into the shell with some olive oil and a smidge of garlic a twist of pepper and a sprinkling of sea salt and cooking them in the shell on the fire passing the cooler around as we went.

I will never forget how simple it was and how good it tasted.

originally posted by: bigfatfurrytexan
The cooked a huge batch of Chorizo. So i will be making chorizo twice baked potatos tomorrow night along side a simple center cut eye of chuck steak. The poor mans ribeye. My favorite cut of beef. Ill post pictures.

Looking forward to these.

Ok so what was on the menu for the weekend? You too BFFT and the rest of the foodies? Got to have my fix. lol

Ok so what was on the menu for the weekend? You too BFFT and the rest of the foodies? Got to have my fix. lol

I made spiced kefta tagine last night. It isn't the most photogenic dish so I deleted the photo but it tasted damn good.

ill be posting a picture of the most wonderful 1.5lb boneless ribeye from last night. and a freakishly large half of a potato made into twice baked potato.

Tonight im making a nice grilled chicken with alfredo pasta. Basically a plate full of white. If it looks like something other than that, ill share. Either way, once i get the wife up and out to work tonight ill post some stuff.

Ahhhh addiction soothed lol. If the food isn't pretty a recipe is almost as good. That goes for you too AugustusMasonicus a spiced kefta tagine sounds wonderful, but you can't assume all of us know what that is.

originally posted by: Iamschist
Ahhhh addiction soothed lol. If the food isn't pretty a recipe is almost as good. That goes for you too AugustusMasonicus a spiced kefta tagine sounds wonderful, but you can't assume all of us know what that is.

It is a very popular Moroccan dish. Recipe is as follows:


Mix the lamb, parsley, cinnamon, cumin, cayenne and half the onions in a bowl and knead until fully mixed. Add salt and black pepper to taste.

Heat butter in a tagine (or heavy covered skillet) and sauté remaining onions, ginger and chilies until the onions begin to brown. Add the cilantro, tomatoes, saffron and lemon juice and cook for 2 minutes more.

Add stock and bring to a boil.

Form lamb mixture into walnut-size balls and place into pan. Reduce heat to a simmer, cover and cook for 20-30 minutes

Remove lid and cook for additional 10-15 minutes to reduce and thicken sauce. Serve with bread.

posted on Nov, 9 2014 @ 10:24 PM
link
As promised, except instead of the center cut eye of chuck, i was smitten by some ribeyes I saw while at the store yesterday. Well marbled, USDA Prime, thick cut ribeyes. About 1 3/4 inches thick and 1.5 lbs. I love living in Texas. Since the steaks were so big, i decided we needed potatoes that wouldn't get lost on the plate with them. So i got some equally monstrous potatoes to make the twice baked potatoes from. Process is simple:

- bake your potatoes however you bake your potatoes
- Split down the middle
- Scoops the centers into a bowl, leaving a thin layer of potato attached to the skin (for structure)
- Use your favorite ingredients and a mixer to make the insides. I used table crema (mexican creme frache, basically), chorizo, scallions, and butter)
- Fill the hollow potatoes with the potato mixture
- Top with your cheese of choice. In mine the really white cheese is queso oaxaca, and the other is queso panela.
- Bake at 350 until its is all bubbly on top

The steak was just salt, pepper, and mesquite. Like any self respecting Texan. I figured the size of the potato and steak...nothing else would fit in my belly. So we nixed the asparagus.

I had a moderately priced pinot noir that was bland overall, but was rather pleasant on the back of the palate. I likely won't purchase that particular one again. It completely lacked that initial shock of fruity tartness and refined crispness that I look for in the pinot noir