The Solar System at Giza: The World's Oldest Book of Astronomy

The image below shows all planets to scale and 32 (31.4159625) Earths above the rest. A note here that we are using the equatorial diameters of the planets. 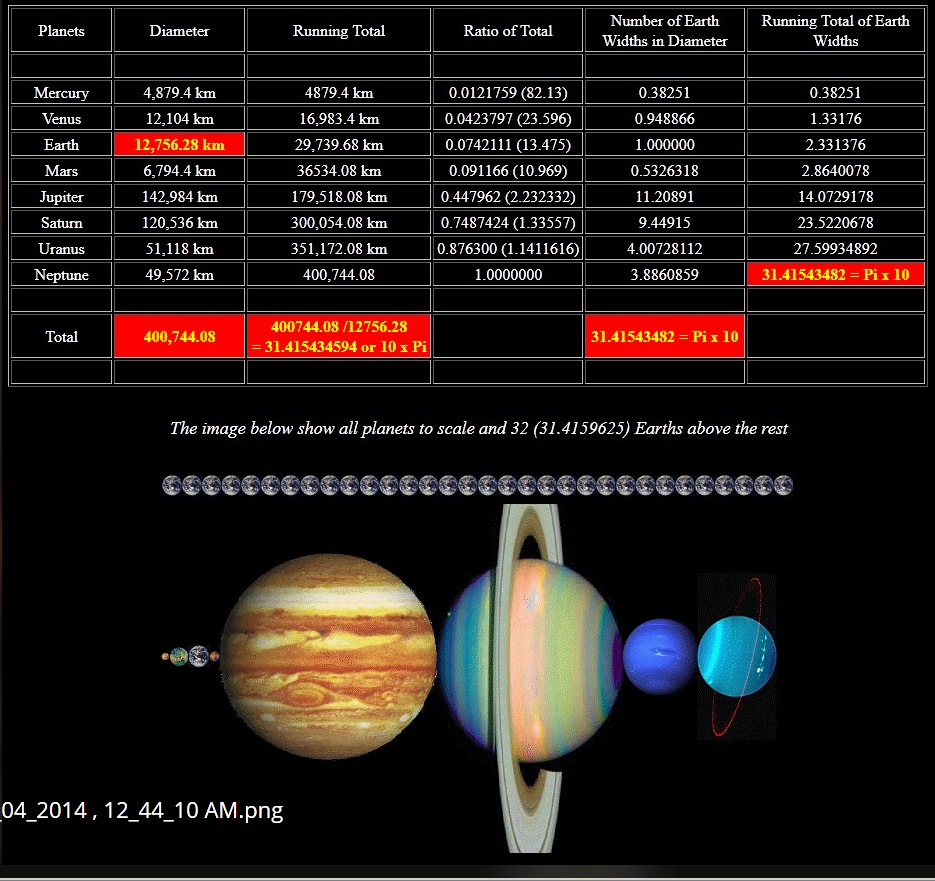 Don't mind you posting here as long as it's useful...

Broken link, no context, no idea what you are posting about.

Some don't have an imageshack account nor want one. Would you mind posting the pics? Sounds interesting.

How do I post an image on this board or are only links allowed ?

posted on Oct, 9 2014 @ 08:24 PM
link
a reply to: Ahatmose
Click on the little down arrow button on the bar at the right. Select upload and you will be able to upload your image. Copy the image into the reply and you're good to go. You can also check the board and business forum for a tutorial.


Pi in The Sky A Sign of Creation ? The image below shows all planets to scale and 32 (31.4159625) Earths above the rest. A note here that we are using the equatorial diameters of the planets.

posted on Oct, 9 2014 @ 09:06 PM
link
Hi all. Ever since (The Late) Clive Ross brought the curious fact that The Giza Plateau seemed to be a giant astronomy book I have been searching for various clues to either prove or disprove his thoughts. All my research seemed to show many measurements that would make his claim seem very real. This latest development seems to clarify a few things. This latest breakthrough came from the curious fact that if one uses Mercury's distance from The Sun as a base measurement then the distance to Mars is 3.936 of these units (57,909,100 KM x 3.936 - see diagram below) Immediately below see the solar system and their ratios and then below that see The Giza Plateau Solar System.

This works below because 440 (base of The Great Pyramid) times 3.936 is equal to 1732.05 which is the distance from north to south on The Giza Plateau

From the above chart then and using 440 equaling 1 to get the distances to the other planets we would simply need to multiply by 1.8686 for Venus and 2.5833 for Earth. This would give us 440 x 1.8686 or 822.184 cubits and 440 x 2.5833 or 1136.652 cubits. What follows comes as a direct result of me going in search of these distances at Giza. Below I did a quick scale job and thought that this was correct but after checking the actual measurements from Petrie's data it showed it was in error. It looked good but was wrong.

Before going on with the new stuff we should take a look at some of these earlier discoveries of mine which I am not sure if I had ever posted or not. In this first image, using 411.04 cubits as the base of G2 and also incidentally exactly what Petrie had measured for this pyramid on it's north side we get this curious fact. If we calculate the diagonal of this pyramid with 411.04 as a side we get 581.298 cubits as the diagonal. Calculating the circumference gives us [(581.298 x 2) x Pi] and this gives us 3652.41 - In case you can't see it this gives us exactly the length of The Earth's year in days times 10 (365.25 x 10 = 3652.5)

So could this be a reference to the planet Earth ? Is this telling us that The Great Pyramid is The Sun and the middle pyramid is The Earth? It would seem that it is. But there is much more compelling proof of this and it will follow shortly

However there are many curious references to Phi here at Giza as well and I remain convinced that the reason for this is because Phi is so important in the design and makeup of The Solar System (and probably The Universe). Below is an interesting image using certain Phi distances and ratios.

Curiously this number ratio shows up in almost all ratios one can imagine on The Giza Plateau as shown in the diagram below.

Below are even more examples of this curious Phi ratio in relation to The Giza Plateau.

But one of the best ones I feel is that Earth, our little planet, 3rd rock from The Sun, is, and this one can easily be checked, is 107.0466 times The Sun's diameter from The Sun. (1392000 x 107.0466 = 149008867.2) The error between the actual distance for The Earth from The Sun of 149,597,897.179 KM could be due to a rounding off of The Sun's actual diameter OR maybe this distance represents the actual distance FROM THE SURFACE OF THE SUN ! Regardless it would appear that Phi is definitely showing itself in certain ratios in Our Solar System and is obviously prevalent at Giza.. It could also be shown at Giza for the simple fact that it is telling us that this is the distance that The Earth is away from The Sun.

And as an aside here many people think that the arbitrary use of kilometers is incorrect but if one looks at the numbers it all fits so simply. Mars is 3.936 times Mercury's distance from The Sun, from The Sun. If we check we see that there are 2.54 inches in an inch and 3.937 = 1 / 2.54 - Further to this there are 39.3700787 inches in a meter so it appears obvious that all measurements on Our Earth were devised because of certain ratios in The Heavens. The most ultimate As Above ... So Below we are likely to ever find.

It is either Ra's will or the creation was as real as you and I and if not then I wish someone would explain why all our measurements follow The Heavens.

posted on Oct, 9 2014 @ 09:46 PM
link
There are many mathematical and astronomical considerations tied-in to temple and megalithic sites. The understanding of the ancients is awe-inspiring.


She gave me numbers... I gave her rhythm.

Cool OP. That is very thought provoking. I like it.

Thanks and here is my website where you can explore a bit more.

And there is tons more.

Please enjoy and all comments welcomed.

My eyes glaze over and I think of puffy clouds and happy thoughts when I see numbers and charts this extensive. However this is a lot of information and you didn't just "throw it together", it obviously took some effort and familiarity. S&F for the effort. I will come back when I have found a little more patience and re-read to make sure I learn something today.

..."It is either Ra's will or the creation was as real as you and I and if not then I wish someone would explain why all our measurements follow The Heavens"...

Hermes was the Person-Entity who brought mankind the Laws/Knowledge of/from the Cosmos
to the neo-lithic bands of humans...

so that the sciences, arts, medicine, civilization could spring forth...Hermes was from the Heavens

posted on Oct, 10 2014 @ 08:11 PM
link
This is beyond frustrating I spent over an hour making a post and then went to get an image to add and after uploading the image found out I had lost the entire post. As I said beyond frustrating and almost enough to make me want to move on. Why is the board set up this way ?

that One must 'SAVE' their copy/post/ in some form...or the ATS server, Program can 'eat-up' your communication

...after the post/text/reply by yourself is safely in the Thread sequence...only then can you delete your copy that's on your PC....if your using a 'device' then Its Tough Luck

I experienced many a 20 minute composition ...(either a continued OP...or a detailed reply post)... which 'just disappeared'


for important stuff I post... I use either the 'briefcase' file to create my post
or I use a 'word' document to originate my post....
I then 'copy & paste' my post into the sequence of replies...
only afterwards, when my post/text is published will I go back and delete that communication...

an ounce of prevention is the only alternative because there is no F5 keystroke to retrieve your 'lost' intellectual (shared) property,
at least not anything available to us 'members'

posted on Oct, 10 2014 @ 08:42 PM
link
Not to rain on anyone's parade, but seeing a set of hypothetical calculations carried out to ten decimal places based the Giza pyramids is pure fantasy. The Great Pyramid is not a perfect pyramid, from a mathematical point of view. It's peak is off center. It's four sides do not form a perfect square. None but a single portion of a bottom course of the casing stones remain, making the actual outside dimensions of the pyramid guesswork. (it's actual dimensions are: 755.43 ft; south -
756.08 ft; east - 755.88 ft; west - 755.77 ft., and that is only to the rough masonry remaining).

This type of fantasy math was best exposed by Umberto Eco, who proceeded to illustrate the divine mathematics behind an amazing structure that seemingly tied it's built dimensions and layout to that of the solar system and the universe, as if it were all created by a omnipotent being. What was this amazing edifice? The Great Pyramid? The Parthenon? The Vatican? None of the above, it was just a New York magazine stand. Like the "Bible Code" works with any book, this type of fantasy math works on just about any built structure.