Whats the best Item of clothing you have ever had. 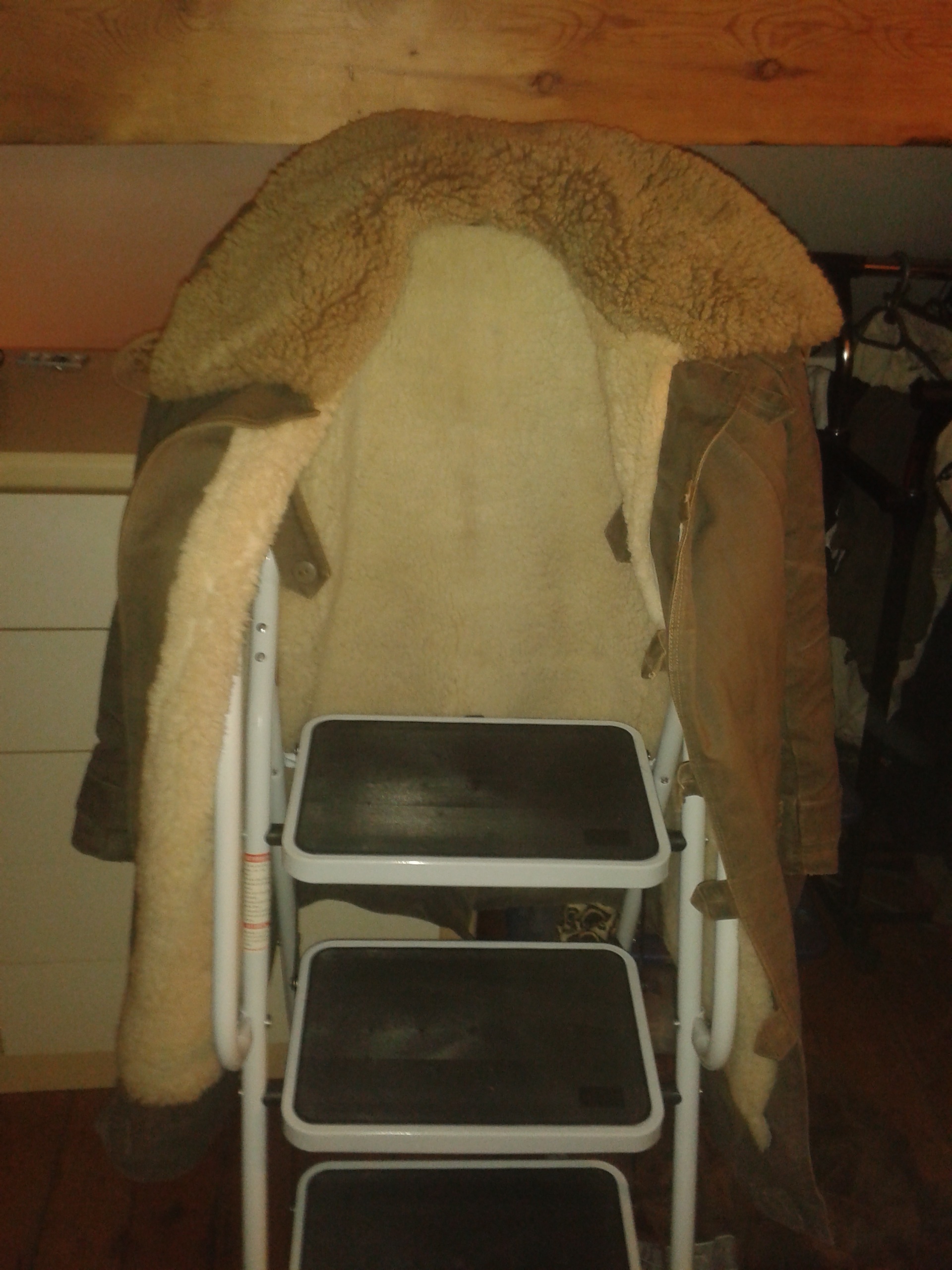 An original 1941 Swedish sheepskin arctic parka (it is 73 years old and as ggod as new all the original buttons).

I love this coat it weighs a ton but I have slept outside in it during last winter and still I undid it due to being to warm .
The best thing about it it cost me the price of a pint of beer when I ran pubs.
I have done a bit of research and it is considered the best made parka ever made.
Here is a little info.

Look at the pockets

I think this coat will last another 71 years and outlast me so whats the best bit of clothing you have ever had?.
Oh and no you can't buy it off me I already turned down 300 quid when I took it in to an army surplus store his eyes popped out when he checked it's markings
Gonna use it as long as Ilive .

My favorite is my calf-length leather coat. GORGEOUS and warm.

posted on Oct, 9 2014 @ 04:25 PM
link
I have a Stetson hat my Grandfather gave me when I received my MS. I only wear it for very special occasions.

I had an ugly blue cardigan sweater owned by David Hockney.

My grey Led Zeppelin T-shirt from their 77 tour in America. It was just an outline of Icarus with Led Zeppelin on top and United States of America 1977 below. I gave it up to Easter Seals a few years back

I think my fave shirt now is my Loki tee from welovefine. It's black, has Loki sitting on his throne and it says 'You Mad?' And 'I do what I want!' Also, Tom Hiddleston has the same shirt lol

Best shoes I've EVER had, no joke. They've yet to hurt my feet, they're just the right fine line between firm & comfortable to keep the tired, achy "been on your feet too long" feeling at bay. Heck, the soles aren't even worn down yet & I've put them through some outdoors abuse for sandals. They're so awesome to my feet that the sticker shock (even though I got them cheaper on Amazon) wore off fast.
If possible, I'd like to stick with this company & get my winter boots from them

All of which my wife threw out over the years with the exception of my silver belt. I think that was stolen once house party long before I met her....LOL


Now, nothing. I have nothing. Only my wife is allowed to have nice things she likes.

posted on Oct, 9 2014 @ 04:46 PM
link
My Ariat Pro Baby boots. Super comfortable and seemingly indestructible. I've ridden my horses wearing these boots nearly every single day for years, and I also wear them just about everywhere else as well. I also love the little blue stitched in stars!

A ex girlfriend bought it for me i had it on in 1997 when i was coming home from the hospital in Aberdeen at 2 am my car broke down and the outside temp was minus - 55 lots will laugh at that but f them that is what the wind chill factor was when i walked home ,the thing was miles to big and like a quilt but it saved my life that night .

posted on Oct, 9 2014 @ 05:06 PM
link
A dress I had in my twenties from Monsoon. In the days when I had Marilyn Monroe figure. It fitted me like a glove and I always felt fab in it (also turned quite a few heads those were the days! Alas twenty years later gathering dust bottom of wardrobe. I always used to daydream may fit back into it one day but wasnt to be.

p.s. Yes it is bloody cold up north tonight from a fellow northerner also sounds like roof going to blow off could maybe do with a coat like yours.a reply to: boymonkey74

I have a few velvet blazers that I wear out for dinner or drinks.

Please tell me you wear a cravat with the velvet jackets
That is so cool.

coveralls are the best thing you will ever buy.

originally posted by: boymonkey74
Please tell me you wear a cravat with the velvet jackets
That is so cool.

Hah. I'm not that cool. Usually a button down shirt, jeans and of course, a hat. 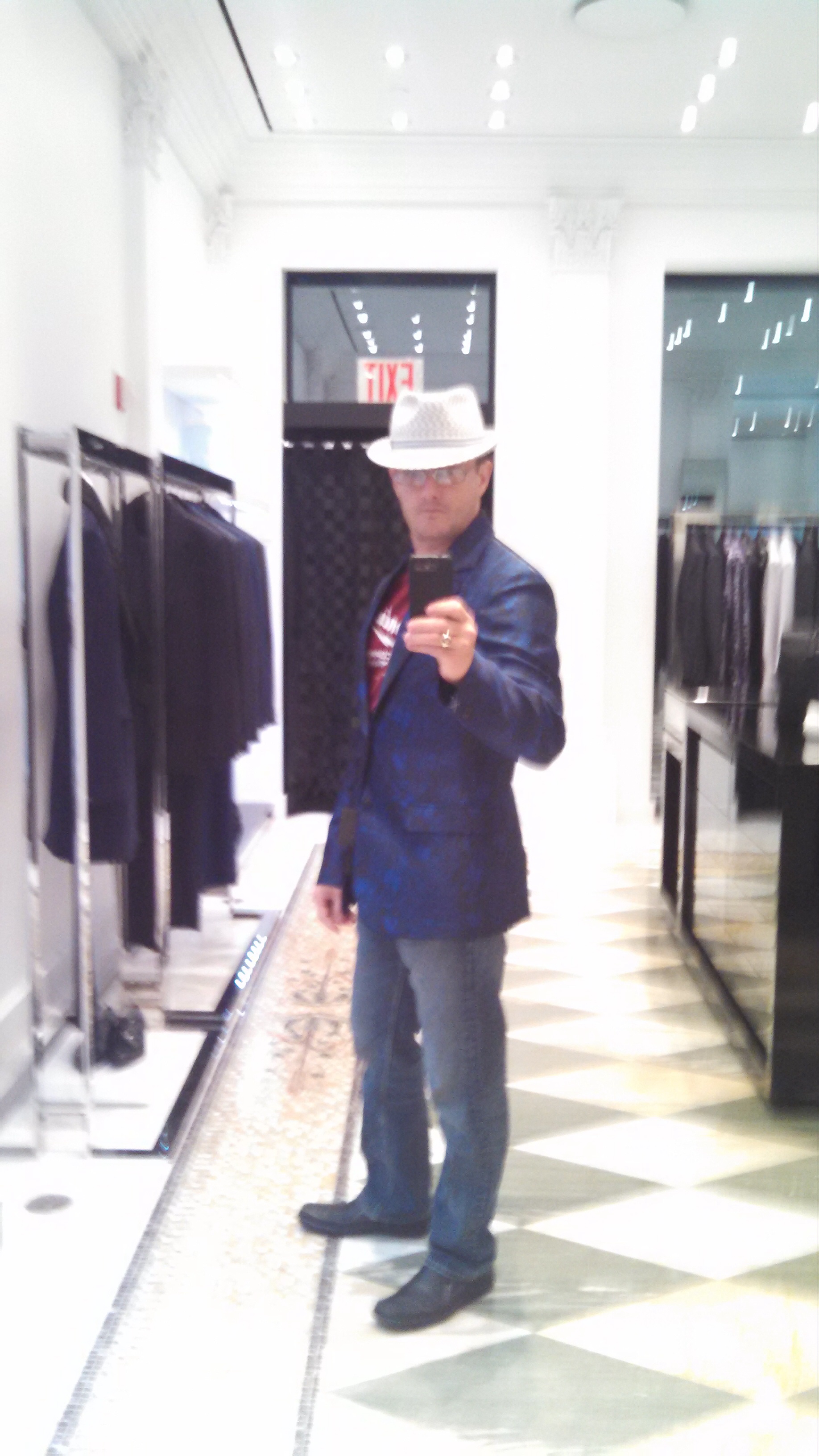 Both expensive but WELL worth the money

Well, my favourite piece of clothing is currently at the dry cleaners being mended. It is an ankle length Heeli trenchcoat. It is made of black leather, the thickest, heaviest hide I have ever seen, let alone placed across my shoulders. When I lived on the street, it was my blanket, my tent, my pillow, my sleeping bag, and probably saved my skin more times than I have any notion of, not to mention keeping the elements away from my body during less troubled times. I acquired it in 2003. It was the most impenetrable garment I have ever possessed.

However, as I am sure you can imagine, when one lives hard in a garment for that long, a toll is taken out upon it. In the case of this particular coat, sleeping in it stressed the stitching between the panels at the back of the coat, which began to open up, the leather itself, despite being treated at home on a regular although infrequent basis, began to loose its surface, to change colour, and the hem became abused by constant brushing against steps, stairs, boulders, and other things that I climbed down whilst it was about my shoulders. The lining became worn in a couple of places, and partially detatched from the outer, particularly around the pockets, in which I used to keep my heavy leather gloves, which rather explains the damage done.

The final insult done to this wonderous garment, was when I took it to a rock festival a couple of years ago. It was scheduled to rain heavily for a considerable portion of the weekend, and so I packed my coat, and it was a good thing too, as during the process of getting from the car park to the actual festival entrance, the skies were black with cloud, and the rain was falling with a will, or so I thought. It was only when the tents were up, and my gear stowed safely within, that the heavens really opened. Visibility dropped from more than a thousand yards, to less than fifteen feet, in an eyeblink. I dove inside my tent, mostly to keep my clothing dry, and knowing that sleeping in a tent full of water would be a sure way to ruin the weekend.

An hour and a half later, during which time my friends and I had been forced to communicate by way of opening our tents so that we could poke out our heads, and chat without our tents becoming filled with water, the rain came to a close, leaving a muggy, sodden atmosphere behind it. I stood up from my tent, placed my folding chair infront of it, and put my drenched coat over the chair to inspect it. It was SATURATED! We had to away to the festival arena, to take stock and get a feel for the vendors and facilities therein, and so I had to leave my coat in my tent, since it was far too wet to wear, as were the trousers I had been wearing so far. I changed out of my trousers and into a dry, fresh pair, and left my coat resting on a bin bag in my tent, because there was no where else to put it, and leaving it on my backpack would have been foolish, since it would have SOAKED my entire pack in minutes.

When we returned hours later, after the humidity had in fact increased, it was dark, and we all partied the night away, then passed out. When I awoke the next day, I took my coat out to see if it had dried. It had, but MOULD had begun to grow upon its outer surface in the humidity and enclosed space of the tent. I immediately went to the camp shop, purchased a vast amount of salt, poured it into a fresh bin bag, and placed my coat within, there to remain throughout the rest of the festival. The salt dried out the mould pretty well, but the coats surface was never quite the same after that.

I had only taken the coat to a rock festival because it was already a mess, but that final abuse was something shocking. Perhaps if I had not been partying so hard, I would have realised the risk, but alas, I was away with the metal fairies.

I recently had a very good experience with a local dry cleaning service provider, who also do alterations and indeed repairs to leather garments, and so I have tasked them to correct as much of the damage that coat has absorbed on my behalf, as is physically possible, without actually replacing the leather panels. The hem will have to lift by an inch or two, because the hem is so abused, and the lining will have to be re-attached with some sort of resin, to the outer of the garment, the seams will have to be tightened or re-stitched entirely in some places (where the original stitching has broken), and the surface will have to be treated with some sort of alchemical potion beyond my ken to improve it to a valuable degree.

But if there is a chance that it will return to me, even a shadow of its former self, then I would value that intensely. If all else fails, and it returns to me in a less than ideal condition for normal use, then I can always start a little project on it, add some sort of armour, or a myriad of band patches... but I would love to be able to use it for what it is for.

I love that thing so much it is silly. I just wish that life had not caught up with it so quickly. If it does return to me in a state which makes it ideal for normal use, then I can assure you, I will be looking after that thing from now on at least as well as it has looked after me when I needed it.
edit on 9-10-2014 by TrueBrit because: Added detail for clarification.

It was ridiculous. I looked awesome with my post-punk bad-ass self. Sue me, Madonna was jealous.

Special thanks to my GiGi....she kicked in.

There were 2....one was my full length brown fringe leather vest (ala Crosby, Stills and Nash style)...and a baby blue Hindu Nehru dress jacket that was heavy and looked like paisly upolstery material.

(Ah...but it was the sixties! )Come to think of it? I also had a realy cool white burlap-type dashiki shirt embroidered with gold thread around the edges!

posted on Oct, 9 2014 @ 07:36 PM
link
A black military pea coat, idk why, but it is my favorite clothing x)
It's practically the only coat I use entire autumn/winter xD