Brightest Dead Star Ever Has Just Been Found

posted on Oct, 9 2014 @ 08:06 AM
link
How beautiful is this? The leftovers from a supernova that is still more powerful than anything I can even conceive of... 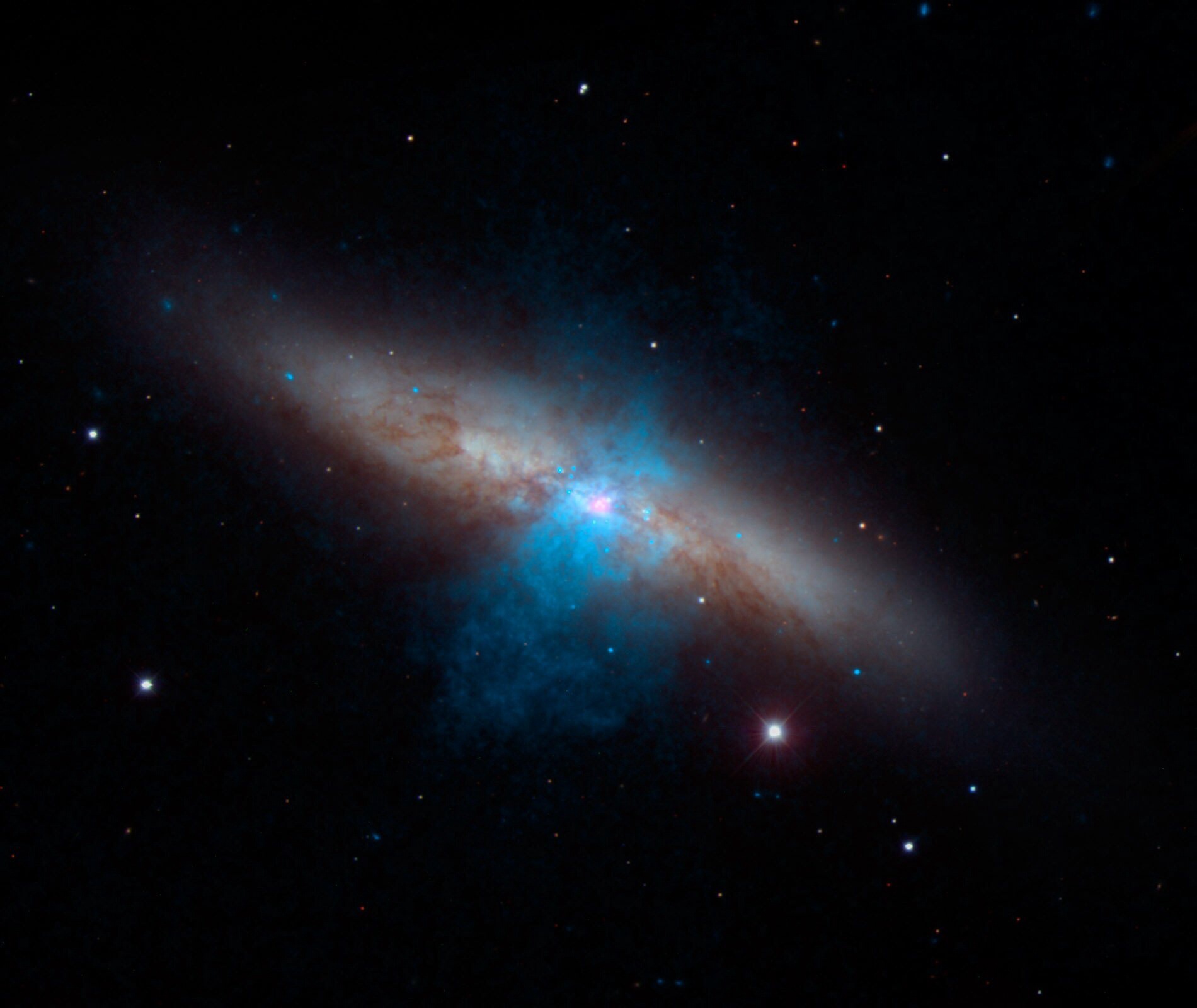 Astronomers using NASA’s NuSTAR telescope array have found something beautiful about 12 million light-years from our planet Earth: The brightest dead star, or pulsar, ever found. It’s only called a dead star because it’s the leftovers from a supernova — this thing is still very much alive, pumping out around 10 million suns’ worth of energy, according to NASA. Scientists originally thought the pulsar, located in the Messier 82 galaxy, was a black hole, but it turns out that isn’t the case at all.

“You might think of this pulsar as the ‘Mighty Mouse’ of stellar remnants,” said Fiona Harrison, the NuSTAR principal investigator at the California Institute of Technology in Pasadena, California, in a NASA release about the pulsar. “It has all the power of a black hole, but with much less mass.”

Pumping out 10 million suns' worth of energy? I can't even fathom our own suns' energy, let alone this!

I am continually fascinated by space and nature and just wanted to share this. I know that there isn't much information to be read on it, but it is beautiful and makes you realize just how small our tiny rock is compared to the rest of the galaxy/universe. And even though I grew up in a time where space travel has always been possible... I am still amazed that we can see and photograph things as magnificent as this so very far away from us.

It leaves me in awe... And I'm kind of glad that it still does.

You can read more here: time.com...

It might have been had they not been able to find him...

originally posted by: Restricted
a reply to: Kangaruex4Ewe

You are welcome! I thought it was stunning as well.

posted on Oct, 10 2014 @ 01:55 PM
link
Besides drawing attention to the beautiful sight of its host galaxy, this object offers us a new, intriguing mystery. As the article linked in the original post explained, they at first thought they'd found a black hole because of its high energy output. When they found it has only about 1.5 times the mass of the Sun, and noted that it was pulsing regularly (every 1.37 seconds) , they had to switch to calling it a pulsar, instead.
Fine, as far as it goes, but here's the puzzle: This object is about 10 times as powerful as a pulsar. It has been considered impossible for a pulsar to emit so powerfully. This object's relatively low mass seems very unlikely to be able to draw in enough material to cause the detected x-ray energy.
Black holes can smash together enough matter to create such a blast of x-rays, but they are substantially more massive than a pulsar, and have enough gravity to do this.
So, how can this object, which closely resembles a pulsar manage this, against all expectations?
Someone has even suggested that this could be the beacon of an advanced extraterrestrial civilization. If it is, it's presumably being force-fed an extraordinary amount of matter, well beyond that available in any known natural astrophysical scenario. Who knows, more detailed scrutiny of this object just may turn up something even more astonishing.
edit on 10-10-2014 by Ross 54 because: improved paragraph structure
edit on 10-10-2014 by Ross 54 because: improved punctuation
edit on 10-10-2014 by Ross 54 because: improved precision of text


Who knows, more detailed scrutiny of this object just may turn up something even more astonishing.

Like a flux tube z-pinch tapping the vacuum energies?

posted on Oct, 11 2014 @ 11:10 AM
link
Perhaps, if it's possible to access vacuum energy in this way.
This object is thought to be an accretion pulsar, since most that emit x-rays are such. In this scenario, most of its energy would be derived from in-falling matter, presumably from a companion star.
If this is the case here, some large difference from the usual situation of an accretion pulsar would be necessary to account for the anomalously high energy output.
Something along the lines of a companion star lying unusually close to the pulsar, and so, having more than the expected amount of material drawn off it, does not, for some reason, appear to have been considered. Perhaps such an arrangement would be dynamically unstable, and so, unlikely to exist long enough for us to observe it.
Some artificial manipulation of the companion star, so as to make it lose matter to the pulsar at an unusually high rate, yet not so high as to totally disrupt it, is conceivable, given a sufficiently advanced extraterrestrial civilization.

posted on Oct, 13 2014 @ 05:07 PM
link
It seems surprising that this object has such a modest spin rate, 1.37 seconds. If it is accreting matter from a companion star at a prodigious rate, as indicated by its extraordinarily high energy output, that matter should also be conferring a lot of momentum on the pulsar. It appears that it should be spinning much faster than it is.

Pulsars are reported to have a minimum beam width of about 5 degrees. If the beam width here were far less than that, it might make the pulsar seem much more powerful than it actually is. Of course, we would then have to explain why and how the beam of this particular pulsar is so much narrower than that of any of the multitude of others that have been discovered.
It would have to be something akin to an x ray laser, and the odds if its beam intersecting Earth by accident would become, well.... Astronomical.
Alternately, this object might not be an accretion pulsar, after all. But if it is not, what is it?